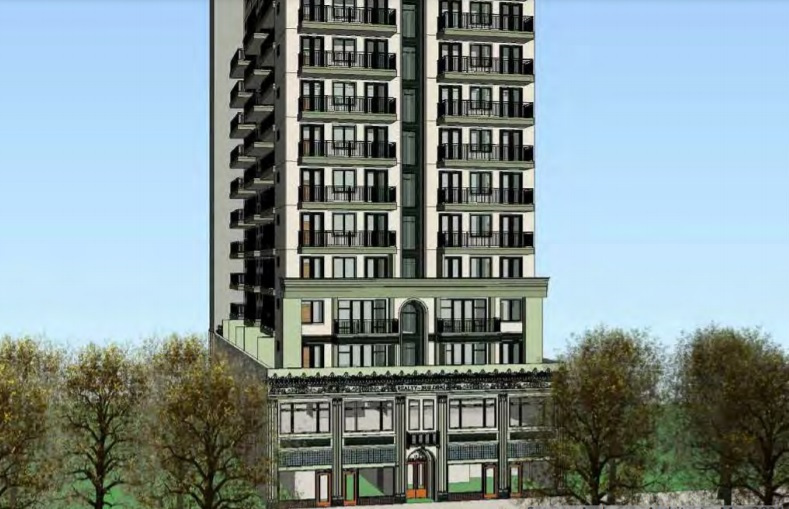 A downtown San Jose housing tower that would feature affordable homes for seniors, commercial spaces, and the preservation of the facade of a historic building has advanced to a wide-ranging public review.

The latest plans point to a slender tower that would be 22 stories high, a slight reduction from a preliminary plan that had envisioned a 25-story building, according to documents filed with San Jose city planners.

The residential tower would be built at 19 N. Second St. and would sprout around the corner from a future downtown San Jose BART station.

“The project includes a site development permit and a Historic Preservation Permit to demolish approximately 15,000 square feet of the Realty Building, a City Landmark building while retaining the street-facing facade and parapet,” the planning papers state.

A proposed 220 senior residences, all affordable, would be located on levels three through 22.

The details of the anticipated project are contained in a notice that city officials are preparing a full-fledged report to sketch out the potential environmental impacts of the mixed-use development.

A hearing to gather public input regarding the project is scheduled for Aug. 9 starting at 6:30 p.m., according to city planners.

The first and second floors of the project would contain about 18,600 square feet of commercial spaces. This would potentially consist of retail or restaurant space on the ground floor and offices on the second floor.

“A rooftop deck is also proposed for community open space,” according to the proposal.

The top deck would feature a rotunda, enabling the rooftop to be a gathering area for the residents.

“The whole roof deck is going to be accessible to all the tenants,” Anderson said. “There will be outdoor seating, a nice covered area. We eventually plan to light up the rooftop.”