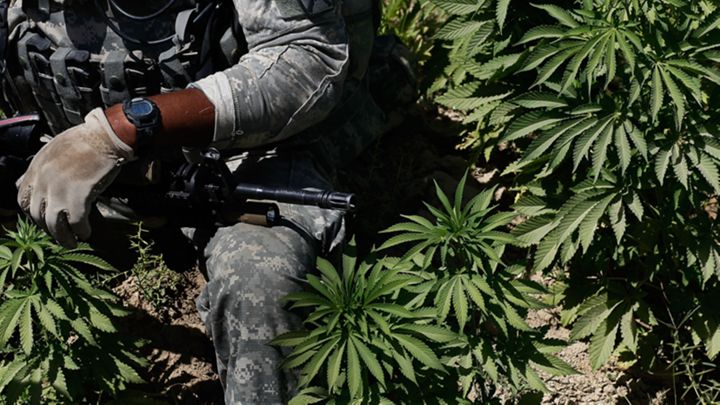 A group of local veterans is trying to raise awareness about mental health with the help of cannabis. The Marines founded Helmand Valley Growing Company after feeling the effects of post-traumatic stress. The veteran owned cannabis brand is sold in dozens of dispensaries in California and all profits go to veteran medical cannabis research.

“You have a lot of great men and women who went forward to fight for us and now they’ve returned and physically they’re back here but spiritually they’re not. We want to be that beacon of light to help them live that American dream that they fought to defend,” said Bryan Buckley, President and CEO of HVGC.

Buckley founded the company along with two other Marines. The former special operations Marines are Afghanistan veterans who returned home with physical and emotional wounds.

“Getting off the opioids was an eye opener. Stopping the bottle of Jack Daniels a night. Cannabis was that in between to help me step off,” said Andy Meyers, Director of Cultivation at HVGC.

HVGC sells cartridges that can be used with vaping devices. The cannabis sales go toward their non-profit, Battle Brothers Foundation. The goal is to fund research into the effects of cannabis on post-traumatic stress. Because of federal laws banning cannabis, the Veterans Administration has not approved its use.

“That’s when we had the opportunity to talk to members of Congress and said what would we have to do to get medicinal cannabis into the VA system. They said if you can get data and doctors you’re gonna have a good argument,” said Buckley.

Now, HVGC is working with an Israeli lab, NiaMedic Healthcare and UC Irvine on a study this summer involving veterans.

“It hurts. I have a lot of friends who came back and weren’t physically harmed, but didn’t come back right mentally. They left their soul in the valley,” said Meyers.

With their fellow veterans as motivation, the Marine Raiders are using cannabis to hopefully help with the trauma that veterans and civilians are now dealing with.