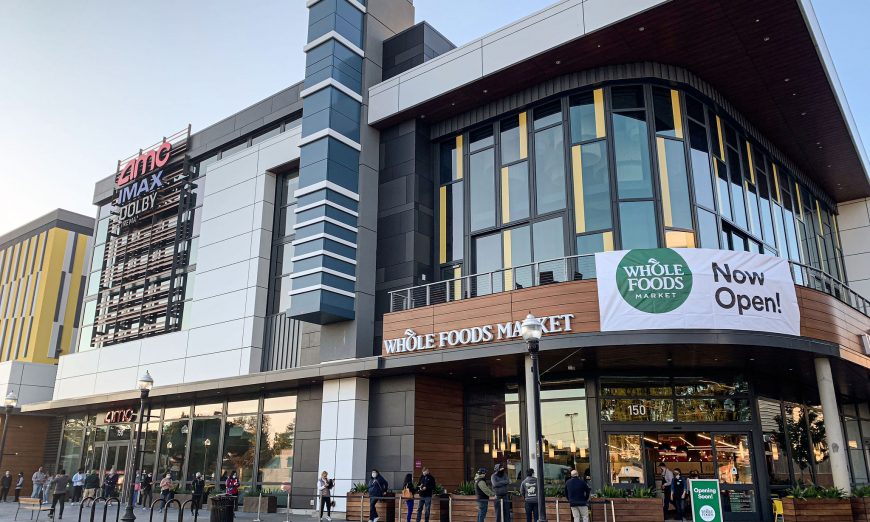 A quick reversal of fortune for the brand-new AMC Theater in Downtown Sunnyvale. Just weeks after it opened, COVID-19 restrictions have forced it to close again. Santa Clara County moved back into California’s Purple Tier because of rising COVID-19 cases and that means theaters, including the AMC must close.

The theater opened on Oct. 30 to 25 percent capacity under the state’s Orange Tier guidelines. It did not serve food or beverages, but was showing movies. Now, the reopening is on hold indefinitely.

“The AMC team has been incredibly resilient; the local team has been incredibly resilient. They’ve been working really hard. AMC has specific COVID protocols, obviously, they’re following the shelter in place requirements by the county, but they themselves have incredible cleaning requirements and things,” said Josh Rupert of Hunter Storm Properties, one of two developers involved in the Downtown Sunnyvale redevelopment.

The AMC Theater is expected to be one of the anchor stores in the new Downtown Sunnyvale. Whole Foods Market on the corner of McKinley and Murphy Avenues is another. That opened on Oct. 29 and will be allowed to stay open because it is considered an essential service.

The Whole Foods was also impacted by COVID-19. The March stay at home order delayed its grand opening by more than six months.

Even though it was delayed, the opening of Whole Foods marks another milestone in the new vision of what Downtown Sunnyvale will soon become.

“Rather than being just another grocery anchored center along El Camino, we feel like having a Whole Foods and an AMC for that matter, kicks off our center in a way that really differentiates us from El Camino and brings that shopper into Downtown Sunnyvale,” said Curtis Leigh of Hunter Storm Properties. “[It] really creates the downtown that we’re trying to give to Sunnyvale that they’ve never really had.”

Other stores will open soon. Xfinity and AT&T are both slated to open in December. Salon Republic was supposed to open before the end of the year, but the county’s return to the Purple Tier may delay the opening.

Developers are also starting the final phase of the project.

“We’re working diligently with city staff and ultimately, the Planning Commission to get the specific projects approved,” said Rupert. “We’re hoping that in January or February [2021], that we’ll start the demolition of the Macy’s building, which is really the precursor to beginning the next phase of Downtown Sunnyvale.”

Whole Foods is open 8 a.m. to 9 p.m. daily. It opens an hour early on Fridays for guests 60-plus, at risk or with disabilities.