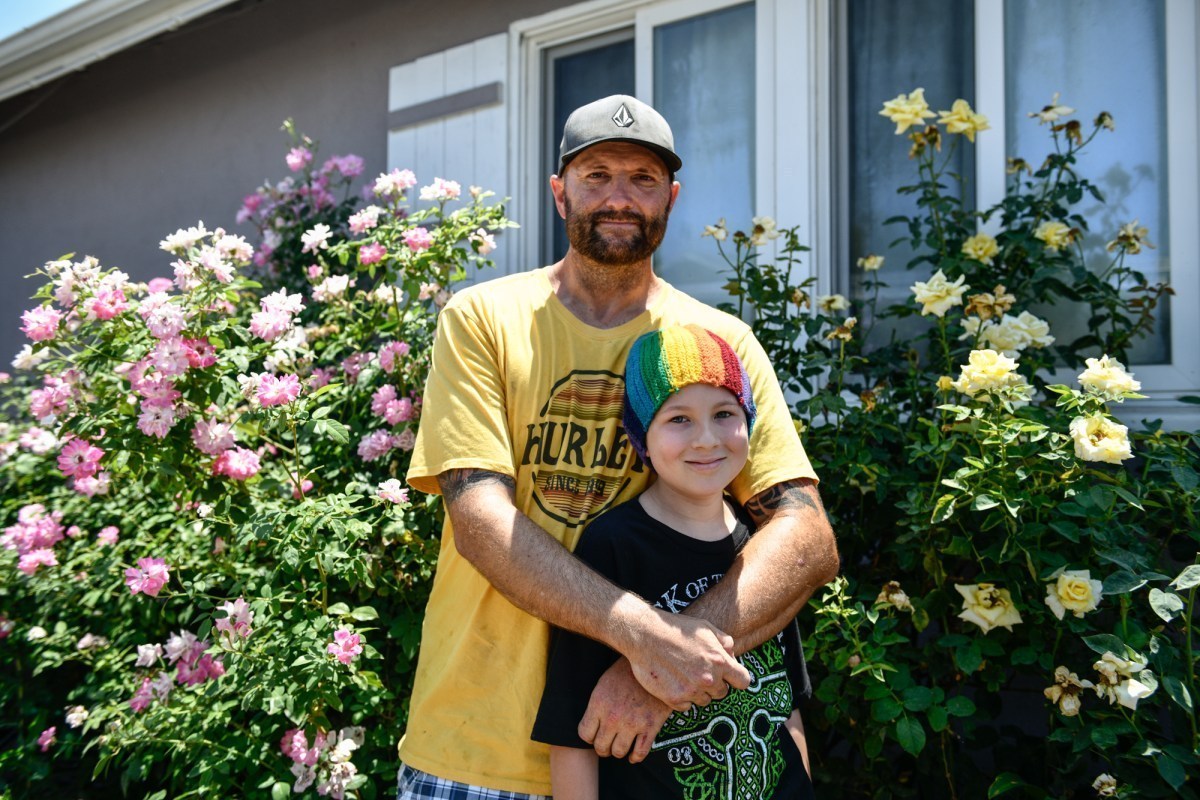 Two years ago the Los Angeles Department of Water and Power shut off electricity at Will Hollman’s home in the San Fernando Valley, forcing the family to rely on a gasoline generator. In late June of this year, the department disconnected the water, too — despite a statewide moratorium on water shutoffs that Gov. Gavin Newsom recently extended through Sept. 30.

Hollman, his 10-year-old son and his 16-year-old stepdaughter endured 11 days of temperatures in the high 90s to low 100s without water or power. For 11 days, they camped out in air-conditioned grocery stores, Starbucks or his truck. They couchsurfed and used friends’ showers. Hollman played it off with the kids as some kind of fun obstacle course.

He called the department’s customer service, and said a representative told him that he must pay off his utility debt of $9,064.13 — largely consisting of charges that Hollman disputes as erroneous — before water or power could be restored.

“It’s been demoralizing, humiliating,” Hollman said on the eighth day. “I have a history of paying my bills, working, being a good provider. You… start having feelings of failure as a parent.”

Those 11 days without water or power are a window into what could happen to millions of Californians in the coming months and years, depending on how swiftly and effectively the state distributes relief.

Official estimates of unpaid water and energy bills accumulated during the pandemic verge on $2.7 billion, affecting a few million Californians — and those figures have been growing rapidly.

The state has so far prioritized rent relief — keeping people housed — over utilities relief. A spokesperson for the state’s COVID-19 Rent Relief program said that of the $158 million distributed as of July 16, less than $40,000 had gone to utilities relief. Utility debt makes up about 6% of all assistance requested so far.

On July 11, lawmakers revealed a plan to use one-time federal relief money to address the debt. The deal is a patchwork of new programs to forgive $2 billion of utilities debt and old programs to help households chip away at the rest, with a wide range of eligibility criteria and timelines. But it doesn’t extend current shutoff moratoria past Sept. 30.

“We’re laser-focused on getting this assistance out the door as quickly as possible,” Newsom said in a statement about ongoing rent relief and the utilities relief plan. He has signed the energy bills relief into law, while the water bills relief still awaits his signature.

This will be an important “reboot” to protect Californians and utility companies, said Ellen Hanak, director of the Water Policy Center at the Public Policy Institute of California.

“You don’t want people to be shut off from basic services,” Hanak said, “But it’s also a hit to the entire community if utilities aren’t able to balance their books, because that can have all sorts of ripple effects on the abilities of water and electrical systems to run well.”

“For public health and safety, it’s important for people to have roofs over their heads, clean water and power. Those are all pieces of the puzzle,” Hanak said.

A Catch-22 at LA’s utilities department?

After opening an account in 2017, he began receiving unusually high electricity charges topping $1,000 — even during months when no one was living in the house because he was staying with his parents — which Hollman attributes to billing errors by the LA utility.

Under financial stress following a messy separation, Hollman said he let the bills pile up.

By early 2019, his unpaid balance had mounted to nearly $9,000. He applied for $2,000 of assistance from the Los Angeles County Department of Public Social Services to keep service on. But the water agency insisted on full payment of his bill, according to correspondence from his social worker reviewed by CalMatters. In March of 2019, the department shut off his power due to non-payment. He bought a generator.

Following the power shutoff, the electricity charges continued, labeled as “unmetered estimated consumption” in bills reviewed by CalMatters, meaning the utility generated them without checking Hollman’s meter. In December 2019, a customer service representative credited his account with several thousand dollars, but, according to Hollman, told him that the department couldn’t stop the continuing energy charges or issue more credits until a technician read his meter.

Which required that the power be turned back on.

Which couldn’t happen until he paid off the debt.

As Hollman tells it, he was caught in a Catch-22.

In April 2020, amid the first pandemic surge, the LA utilities department closed Hollman’s account with an unpaid balance of $9,064.13, meaning that he couldn’t open a new account until he paid off the debt, which could affect his credit score or be taken to small claims court. But, Hollman said, a representative promised that water would stay on while the pandemic lasted. For over a year, it did — until a technician arrived unannounced in late June.

The LA utilities department tells a somewhat different story. In a statement, a department spokesperson said that it had disconnected Hollman’s water in October 2017 and power in March 2019 because Hollman had made no payments since opening his account in March 2017. The spokesperson said the department turned off his water twice more after detecting unauthorized use, in April 2019 and again this past June, when it “came to light to LADWP… that water service had illegally been turned back on.”

While declining to comment on the high “unmetered estimated consumption” charges or Hollman’s apparent Catch-22, the spokesperson said the department restored water service in early July “in an attempt to work out a payment plan… for the water and power that was consumed since 2017.”

Hollman disputes that he illegally reconnected the water, saying it never stopped flowing and that he never received notices it would be shut off. He said that a water department representative told him last week that he had to pay a third of his outstanding bill — money that he said he doesn’t have — before he can qualify for a payment plan.

Mounting debt, and shutoffs despite protections

Hollman is not alone. Despite shutoff protections, the California State Water Resources Control Board has received 308 reports of water disconnections during the pandemic. No agency tracks power shutoffs.

A spokesperson said the state water board got water restored in each case, including for Hollman.

In February, the state water board estimated that 1.6 million households were late on water bills that totalled over $1 billion across California, and were growing quickly. The California Municipal Utilities Association estimated unpaid energy bills at publicly owned utilities topped $300 million, while close to 4 million customers of investor-owned utilities were behind on energy bills, totaling $1.4 billion, as of late June, according to a California Public Utilities Commission spokesperson.

Many people don’t know that they are still protected from shutoffs. Some no longer are.

When the state reopened in mid-June, Newsom quietly extended the moratorium on water shutoffs to Sept. 30. One water system has already said that it will resume shutoffs the next day.

The California Public Utilities Commission also extended the power shutoff moratorium to Sept. 30, days before it was set to expire on June 30. But that only applies to customers of investor-owned utilities, leaving the quarter of Californians served by publicly owned utilities vulnerable, said Mad Stano, an energy equity attorney at the Greenlining Institute, a racial justice nonprofit.

LA’s water department is the largest publicly owned utility in the United States. During the pandemic, customers’ unpaid bills there increased more than 10-fold, from $37 million accrued during 2019 to $400 million accrued during the first eight months of the pandemic, according to a state Water Board report. More than one in five customers behind on bills had debt over $1,000. The department has voluntarily chosen to extend its own moratorium on shutoffs for nonpayment, according to a spokesperson, but has not yet announced an end date. It has also not publicized that decision.

Her utilities bill ballooned to $19,308.45 during the pandemic as her South Los Angeles household grew to include 12 children, grandchildren and friends.

Bell-Holt assumed that disconnections would start June 30, when evictions were set to begin had lawmakers not made a last-minute deal. She scrambled to send the department $500 in late May and $200 on June 25th, hoping a few payments would stave off shutoffs. To afford that, she said she took out a $500 loan with 347% interest, which she’s still paying back.

Bell-Holt said that if she’d known she wasn’t at risk on June 30, “I wouldn’t put us in a hole like that.”

The state and utilities haven’t done enough to inform Californians about protections, Stano contends. “The state needs to require… communications to people so they don’t make financial decisions that they don’t have to make,” they said.

Living without water or power

On Hollman’s third day this summer without water or power, it hit 100 degrees outside. Inside the house was even hotter.

Hollman and his kids are used to life without air conditioning in one of California’s hottest regions. Their generator — which requires $10 of fuel per day, on average — only powers the lights, electronics and refrigerator. Normally, Hollman might cool the house by hosing down the roof and outdoor plants.

Instead, the family lingered at McDonald’s. “It becomes very difficult to keep your spirit up, but you have to for your kids,” Hollman said. “You can’t crack.”

On the fifth day, his son thanked Hollman for the best day ever, after the two spent the afternoon cutting through the heat on skateboards.

On the ninth morning, Hollman ran out of generator fuel. He reminded his kids not to open the refrigerator, so the food wouldn’t spoil. He knew his car’s radiator was low, but he was out of coolant and bottled water. He crossed his fingers that the old truck wouldn’t overheat on the way to the gas station. It did.

“It’s a dance that people shouldn’t have to f—ing do,” Hollman said.

Relief on the way for California utility bills

In May, Newsom proposed $2 billion to relieve utilities debt. Legislators agreed to the price tag in June, but continued negotiating the distribution plan in private.

The result is two budget bills that would create new programs that pay utilities directly to forgive customer debt accrued during the pandemic, prioritizing those at greatest risk of shutoffs. The California Arrearage Payment Program would forgive $994 million in energy debt, while the California Water and Wastewater Arrearage Payment Program would forgive $985 million.

In both cases, utilities must opt in. They must also offer all customers with pandemic debt a payment plan that would protect them from shutoffs as long as they enroll and stay current on the plan. Plus, the first forbids energy utilities from disconnecting power to a customer for 90 days after applying forgiveness to their account. Neither bill extends the shutoff moratoria, though the Public Utilities Commission has extended a moratorium on shutoffs for a segment of water utilities, which cover about 16% of customers.

The pending legislation also funnels an unspecified amount of federal relief money into two existing programs for which households must be income-eligible and apply for the assistance.

It’s unclear whether Hollman will be eligible for the programs, given that he accrued his debt before the COVID-19 pandemic. He may be at risk of another water shutoff soon.

A repeat of rent relief troubles?

The state has created countless new assistance programs during the pandemic — many mired by delays, bureaucracy and scandals.

The state’s COVID rent relief program is one example. As CalMatters reported, lengthy online applications available in too few languages initially blocked access to vulnerable renters, while distribution has been painfully slow.