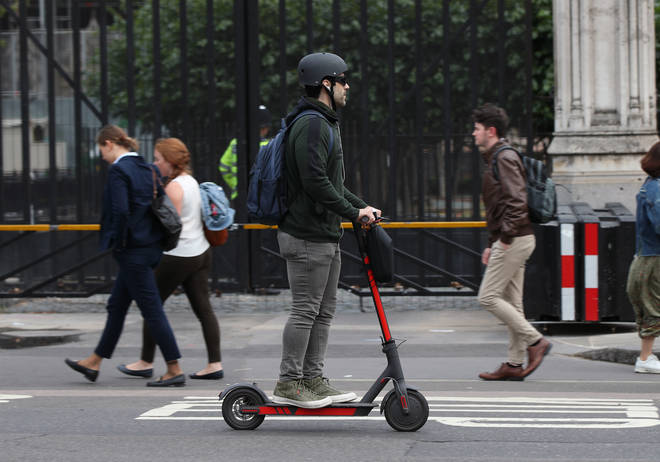 The British government is opening a public consultation into the use of electric scooters in what is likely to be the first step toward legalizing them in the country. The consultation, news of which leaked in January, is an attempt to work out what rules should be placed on scooter riders and manufacturers to make sure they’re safe on the UK’s roads.

It’s been announced as part of a broader review into transport in the country, which transport secretary Grant Shapps called “the biggest review of transport laws in a generation.”

Despite their increasing popularity around the world, electric scooters have remained essentially illegal in the UK because of the country’s preexisting laws. These laws categorize electric scooters as motor vehicles, but because scooters can’t pass the same safety and legal regulations as cars they’re illegal to use on public roads. Since they’re motorized, they’re also illegal to use on the sidewalk under the 1835 Highway Act.“THE BIGGEST REVIEW OF TRANSPORT LAWS IN A GENERATION”

The consultation is an attempt by the government to work out the kinds of regulations that should be applied to electric scooters and their riders, which have caused injuries in places where they’re legal. The government wants to establish minimum vehicle requirements, and is also considering whether to require riders to wear helmets, have insurance, or carry a license. There are also questions about whether scooters should be allowed to be ridden in cycle lanes or on pavements.

The current situation means that most major electric scooter rental companies have been excluded from the UK. Bird has been a notable exception. For the past year and a half, the Santa Monica-based company has been running a trial of its electric scooters in London’s Olympic Park, which is legal because the park is technically private property.

However, despite their illegality, electric scooters have become an increasingly common site on British roads, and the first person died in an electric scooter crash last July, The Guardian reports. Anyone currently riding an electric scooter on the road risks facing a £300 fine and six points on their driver’s license.DESPITE THEIR POPULARITY, ELECTRIC SCOOTERS ARE CURRENTLY ILLEGAL IN THE UK

Now, individuals and companies will be able to give their input on how they’d like to see scooters legalized. Companies we’ve spoken to in the past have said they’d be in favor of minimum safety requirements. Speaking to The Verge last November, Lime’s UK head of policy Alan Clarke said that the company would like to see a top speed of 15.5 mph in place for electric scooters, and requirements put in place for all scooters to have both front and rear brakes, suspension, lights, and reflectors for visibility. Although it offers electric scooter rentals elsewhere, Lime currently serves the UK market with electric bikes.

Although the announcement of the consultation is a step toward legalization, it will still be some time before electric scooters can legally be ridden on any public road. The consultation is due to run until May 22nd, after which the government wants to conduct small-scale trials in its “Future Transport Zones.” However, even this trial can’t take place until the country’s existing legislation is amended, meaning they’re unlikely to start until late 2020.

In total, the government has announced four of these transport zones, where it hopes to trial the new transport tech. One is in Portsmouth and Southampton, which covers the two cities as well as Winchester and parts of the Isle of Wight. The second is in Derby and Nottingham, which covers the two cities and the area in between. Third is the West of England Combined Authority, which has four areas across Bath, Bristol, the Northern Arc, and Bristol Airport. The West Midlands is the fourth zone.

Electric scooter trials are just one part of the Future of Transport Regulatory Review, which will include a number of other initiatives, such as allowing buses to work more like on-demand ride-hailing services. It also plans to trial using e-cargo bikes for last-mile deliveries and drones for medical deliveries.