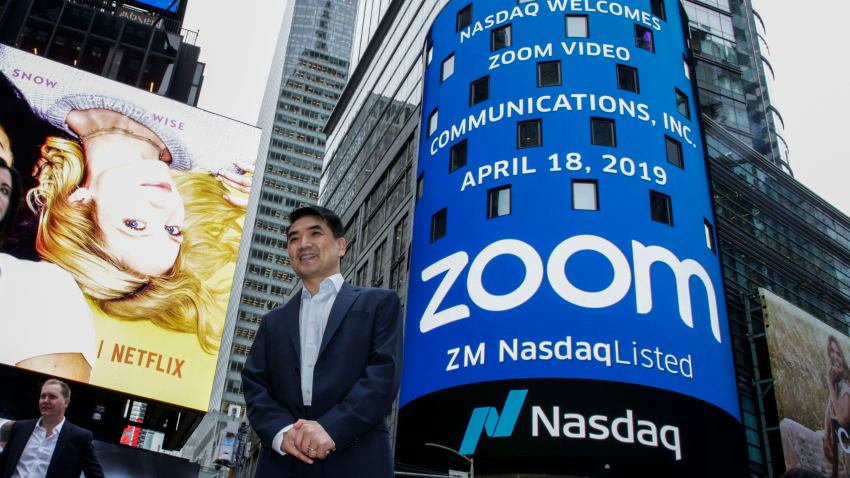 Zoom is poised to show another monster quarter when it reports results on Monday, with sales growth expected to top 300% for a second straight period.

But investors of late have been looking past this earnings report, as well as the one after that and even the one after that. It’s the back half of 2021 that becomes challenging for Zoom because the company will then have to contend with comparisons to the wild growth periods of the pandemic and surge in remote work.

Additionally, a Covid-19 vaccine appears to be on the horizon for 2021. Both Pfizer-BioNTech and Moderna reported preliminary results showing that their respective Covid vaccines were around 95% effective, while the Oxford-AstraZeneca vaccine had an average efficacy of 70%.

It’s not clear what happens to Zoom’s business when people start returning to the office, but the company’s stock has sold off on positive vaccine news.

On Nov. 9, after Pfizer first said its vaccine candidate showed a 90% efficacy rate, Zoom shares plunged 17%. The stock has recouped some of those losses, but it’s still 24% off its high from last month.

It’s an understandable retreat, considering that Zoom is up almost seven-fold this year, reflecting the company’s graduation from a fast-growing but niche cloud software application to a household tech staple that’s used by office workers, students and for virtual meetups.

Millions of families across the country had to resort to video chat for their Thanksgiving celebrations last week, whether on Zoom, Google Meet, Microsoft Teams or Apple’s FaceTime. They’ll likely do the same through the winter holiday season.

For the third quarter, which ended in October, Zoom is expected to show revenue growth of 317% to $694 million, according to analysts polled by Refinitiv. That follows growth of 355% in the fiscal second quarter and 169% in the period ended April.

In the current quarter, which ends in January, Zoom’s growth is projected to stay at a robust 288%, followed by 116% in the next period. Then things start to slow dramatically — into the teens — based on analyst estimates.

Earlier this month, research firm Elazar Advisors lowered its rating on Zoom to “buy” from “strong buy.” Chaim Siegel, an analyst at Elazar, said that to keep a “strong buy,” the firm needs to see 45% upside to the stock over the next 12 months as well as an “honest wow” ahead.

“[Zoom] had that wow, no doubt,” Siegel wrote. “But there’s going to be perceptual headwinds with Pfizer’s vaccine.”

A Zoom spokesperson said the company doesn’t comment on financial matters during its quiet period.

The reality for Zoom is that it’s hard to live up to investor expectations after such a historic rally. Even with its price-to-sales ratio being cut in half from its peak earlier in the pandemic, the stock is still trading for 98 times revenue and about 42 times sales for next fiscal year.

Shareholders will be listening closely for commentary from company executives on what the potential pipeline looks like when people are again working from the office. The company also faces increased competition from Microsoft and Google, which have bolstered their video-conferencing products in recent months and have gotten aggressive on pricing.

Still, some investors view any pullback as a buying opportunity given the quality of Zoom’s products and the likelihood that some version of remote work is here to stay.

“We continue to see Zoom as benefiting even in a post-COVID-19 scenario, as its video conferencing solution has become a critical component of how companies communicate during COVID-19,” wrote Siti Panigrahi, an analyst at Mizuho Securities who recommends buying the stock, in a report on Nov. 9. “The pandemic has also increased the recognition of its long-term importance in the new normal, post- pandemic workplace that will emerge over the coming years.”