Despite encouraging signs, coronavirus is ‘advancing’ worldwide, WHO envoy warns 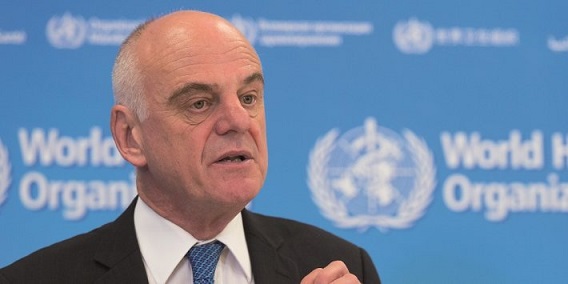 WASHINGTON — A top envoy of the World Health Organization warned Sunday that the coronavirus will be a “virus that stalks the human race for quite a long time” until a vaccine is developed.

In an interview on “Meet the Press,” Dr. David Nabarro, a special envoy of the WHO, said there are signs that the rate of new infections could be starting to slow in the U.S. and Europe thanks in part to “very rapid” mitigation.

But he added that the virus is still “advancing in other parts of world” and that communities around the globe will need to develop an infrastructure and capacity to defend against sporadic outbreaks in the coming months before lifting restrictions and trying to return life to a sense of normalcy.

“We are not so sure it will come in waves in the way that influenza does. We think it’s going to be a virus that stalks the human race for a quite a long time to come, until we can all have a vaccine that will protect us,” he said.

“The key for this particular virus is that every community has a kind of defensive shield, can pick up cases as soon as they appear, isolate them and stop outbreaks from developing. It’s going to be necessary for every single country to have that capacity.”

There were more than 1.8 million confirmed cases of COVID-19 in the world by Sunday night, with 555,000 of those cases in the U.S., according to Johns Hopkins University’s Coronavirus Resource Center. Almost 22,000 people had died in the U.S. from the virus, according to NBC News reporting.

When it comes to the debate over when to lift some of the restrictions keeping Americans inside, Stephen Hahn, commissioner of the Food and Drug Administration, said on “Meet the Press” that the White House coronavirus task force is focusing foremost on the “safety and the welfare of the American people.”

“Everybody wants to get back to work. I’ve been hearing that from friends and colleagues around the country. Certainly, there are urgent economic reasons for that,” he said.

“However, I think the task force, the president, the vice president, all the doctors on the task force are really looking at this from a balanced approach. The primary issue here is the safety and the welfare of the American people. That has to come first.”

While the WHO represents the world’s unified effort in combating the virus, President Donald Trump has raised concerns about the agency, particularly its relationship with China, where the virus first began spreading.

During a news briefing last week, Trump said of the WHO that “they seem to be very China-centric” and that “we will look at ending funding” by the U.S.

Other Republicans have shared similar concerns. Sen. Rick Scott of Florida said in a statement late last month that the organization needs to be “held accountable for their role in promoting misinformation and helping Communist China cover up a global pandemic.”

Responding to the criticism, Nabarro said that the WHO has “had the best information coming to us that can come under the current circumstances” and that China invited a WHO investigative team for an inspection in mid-February without any restrictions.

Nabarro added that while there may be some “examinations afterwards” into whether the organization could have done something differently, the world needs to move forward united.

“We’re right in the middle of this massive, epic struggle,” he said. “Every single human being in the world is affected by it — businesses are really in trouble, communities are in distress. I really do hope that all nations will not find any reason to make threats or other such things that will undermine our capacity to bring together all the best knowledge that we can find.”