For nearly a month, Italy held the awful distinction of having the most coronavirus deaths of any country in the world — topping China, the original epicenter, in mid-March, and being overtaken by the United States three and a half weeks later.But now doctors are hoping to turn Italy’s terrible suffering to its advantage.The country is pinning its hopes on using the blood plasma of Covid-19 survivors to help those who are suffering most from it in hospitals now.“Good can come out of this,” said Dr. Fausto Baldanti. “We had such a huge outbreak, [that] now we have many potential donors.”People who recover from an infection, or who tested positive but never experienced symptoms, develop antibodies in their blood plasma. Those antibodies can be transfused into another victim, where they might help to neutralize the virus in the recipient’s body.For decades, doctors have used plasma or even whole blood from recovered patients to treat the newly infected.Baldanti is a virologist at the University of Pavia San Matteo Hospital in Italy’s northern Lombardy region, which has seen the most cases and deaths in the country. He hopes “this plasma treatment can be crucial for controlling the infection in patients admitted to intensive care units.” 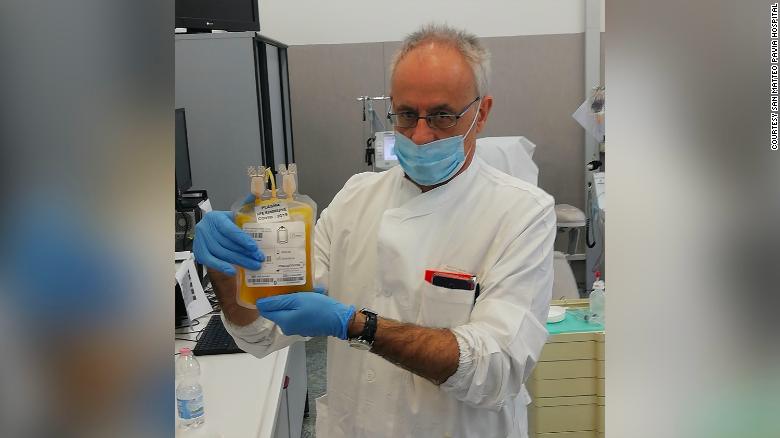 Doctor Cesare Perotti, director of the immunotransfusion service at the University of Pavia San Matteo Hospital, holds a bag of plasma after a donation.That’s the theory, anyway — but the treatment is still in the experimental phase in Italy.It depends on the development of a proven test for coronavirus antibodies — which is not yet available. (In the United States, the Food and Drug Administration just tightened restrictions on antibody tests after an earlier relaxing of the rules led to a flood of low-quality tests.)Antibody tests, also known as serology tests, don’t diagnose active infection with the coronavirus. Rather, they check for proteins in the immune system — antibodies — through a blood sample.The presence of antibodies may mean a person has at least some immunity — although experts are not sure how strong the immunity may be or how long it will last.The director general of the Italian National Blood Center hopes to have a test ready within weeks.“We should have a serological exam (blood test) that is approved to test if someone has antibodies by the end of April. We will start selecting the first donors by the end of the month,” Giancarlo Maria Liumbruno told CNN.“This new initiative would allow us to go through our 1,700,000 blood donors in Italy, to see who has been infected or is asymptomatic and has developed antibodies,” he said.He recovered from the coronavirus and now his plasma donation could save the lives of othersOnce an antibody test is approved, Italy plans to open its blood banks to donations from people with coronavirus antibodies, Liumbruno said.The test would allow scientists to select the most effective blood donors, San Matteo hospital virologist Baldanti explained: “So, who has the highest activity of the virus? You use that plasma to infuse into the sick patients.”The project aims to recruit repeat voluntary plasma donors with antibodies, Liumbruno said.In northern Italy, trials have already begun at some hospitals of treating patients with plasma from an individual who has recovered from the virus and has tested negative for it for at least 14 days.The plasma is separated from blood cells in a process called plasmapheresis and intravenously given to a Covid-19 patient.Plasma could also be the key to creating an effective drug therapy, according to Liumbruno.Hospitals from the hard-hit northern region are working with Kedrion Biopharma, a global biotech company with production facilities in Italy and the United States.It is one of four companies authorized by Italy’s National Health Service to fractionate plasma from blood banks.It is working on a plasma-derived treatment for Covid-19 and expects it to be ready in three to six months, according to its Chief Medical Officer, Dr. Alessandro Gringeri.“Initially we will use plasma from about 100 patients who have recovered from Covid-19 in order to develop a dosage that can be injected through either intravenous or intramuscular means,” Gringeri said. “We will generate a plasma-derived immunoglobulin therapy that can be administered to either patients who are suffering from Covid-19 or health care workers to provide temporary passive immunization.”Gringeri says the company plans to start collecting plasma from convalescent patients by the end of May, with a hope of having a prototype of the treatment by the end of September.If the theory proves successful in practice, Italy’s tragedy may at least turn out to contain the seeds of a solution.