Potato Milk, A New Plant-Based Dairy, That Could Be The Most Sustainable Option 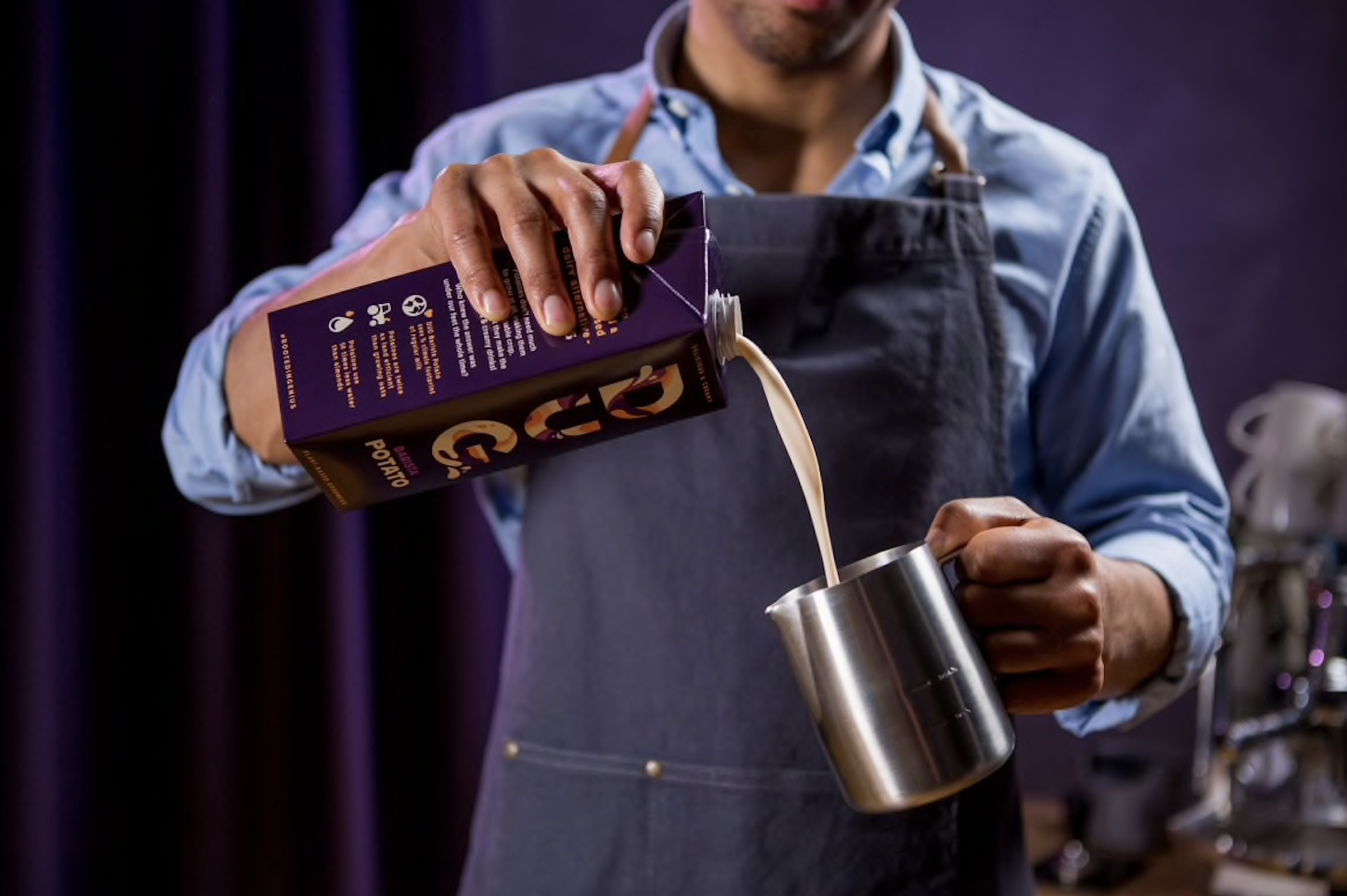 Non-dairy milks made from oats, almonds and soybeans have become commonplace in grocery stores and coffee shops, but this fall, a new competitor is making its way to select cafés: potato milk.

The product was developed by Eva Tornberg, a professor with the department of food technology, engineering and nutrition at Lund University in Sweden. She says she saw an opportunity to create sustainable milk with potatoes because they contain high-quality proteins that are transformed into milk by adding rapeseed oil, chicory fibre and pea protein.

“Potatoes saved people from starving during the 19th century,” said Tornberg, who is also head of innovation and development at Veg of Lund, the Swedish company behind potato milk, which is marketed as Dug. “It has everything: good protein, high starch content and high vitamin C content.”

Potato milk is currently only available in Sweden, U.K. and China, but Tornberg said it’s been a hit among consumers, and they’ve nearly run out of stock. She credits the milk’s success to its creamy texture and rather neutral taste.

Potato milk might also be the most environmentally friendly milk option. Tornberg’s research revealed it takes 56 times less water to grow potatoes than it does to produce almonds.

The potato is one of the most productive and easy-to-grow foods in the world. Potatoes are very water- and land-efficient, meaning they produce more food per square metre and use less water than many other plants.

But how sustainable is it? Let’s compare it to other milks.

Tornberg said it requires 16,000 litres of water to produce a kilogram of almonds, compared to 270 litres for a kilo of potatoes. And about 80 per cent of the world’s almonds are grown in California, which is experiencing a record-breaking drought.

“Almonds are grown in Mediterranean[-type] climates, where there is a lot of sun and not a lot of water,” said Alissa Kendall, professor of civil environmental engineering at University of California, Davis. “Almonds take a lot of water to grow and that water is often irrigated instead of rain-fed water. You end up using groundwater or surface water to grow the food.”

Soy milk performs better in terms of water use, averaging around 2,500 litres of water per kilogram of soybeans, but studies have found that soy milk is the worst plant-based milk in terms of greenhouse gas emissions. That’s largely because of the clear-cutting that can occur to make space to grow soy, which ends up releasing more carbon.

Kendall, who studies the environmental impacts of agricultural systems, said it really depends on where the soy is being grown.

“Soy grows all around the world and is then turned into soy milk, so some of the really high numbers are generated from studies in Europe that assume that the soy is grown in Brazil and and has some responsibility for deforestation,” said Kendall.

Soy milk can be more sustainable when grown in other parts of the world, she said, especially when it’s grown closer to where you, the consumer, live.

Oat and potato milk have comparable carbon and water footprints, but according to Tornberg, growing potatoes is twice as efficient as growing oats in terms of land use.

“Potatoes are more productive than other plant bases that are used in milk.”

Despite some of their shortcomings, Kendall said all plant-based milks perform better than dairy milk in terms of water use, carbon footprint and land use.

“With dairy, you have to feed cows a lot of feed, and on top of that, they generate methane while they metabolize all that feed and produce milk, so their carbon footprint is huge,” she said.

Not only that, but she said growing cattle feed requires a lot of water and dairy processing is an energy-intensive process.

Choosing the most sustainable milk

While potato milk seems like a strong, sustainable option, Kendall cautions that where and how your vegan milk is packaged can have a bigger impact on the environment than its production.

“These plant-based milks are actually mostly water, meaning that there’s not much of the plant in the milk,” said Kendall. “So just like any product where most of the product is water, things like shipping and packaging are actually pretty important to think about.”

Kendall recommends people check labels to see where plant-based milks are packaged. Some companies package the milk closer to where it is sold, which saves shipping and is thus better for the environment.