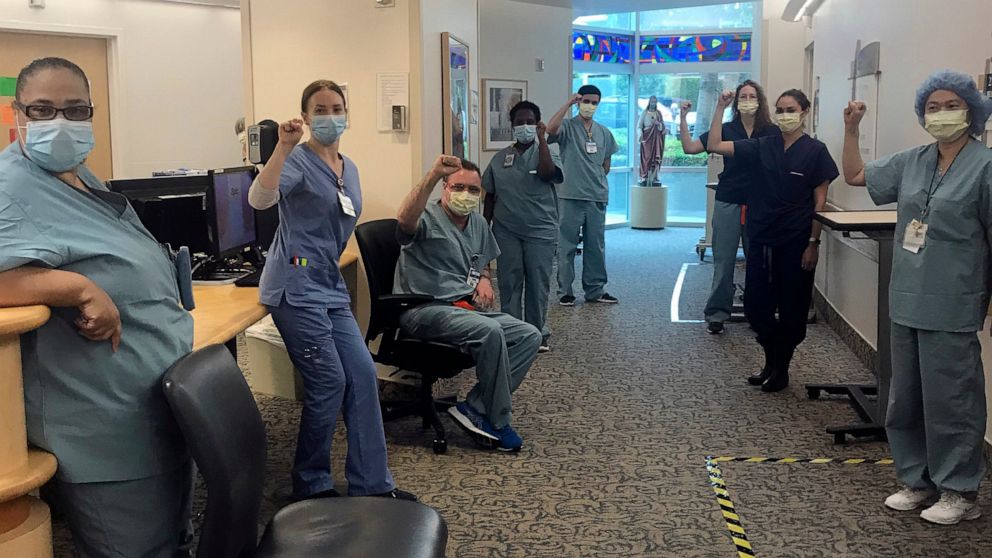 Ten nurses in a California hospital were suspended after saying they would not work in the coronavirus ward if they were not given protection including N95 masks, The Associated Press and the Los Angeles Times reported.

It came after they demanded more protective equipment after learning that a coworker had tested positive for the virus.

Seven more nurses were suspended after making other demands over the weekend, a source told the LA Times.

National Nurses United, a body which represents the nurses, said that the 10 nurses have been suspended, The Associated Press reported.

The union said that they are now allowed to return to work until there has been an investigation from human resources, but that they are still being paid.

Mike Gulick, one of the nurses who demanded the equipment on Friday, was determined not to bring the virus to his wife and two-year-old daughter.

He would stop at a hotel to shower before going home after his shifts, the AP reported.

He told the AP: “I went into nursing with a passion for helping those who are most vulnerable and being an advocate for those who couldn’t have a voice for themselves, but not under the conditions we’re currently under.”

And Jack Cline, another suspended nurse, told the LA Times: “We told them we’re willing to reuse the same mask all day long and cover it up with a surgical mask, just issue us one mask a shift.”

“That’s all what we’re asking for.”

The CDC has not required that medical staff use N95 masks, and says that medical workers can work with regular surgical masks when treating coronavirus patients. But health care workers have been critical of the policy.

“When I have a patient coughing directly in my face … I’m not going into that room unless they provide me with one.”

“They’re saying I’m refusing my assignment, I’m not … It’s not that I’m afraid to go in there, I’m afraid because I don’t have the equipment.”

Medical staff around the country have worked without masks amid a national shortage during the outbreak, or have re-used masks when dealing with more than one patient. The Food and Drug Administration says that N95 respirator masks “should not be shared or reused.”

Angela Gatdula, another nurse at the hospital,  tested positive for the virus, and said she thinks she contracted it after treating coronavirus patients. She said the hospital told her that wearing a surgical mask, and not an N95 mask, would be enough.

“They could’ve done more,” she told the LA Times. “I don’t want it to be one of our nurses who ends up needing hospitalization, needing ICU admission, possibly even dying.”

The Providence St. John’s Medical Center told the LA Times that it could not comment on suspensions due to privacy laws.

In a more general statement, it said “We are so grateful for the heroic work our nurses perform each day and will not let the actions of a few diminish the appreciation we have for all our nurses and their commitment to our community. … Saint John’s cherishes its nurses and is taking precautions sanctioned by leading world, national, state and local health agencies to ensure their safety.”

It also declined to say how many workers in the hospital have tested positive for the virus, again citing privacy laws.

The hospital would also not elaborate on shortages to the AP, but said that, as of Tuesday, it was giving N95 masks to all nurses who work with coronavirus patients and are waiting to see if they have tested positive. It also said it was disinfecting masks daily.

“It’s no secret there is a national shortage,” the statement said.

Nursing unions across the US have protested or have organized protests over the shortage of personal protective equipment like masks.

Dr. Frank Gabrin, the first emergency room doctor to die of the coronavirus had told his friend before his death in March that he got infected after he had to wear the same mask four days in a row.