A Salute To WWII Veterans Of The Greatest Generation 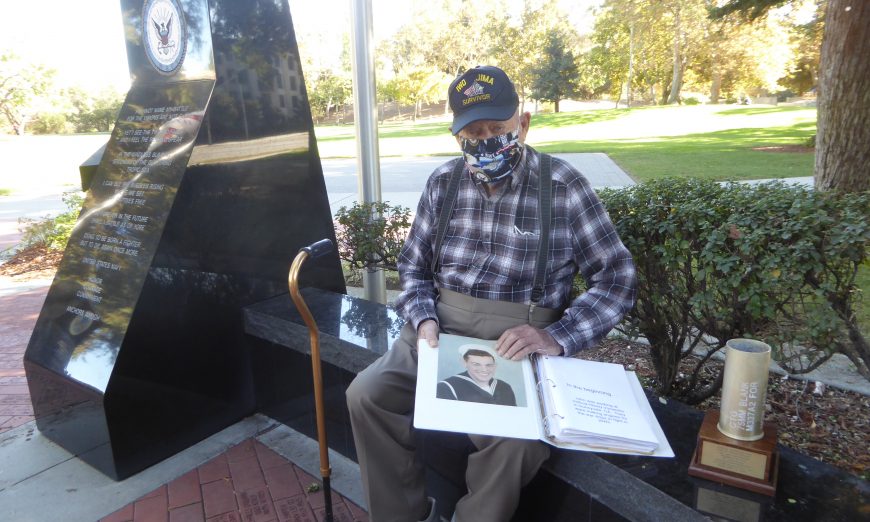 When the U.S. Marines planted the American flag atop Mount Suribachi on the Japanese island of Iwo Jima on Feb. 23, 1945, John G. Darouze, a 19-year-old LCM Coxswain in the U.S. Navy, witnessed it — both times.

“They had to do it again,” said the 94-year-old Santa Clara native, revealing a little-known fact. (The first flag was too small.)

Darouze, who served in WWII from 1944 to 1946, has been recognized by the military as one of the longest-serving Navy personnel at Iwo Jima.

For nine months, he piloted an LCM (landing craft mechanized), ferrying Marines between ships and the island. He delivered the wounded to hospital ships and pulled downed airmen from the Pacific.

“Few men stayed on the island that long,” he pointed out while visiting the Santa Clara Veterans Memorial in Central Park the week before Veterans Day, Nov. 11.

He reminisced, sharing his Navy album. It included copies of Japanese surrender documents, faded photos of the island and multi-colored ribbons he had been awarded for outstanding heroism.

On Feb. 15 at Camp Pendleton, CA, Darouze was one of 28 honored at the 75th anniversary reunion of survivors of the 36-day Battle of Iwo Jima.

It is considered one of the bloodiest battles in Marine Corps history. Nearly 7,000 Americans were killed and 20,000 wounded. An estimated 18,000 Japanese were killed.

As soon as he got his wings, Robinson was commissioned to be a flight instructor at the Pecos Army Air Field in Texas. He trained men to fly in a canvas-covered, five-seat, Cessna UC-78.

After military retirement, the California native and former Sunnyvale resident continued flying. He trained civilian pilots until he was 91, grounded by macular degeneration.

“Heads of our government should do enough things to keep us out of future wars,” commented Robinson, who also had a 25-year career with Lockheed Martin.

“Show respect to all veterans. The Vietnam War veterans were not even welcomed home when they came home,” he reminded.

“If you know a veteran, just say ‘Welcome Home.’ Veterans of any conflict will understand.”

“Fly your flag proudly, and if it is tattered get a new one,” said Jacob. Drop the old one at Post 419, and we will correctly dispose of it on Flag Day in June.”

At the Veterans Memorial in Santa Clara, Mayor Lisa Gillmor and other dignitaries pay tribute to veterans in a YouTube video viewable via the City’s Facebook page and other social media.