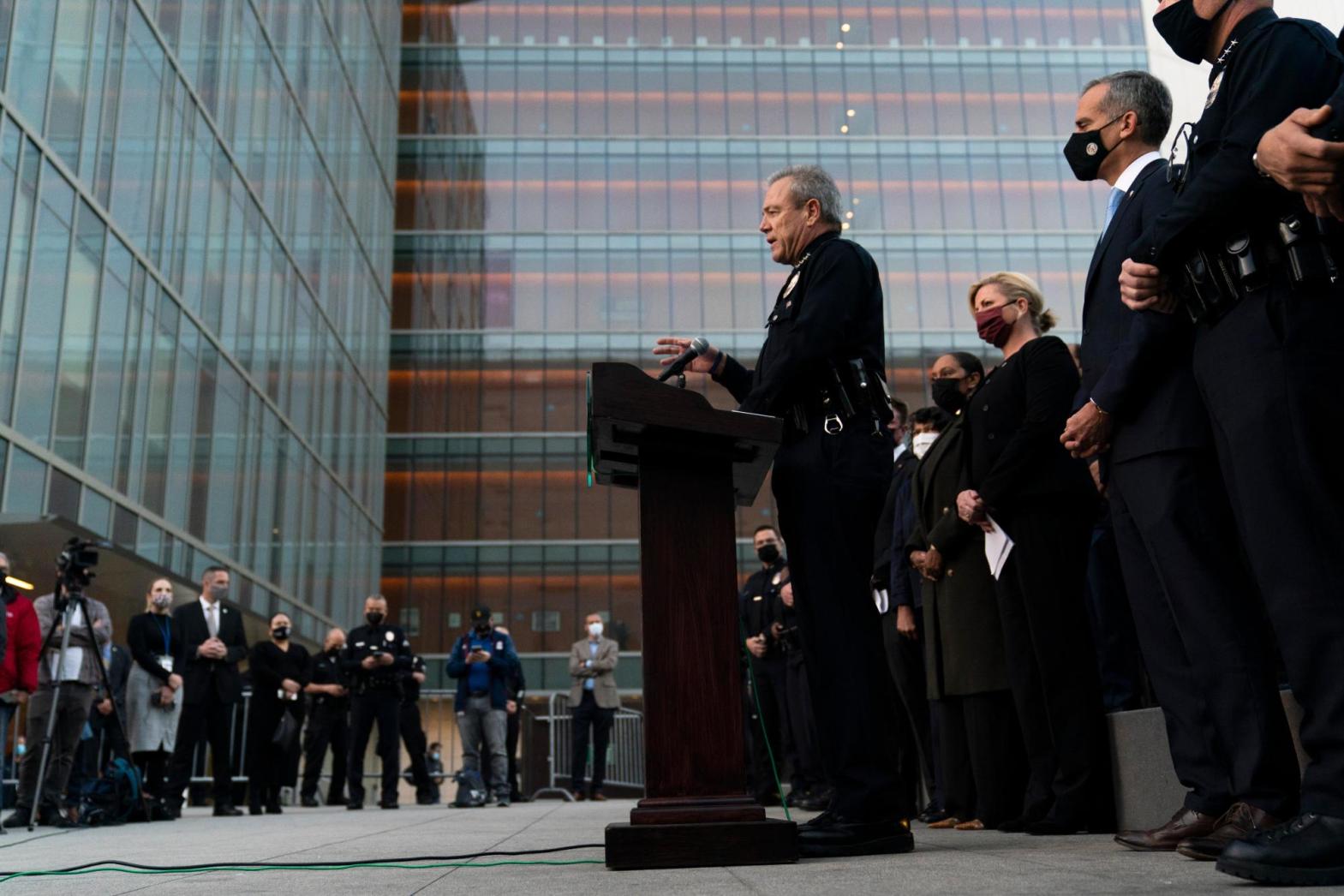 Authorities in Los Angeles on Thursday announced more than a dozen arrests in recent smash-and-grab thefts at stores where nearly $340,000 worth of merchandise was stolen, part of a rash of organized retail crime in California.

Fourteen people were arrested in connection with 11 brazen robberies between Nov. 18 and 28, and all are out of custody, police Chief Michel Moore said. Most bailed out or met no-bail criteria, and one is a juvenile, he said.

At a joint news conference, both Moore and Mayor Eric Garcetti called for an end to a no-bail policy for some defendants aimed at reducing overcrowding at Los Angeles County jails during the coronavirus pandemic.

Garcetti said with the pandemic easing, it’s time to make room again in lockups for criminals who commit violent acts and put store employees in danger.

“We need the help of our criminal justice system, of our judges, of our jailers,” Garcetti said. “We have opened up a lot of the city because we’re in a better place with COVID. We should be able to also open up our jails, and we should be able to have judges that put people behind those bars.”

A statewide policy of imposing $0 bail for misdemeanors and lower-level felonies ended last year, but it was kept in place within the LA County Superior Court system.

Moore said at least $338,000 in goods were stolen over ten days from stores and malls across the city that incurred $40,000 in property damage. Investigators are searching for multiple outstanding suspects, he said.

The incidents were part of a recent run of large-scale thefts in California and across the nation in which groups of individuals shoplift en masse from stores or smash and grab from display cases. Single operators have also been a growing problems for retailers who say the thieves face little consequence.

The chief said he was confident that police investigating the retail robberies had the support of Los Angeles District Attorney George Gascón, who ran on a reform agenda and supports ending bail across the board for misdemeanor, non-violent and non-serious felony offenses.

Gascón’s office said in a statement Thursday that those who commit smash-and-grab thefts will be held accountable.

“Our office has been collaborating with multiple law enforcement agencies and once all the evidence has been gathered, we will review the cases to determine what criminal charges should be filed,” Alex Bastian, special advisor to Gascón, said in the statement. “These brazen acts hurt all of us: retailers, employees and customers alike.”

In the Bay Area, the City Council in Walnut Creek this week approved an additional $2 million for policing after nearly 100 thieves wearing ski masks carried out a smash-and-grab mob robbery at a Nordstrom store in November. An estimated $125,000 in merchandise was stolen.

Gov. Gavin Newsom, a Democrat who has boasted of his criminal justice reform efforts, promised on Wednesday that the proposed budget he sends to state lawmakers next month will “significantly increase our efforts to go after these retail rings.”

Garcetti sought to calm the nerves of Angelenos hoping to shop at stores and malls for the holiday season, saying that the relatively small number of crimes is “no cause for alarm.”

“We’re acting fast to stop this in its tracks,” he said.