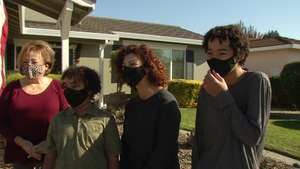 A South Bay grandmother’s simple request for assistance securing one of this season’s hottest toys for her two grandsons turned into the surprise of her life thanks to Dion Lim and 7 On Your Side consumer team producer Brinke Guthrie.

Roseann LaCoursiere had tried every big box store she could imagine, searching for the elusive XBOX X Series gaming system. The device, so rare, the console’s maker, Microsoft even announced supply shortages until at least April of 2021. So she emailed 7 On Your Side looking for guidance on how to get her hands on one in time for the holidays for her two grandsons, Winston and Sebastian, ages 12 and 13.

But these were not any ordinary kids.

According to their mom, Nicole LaCoursiere Wells, the brothers had lost their father to lung cancer about a year ago. He was a man who had never smoked a day in his life. This past wildfire season, their mom’s home burned to the ground in the CZU Lightning Complex fires. The family evacuated, not thinking it would be the last time they’d see their home. Soon, they would be without a home and that’s when they moved in with grandma in Santa Clara.

Teaming up with Dion once again – reaching out to their network of contacts within Microsoft, looking for answers. Weeks went by and the odds of learning how to obtain an XBOX X Series seemed slim. Until an email that popped up just days before Thanksgiving.