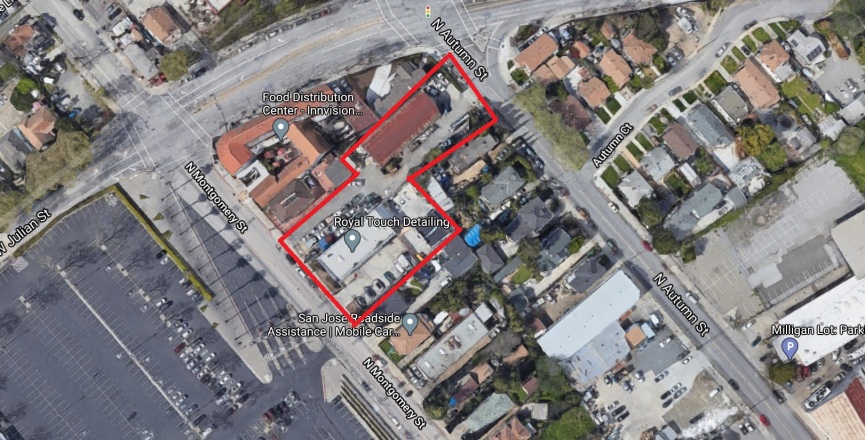 Google has given San Jose three downtown parcels at a prime site near the SAP Center where the city aims to build affordable homes.

The three parcels in downtown San Jose are contiguous and have frontages on North Montgomery Street and North Autumn Street and are across from the northern parking lots of the Shark Tank, documents filed on Oct. 18 with the Santa Clara County Recorder’s Office show.

The search giant gave the properties to San Jose without charging the municipality for the sale, according to the city and the county public records.

The parcels are next to the emerging footprint of Downtown West, Google’s proposed transit village that would consist of office buildings, homes, shops, restaurants, cultural hubs, entertainment centers and open spaces near the Diridon train station.

The tech titan decided to give the properties to the city ahead of schedule, according to Nanci Klein, San Jose’s director of economic development.

“Google is going to build 1,000 affordable homes for its project but the company is also providing these sites to further the development of affordable housing in San Jose,” Klein said.

Together, the three sites total 0.8 acres, which means up to 240 affordable homes could be built on the combined property.

Now that San Jose owns the properties, the next steps are for the city to sketch out a plan for the site and to choose a developer for an affordable homes project.

“There could be a mix of incomes that would be eligible for the housing,” Klein said. “Some of the units could deeply affordable. These are all things that have to be decided.”

During 2018, in multiple transactions over a span of seven months, Google bought the three properties on North Montgomery Street and North Autumn Street.

Google paid a combined total of $4.9 million in the purchases. All the properties are just south of West Julian Street.

Google could employ up to 20,000 people within the Downtown West neighborhood. Plus, more job-creating properties are being planned next to the transit village.

The proposed development agreement for the Downtown West neighborhood that Google filed with city officials in April included plans for 4,000 homes to be developed on Google-owned lands within the transit village’s footprint.

Of these 4,000 homes, 1,000 would be affordable, according to the April 2021 development proposal for Downtown West.

“Google is being a great partner for the city,” Klein said. “They are working to create a neighborhood that will be good for Google and good for the community.”