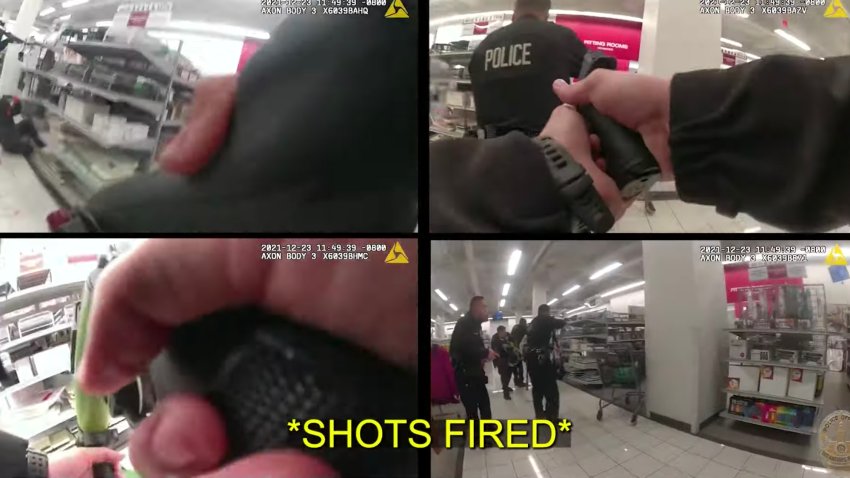 Body camera footage from a police shooting last week that left a 14-year-old girl dead after officers opened fire on a suspect in a North Hollywood Burlington store was released Monday by Los Angeles police.

“We at the LAPD would like to express our most heartfelt condolences and profound regret for this innocent victim, Valentina Orianna Peralta,” the LAPD said in the newly released video. “There are no words to describe the depth of the sorrow we feel for this tragic outcome.”

LAPD police chief Michael Moore expedited the release of the footage, saying he wants the public to get a full accounting of what happened.

Community activists have been anxiously awaiting the footage, demanding answers about whether the officer followed proper protocol. The concern was echoed by others who showed up to place flowers at a memorial outside the store.

People came from all around Los Angeles to build a memorial outside the North Hollywood Burlington store after the LAPD shooting. Two people, the teen and the suspect, died in the shooting that occurred while the store was crowded with holiday shoppers.

“It is a hard loss — right before Christmas. It’s not OK,” said employee John Garcia.

The day before Christmas Eve, police responded to a call of a man assaulting a woman at the store, and who was possibly an active shooter.

On the way there, they received a second call about a shooting and people taking cover inside the store.

When they arrived they found a badly beaten woman bleeding on the second floor.

Security video from the store released by LAPD shows the suspect acting erratically, slamming random objects with a bike lock before he is seen attacking a woman on the second floor. He is also seen dragging the bloodied woman after striking her repeatedly with the bike lock.

Police say there was no gun on the suspect.

Valentina, the 14-year-old girl, was killed when one of the officer’s bullets went through a wall into the dressing room where she was with her mother trying on a dress for her quinceañera. LAPD said in the newly released video that they believe the round skipped off the floor and through the dressing room wall.

In the extremely distressing video, immediately after the suspect is shot, screams can be heard from the dressing room.

A GoFundMe page set up to help the family of Valentina Orellana-Peralta says the girl and her mom came to Van Nuys from Santiago, Chile, just months ago with dreams of a better life.

“They need to be honored — this is just such an unjust not a natural way to die,” resident Paula Kahn said.

On Monday, community activists were demanding answers about whether the officer could have deescalated the situation without using deadly force.

“We’re particularly concerned of the repeated pattern of officer-involved shootings where it seems to be police officers have a practice of shoot first and ask questions later,” Jose Barrera, the California director of League of United Latin American Citizens, said.

The officer who fired the shots has been placed on administrative leave, as is standard practice in police shootings. The shooting is being investigated by the California Department of Justice.