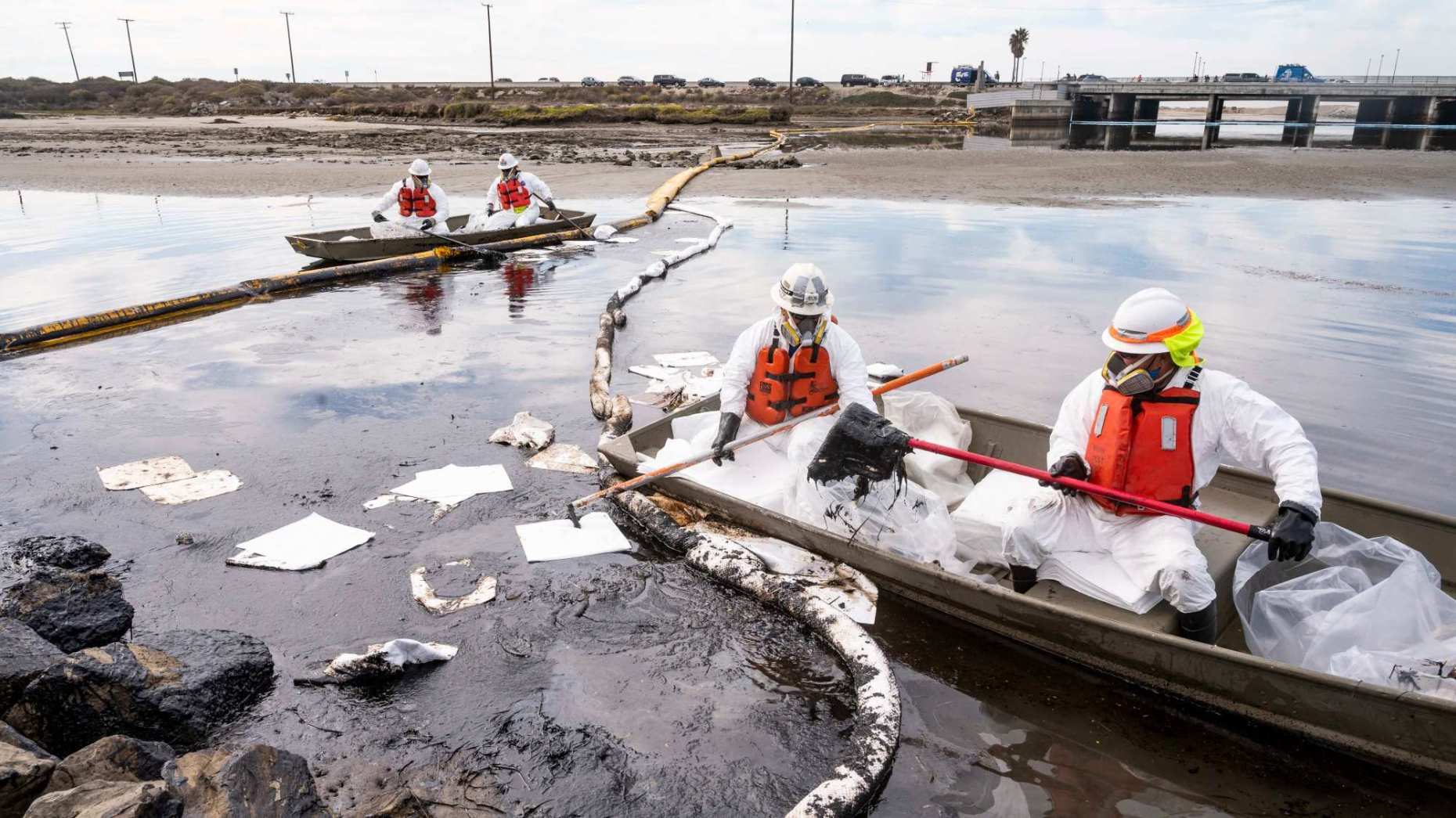 Officials said no more oil is leaking into the waters off Huntington Beach, but weather and ocean flows will be key as they try to contain the spill that has already spread down as far as Dana Point.

Officials with Amplify Energy, which operates the offshore oil rig believed to be the source of the leak, and with the U.S. Coast Guard said in response to a question they’re looking into a ship’s anchor striking and rupturing a pipeline as a possible cause of the spill of at least 126,000 gallons of oil.

“That is one of the distinct possibilities,” Amplify CEO Martyn Willsher said Monday, Oct. 4.

Willsher said the company hasn’t yet pinpointed the origin of the spill, but its divers have inspected 8,000 feet of pipeline and found an “area of interest.”

Asked whether one of the many cargo ships at anchor waiting to enter the Ports of Los Angeles and Long Beach could have caused damage to the pipeline, Willsher said it’s a possibility that is part of the ongoing investigation. Port officials deferred questions to the Coast Guard.

There are hundreds of ships out in the anchorage and the precise location of where those vessels were located, relative to the incident, is being assessed, U.S. Coast Guard Capt. Rebecca Ore said.

Reports about a possible oil spill were left on a federal hotline Friday night, according to government records.

The reports also came hours before officials warned people not to go in the ocean, as the slick grew to an estimated 126,000 gallons and threatened environmental harm to much of Orange County’s 42-mile coastline.

The U.S. Coast Guard contacted county and Huntington Beach officials around 9 a.m. on Saturday, saying they had received reports about oil in the water off the Huntington Beach coast. By 12:15 p.m., the Coast Guard reported to those officials that the oil slick they were responding to was around 13 miles long.

Also at the news conference held at Bolsa Chica State Beach on Monday, District Attorney Todd Spitzer called for an independent investigation into how the spill occurred, with oversight from either his office or federal authorities.

“The company should not be responsible for leading its own investigation with respect to the hundreds of millions of dollars of devastation it did to our environment and economy. We are going to feel the impact of this oil spill for generations,” Spitzer said.

The company’s divers should not go near the pipeline unless they collaborate with independent investigators, he said, adding, “They are biased, they are self-interested and they will do everything they can to try and reduce their damages.”

There will be both federal and state investigations, and Spitzer’s office will receive a report, said Eric Laughlin, public information officer for the state’s Office of Spill Prevention and Response. Other officials reiterated that investigations would be independent from the company.

While Beta Offshore, a subsidiary of Amplify Energy, has the “unified command” and has the resources to pay for the response, the Coast Guard must sign off on any decisions made, Laughlin noted. “There is an investigation underway, I’m sure that’s going to include assessments of the pipeline.”

Crews continued working Monday to contain the oil, which has fouled the water and coastline in Huntington Beach and Newport Beach and has drifted south as far as Laguna Beach and Dana Point. On Monday afternoon, globs of oil were spotted on the sand in Laguna Beach.

By late Monday afternoon, the weather appeared less cooperative and raised concerns it could impede spill monitoring and cleanup efforts.

Showers and thunderstorms with lightning were expected in coastal Orange County the rest of the day, National Weather Service meteorologist Casey Oswant said, and “any lightning would halt their cleanup outside.”

Tuesday and Wednesday were forecast to be dry, with a light sea breeze and one- to three-foot waves, and higher than usual tides were predicted later in the week, peaking at 6.21 feet on Friday, she said.

Huntington Beach, Laguna Beach and Newport Beach have all closed city beaches, Crystal Cove and Huntington state beaches are closed, and the county closed Newport Harbor and beaches it operates in South Laguna and Dana Point.

An update from the California Department of Fish and Wildlife and the Oiled Wildlife Care Network on efforts to rescue and clean any wildlife caught in the spill offered a hopeful view on Monday morning. Though several hundred calls were received, only about 20 turned out to be oiled animals. But with time more affected animals will likely be found.

A representative from the California Department of Fish and Wildlife at the press conference Monday said a fishing closure that spans from Sunset Beach to Dana Point extends 6 miles out to sea and 20 miles long and active patrol boats will be warning people out on the water.

The spill from the rig off Long Beach was first reported Friday night, and Huntington Beach city officials were informed Saturday morning. Laughton said Sunday evening the pipeline could hold 144,000 gallons, but some oil had been recovered straight from the pipeline.

As of Monday morning, 3,250 gallons of oil had been recovered from the water, at least 5,360 feet of boom had been deployed to contain the spill, and at least 14 boats were working on recovery efforts, according to information from the U.S Coast Guard.

Ore said three to four flights per day are taking place over the spill area, with observers mapping the oil’s movement and looking at data on tides, currents and winds to find out where the spill is heading.

It reportedly already reaches south of Dana Point, and “that trajectory is expected to continue,” Ore said.

Aboard a flight Monday morning with the U.S. Coast Guard, Rep. Mike Levin, D-San Juan Capistrano, said he could see oily water from the skies above at various points between Huntington Beach and Dana Point.

At stake is both the environmental impact from the spill and an economic one, as coastal tourism takes a hit while beaches close down to visitors, Levin noted.

“We’ve had to do everything we can to expedite this, to make sure that the impact not only on our environment but also on our economy is minimal,” he said.

Rep. Alan Lowenthal, D-Long Beach, who also represents several Orange County cities, said in a news release he plans to hold a congressional hearing on the oil spill in the House Natural Resources Subcommittee on Energy and Mineral Resources, of which he is the chair, according to a news release.

On Monday, he also called for “a coordinated multi-agency Biden Administration investigation” into the spill, and said in a statement, “It is absolutely critical that we determine the cause of this spill and determine what steps Congress can take to prevent such spills in the future.”

Also Monday, Gov. Gavin Newsom proclaimed a state of emergency in Orange County to support the emergency response to the spill.

“The state is moving to cut red tape and mobilize all available resources to protect public health and the environment,” Newsom said in a Monday night statement.

The emergency proclamation says the governor has ordered “All agencies of the state government utilize and employ state personnel, equipment, and facilities for the performance of any and all activities consistent with the direction of the Office of Emergency Services, the State Emergency Plan, and the California State Oil Spill Contingency Plan.”

Early Monday, dozens of workers in hazmat suits could be seen picking up globs of oil from the shoreline at Huntington State Beach. Passersby stopped to watch the cleanup.

On Sunday, streaks of black were visible along the waterline and clumps of oil dotted the beach. Though the big streaks were no longer visible Monday, patches of the viscous substance remained strewn along the sand and further out at sea.

Ocean conditions on Monday morning were in the workers’ favor. There was a light offshore wind and small swell, which weren’t pushing the toxic oil to shore.

Jayme Markle, who rode a bike from her Huntington Beach home to check out the situation, called it “tragic.”

“It shouldn’t be a surprise because we have oil rigs,” she said. “But you don’t expect this sort of thing. This is a huge tourism town – I don’t how this is going to impact businesses.”

This is the largest spill in Orange County in three decades and it has led to major ecological damage in Huntington Beach that could close the shoreline for weeks or months, officials have said.

Ryan Lawler, owner of Newport Coastal Adventure, said ocean conditions looked much better by Sunday afternoon, and again on Monday when he went out of Dana Point Harbor, where he saw plenty of birds and sea lions, none that looked distressed or oiled.

“I’ve been out on the water and have not seen a single animal – marine mammal or bird – impacted. I can only conclude that they must be doing a good job collecting (the oil) or treating it, or it might have sunk.”

Rich Baranoski, a captain with Newport Coastal Adventure, didn’t know the severity of the spill when he took a tour group out on the water this weekend.

“About 3 miles off, it’s disgusting,” he said Sunday. “Black clumps of water, sheen all over the place and miles of it. Miles and miles of it. There’s dolphins swimming through the oil. It’s disheartening.”

“I understand accidents happen, but at the same time I’m concerned about our environment and really wondering what’s going to happen with our marine life and not to mention the fishing aspects, the lobster guys,” he said.

James Pribram, an environmentalist who grew up in Laguna Beach, stopped by early Monday in time to see workers putting up beach closure signs. There was no oil to be seen on the sand, yet, but that doesn’t mean there’s none floating around offshore; the waters off Laguna Beach are a Marine Protected Area with sensitive ocean habitat.

“In a couple days, we get some west swell and some wind with it. That’s really what we don’t want,” Pribram said. “That’s bringing it right to our shoreline. … It’s going to be a waiting game to see how far it spreads.”