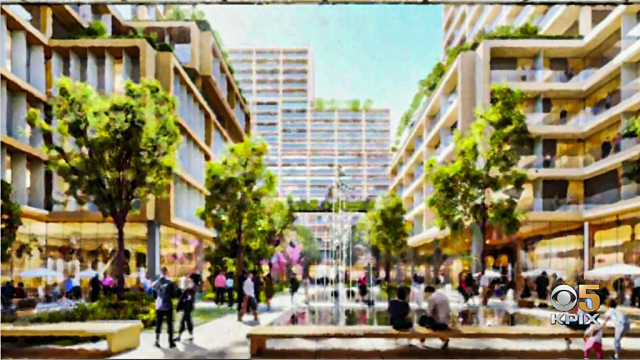 “They came up with this very beautiful and aggressive plan with all these mixed uses,” said Scott Knies, executive director of the San Jose Downtown Association.

“But really the center of it all is the main BART station for downtown,” Knies said.

Except for a few small businesses on Santa Clara Street, Market Street and North First Street, the center of the block is practically a blank slate for developers.

The underground BART station is still a decade or more away, but the ideas are both tantalizing and worrisome for some San Jose residents right now.

“I’m super excited to see BART come to San Jose, but we can’t forget about the working class,” said Greg Oden, who works at a photography studio downtown.

Oden noted that people like him probably won’t be able to live in the developments that are planned.

“My peers, myself and other people I know are struggling just to live,” Oden said.

The BART plans are part of the VTA’s over-arching goal of more transit-oriented development.

The agency also plans to build a 300-unit apartment building in South San Jose
on land now being used as a park-and-ride lot at Blossom Hill Station.

The housing will also provide a user-base for VTA trains and buses, in addition to generating income for the struggling transit agency.

“As we duplicate this model at this and otherstations, we really have an opportunity to impact the revenue system at VTA,” said agency spokeswoman Jessie O’Malley Solis.