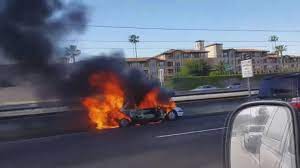 Officers are investigating an early-morning car fire that left one man dead, the San Jose Police Department announced on Sunday.

Police responded to reports of a car fire on Sunday at 5:47 a.m. between Pomona and Barnard Avenues. Inside the vehicle was a deceased man, police said.

The police department said it will work with the San Jose Fire Department to investigate the case.

More information will be released as it becomes available, said police.