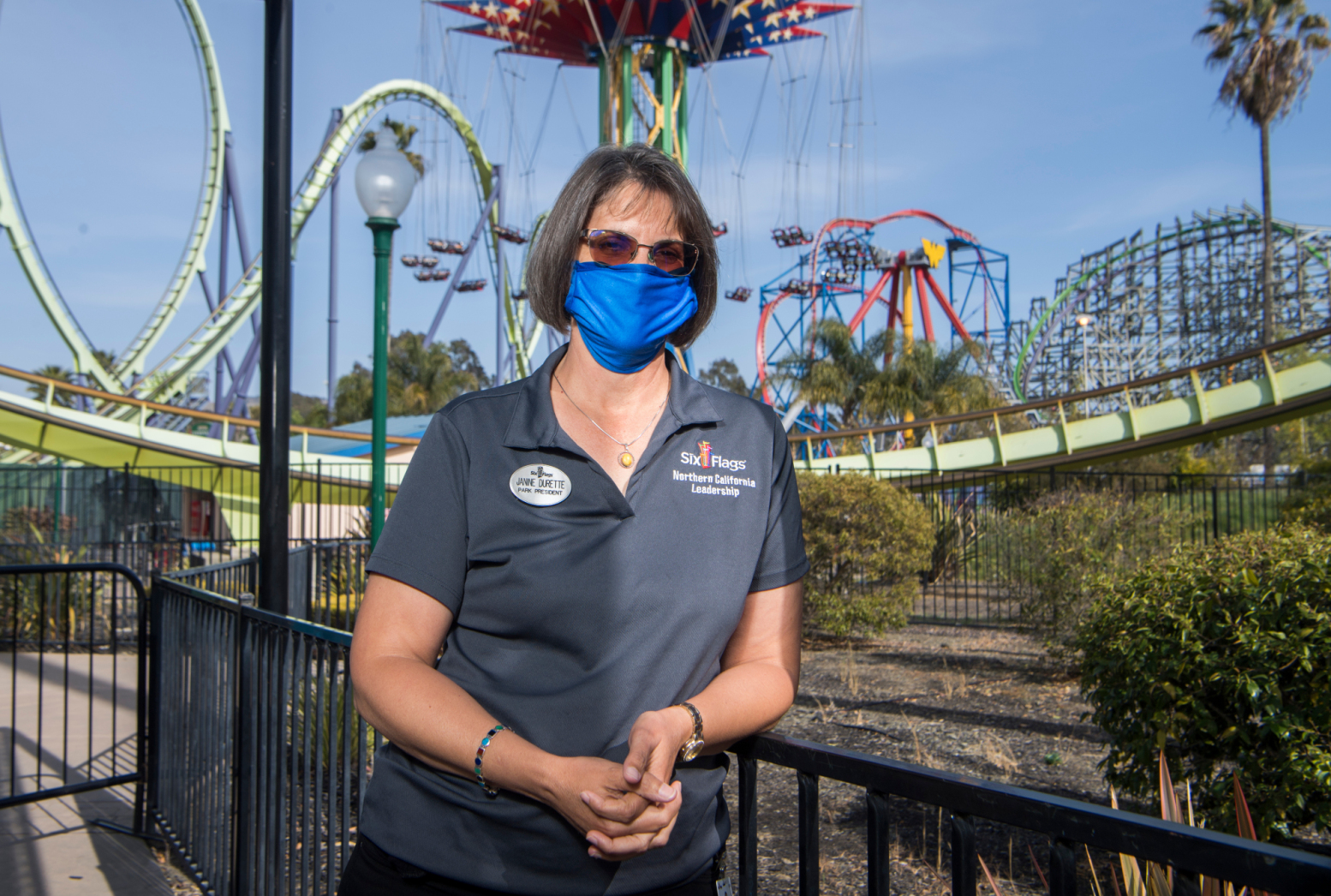 Directly behind Janine Durette’s office desk at Six Flags Discovery Kingdom is a window looking out at a gnarly roller coaster dubbed “Kong.” It’s “one serious gorilla of a ride,” blurts the park’s website and it’s close enough that Durette can feel and hear its steady rumble.

“That is a beautiful sound,” she says, smiling.

It’s a sound that was silenced for an entire year as the Vallejo theme park’s many rides went dormant due to coronavirus concerns and restrictions. But on April 1, with the approval of California health officials, Discovery Kingdom cheerfully cranked up the rides again.

It was a gratifying moment for Durette, a native Canadian who became president of Discovery Kingdom as well as Hurricane Harbor in Concord last October after serving in the same capacity at Six Flags Le Ronde in Montreal. Although the park, as of this writing, is operating at a 15 percent capacity (Solano County is in the red tier of the state’s pandemic recovery system), it at least can again stake its claim to being the “Thrill Capital of Northern California.”

Throughout the pandemic, Discovery Kingdom also has been a model of reinvention. Like other California theme parks, it was shuttered in March 2020. But four months later, it reopened with an animals-only “Marine World Experience.” Then, in December, just as organizers were preparing for their annual “Holiday in the Park” walk-through celebration, a surge in infections triggered shelter-in-place orders. That had Durette’s team scrambling to redesign the attraction to entertain guests while in their cars — complete with millions of twinkling lights and festive music.

Here, Durette talks about adjusting on the flying, teamwork, the thrill of roller coasters and why animals are so therapeutic:

Q: So, April arrives. The park re-opens its rides. What was the feeling around here?

A: It was very, very exciting. It’s our DNA, right? Thrills. We love the animals and the shows. As we’ve seen, they’re a big part of Discovery Kingdom. But thrill rides are the Six Flags brand.  And, wow, there definitely was a pent-up demand for them.

Q: A lot of theme park junkies were deprived of their “fixes” during the pandemic. Generally speaking, what role do you think this and other parks play in our lives?

A: Our job is to offer a memorable day for our guests. So I think our impact is huge — especially when out-of-home entertainment options were few and far between. You can only do so much Netflix, right? We offer an opportunity to get out of the house and enjoy a day in this gorgeous California sunshine. It’s an escape for our guests and it’s a big responsibility for us.

Unfortunately it’s not like it used to be. We can’t currently operate the park 2019 style. You’re loading the rides differently. There’s the social distancing. The masks. It’s a different experience, but we try to make it as pleasant as possible.

Q: You arrived here in October and — bam — just weeks later the park had to make a major holiday adjustment. What was that like?

A: It was a baptism by fire. I was already accustomed to operating in a pandemic. You’re constantly adapting, evaluating and re-analyzing. I just didn’t expect it to happen so quickly after I got here. The stay-at-home order had us pivoting from a walk-through to a drive-through, which had never been done here. It meant having to create a circular route to get vehicles through the park. And that meant looking at areas that usually are dark, or back in the park where we had to decorate. Plus, there were safety concerns and meetings with the appropriate public officials. We did it in seven days and it was a huge, huge task, but it was really worth it.

Q: Would you deem the holiday retrofit a success?

A: I would definitely say it was successful, insomuch that this was a really grim and dark time. That third wave (of infections) was terrible. The attraction gave hope to a lot of folks. We had some guests tell us that it actually saved their lives. You know, folks were going into deep depression. Nothing was open. Nothing was available. Some guests said it was their only real outing since March. Their appreciation was heart warming.

Q: Before you arrived, Discovery Kingdom already had pulled off another clever pivot, reopening as an animal park.

A: Yes, zoos and aquariums fell under different guidelines than theme parks. So it allowed us to open July 2 as the Marine World Experience. (A homage to the park’s former name).

Q: So the animals were heroes in way — helping you get through this?

A: They kept our staff employed. Because the entire park was open — other than the rides — we were able to have not only our animal-care people working, but our food-service employees, our park-service cleanliness people, our security. So it allowed us to have an actual running operation, albeit at a lower scale. It kept us feeling relevant.

Q: Do you think going through this has brought your employees closer in any way?

A: Absolutely. Probably one of the only positives to come out of the pandemic is that it has forced people to work together as a team, to be creative, get out of your comfort zone, think outside of the box and do things for the park that you normally might not do. Everyone has become good at multitasking and this team has displayed some amazing creativity.

Q: When it came to reopening theme parks, California was behind other parts of the U.S. because of stiffer regulations. How frustrating was that?

A: It’s pretty frustrating, especially when other Six Flags parks in North America were open. I mean, we have the same sanitary measures, but we had to wait. … But you have to think positively about the situation you’re in, focus on what you can control and the rest will come.

Q: What are your main concerns going forward?

A: We would love to get to the orange tier and open the park to larger crowds. But, of course, we understand the guidelines and will follow them. It’s disappointing that Solano is still in red when the surrounding areas are in orange, but we get it. The other concern is the June 15 announcement that we’re expecting (from Gov. Gavin Newsom, who hopes to lift most statewide COVID-19 restrictions). What does that mean? What does that look like?

Q: OK, so we need to know: Are you a huge roller-coaster geek?

A: (Laughing) I was in my youth … Um, I wouldn’t say it’s my favorite thing to do. Age does certain things to you. But I love watching people on roller coasters screaming. I think that’s a hoot. I am a hard-core animal lover, though. To me, they are very special. When you’re having a not-so-good day, you can go see the seals or the penguins, and it’s like your mood is immediately lifted.