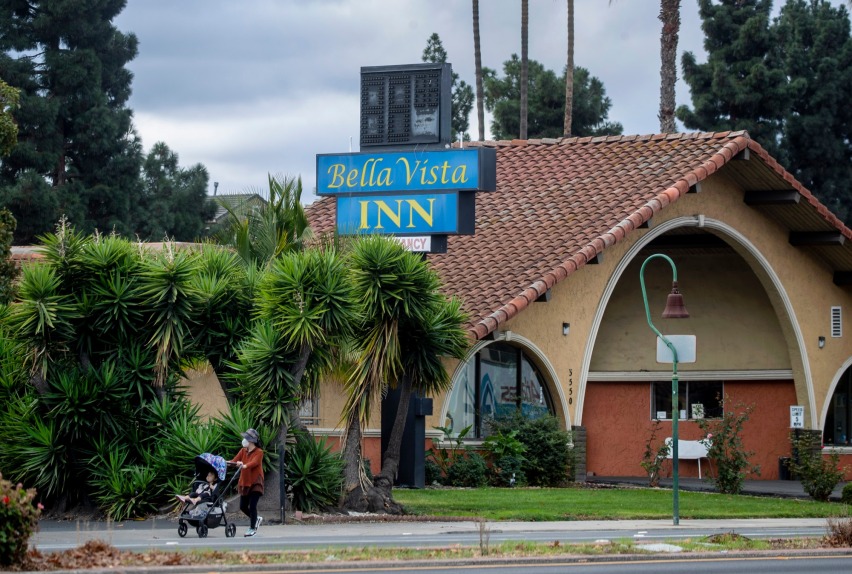 Santa Clara County Supervisors on Tuesday approved plans to turn hotels in Mountain View and Santa Clara into housing for homeless and low-income residents amid a heated debate that pit advocates pushing for more solutions to the growing unhoused population against those worried about how the new programs would affect their neighborhoods.

The sites include The Crestview, a 61-room hotel in Mountain View bordering Sunnyvale, and the Bella Vista Inn, a 64-unit hotel in Santa Clara. Both are located on El Camino Real and will cost $33 million in Homekey funding — money that comes from the state to address homelessness — for the county to purchase the hotels.

Altogether, the sites could create up to 180 units of affordable housing. The development of a new 120-unit facility at the Santa Clara hotel is still pending approval and would replace the existing structure.

By this coming January, the county will own both hotels and residents are expected in one year.

The decision by the supervisors marks a broader push by the county in trying to alleviate homelessness. Last year, the Homekey project converted 1,600 Bay Area apartments, hotels and other units into housing for unhoused residents. The state offered another $2.75 billion in September for counties, cities and nonprofits for upcoming projects.

On Tuesday, the Mountain View and Santa Clara Homekey sites sparked an hourslong debate that drew dozens of residents. Supervisor Otto Lee, whose district is close to the Mountain View site, said that his office had received roughly 400 letters, emails and calls about the proposals.

In an emotional response in defense of the sites, Supervisor Joe Simitian — whose District 5 includes the Mountain View project — told a story about how he and his single mother lived in a low-income apartment when he was a child.

“That’s where we got a chance to build a better life for both of us,” said Simitian, who was born in Cambridge, Mass.. “When we talk about those people (in the Homekey sites), it’s me and my mother all those years ago.”

The units will be classified as permanent supportive housing, which provides case management and supportive services, as well as low income housing. Both will have residents paying rent on year-long leases. Applicants will pay rent based on income and undergo background checks. In addition, the management companies overseeing the two sites will have on-site security. Those companies are still being chosen

While some residents and housing advocates supported the projects, pointing out the need for more affordable housing options in areas known for expensive rents and home prices, others voiced concerns about the possibility of the sites attracting crime. They also accused the county of not providing enough information to the nearby residents about the projects. When the Mountain View site was initially proposed in January, advocates both for and against the project created petitions to halt the new housing or proceed forward.

“I’m a mother, and all the parents of my kids’ (friends), they strongly oppose this project,” said a Sunnyvale resident who identified herself as Erin. “Please show some sympathy and respect for parents who are really afraid. Please open your eyes and see the facts.”

But supervisors tried to ease critics concerns with a “community impact report” that would be drafted 18 months after residents move in, which the board later approved. In addition, yearly community meetings will be held by the site’s management company so neighbors in the surrounding area can voice opinions about the projects.

“It will provide accountability and allow us to speak factually about what does or doesn’t happen,” said Simitian.

Simitian also rejected the notion that the county hasn’t done enough to let residents know about the proposals. On the Mountain View project alone, he said, there have been two city council meetings, three county supervisor meetings, articles in local press and postcards handed out to residents within 1000 feet on the projects, he said.

“I have visited the site personally,” he said. “I have walked the site. I have driven through the neighborhoods that have surrounded it.”

In addition to the Mountain View and Santa Clara projects, the county is proposing another seven Homekey sites that would produce a total of 800 housing units including the developments that were approved on Tuesday. In addition to Homekey, the county also aims to end family homelessness by 2025 through the “Heading Home” campaign, a program that may get a funding boost through the use of federal COVID-19 relief dollars.