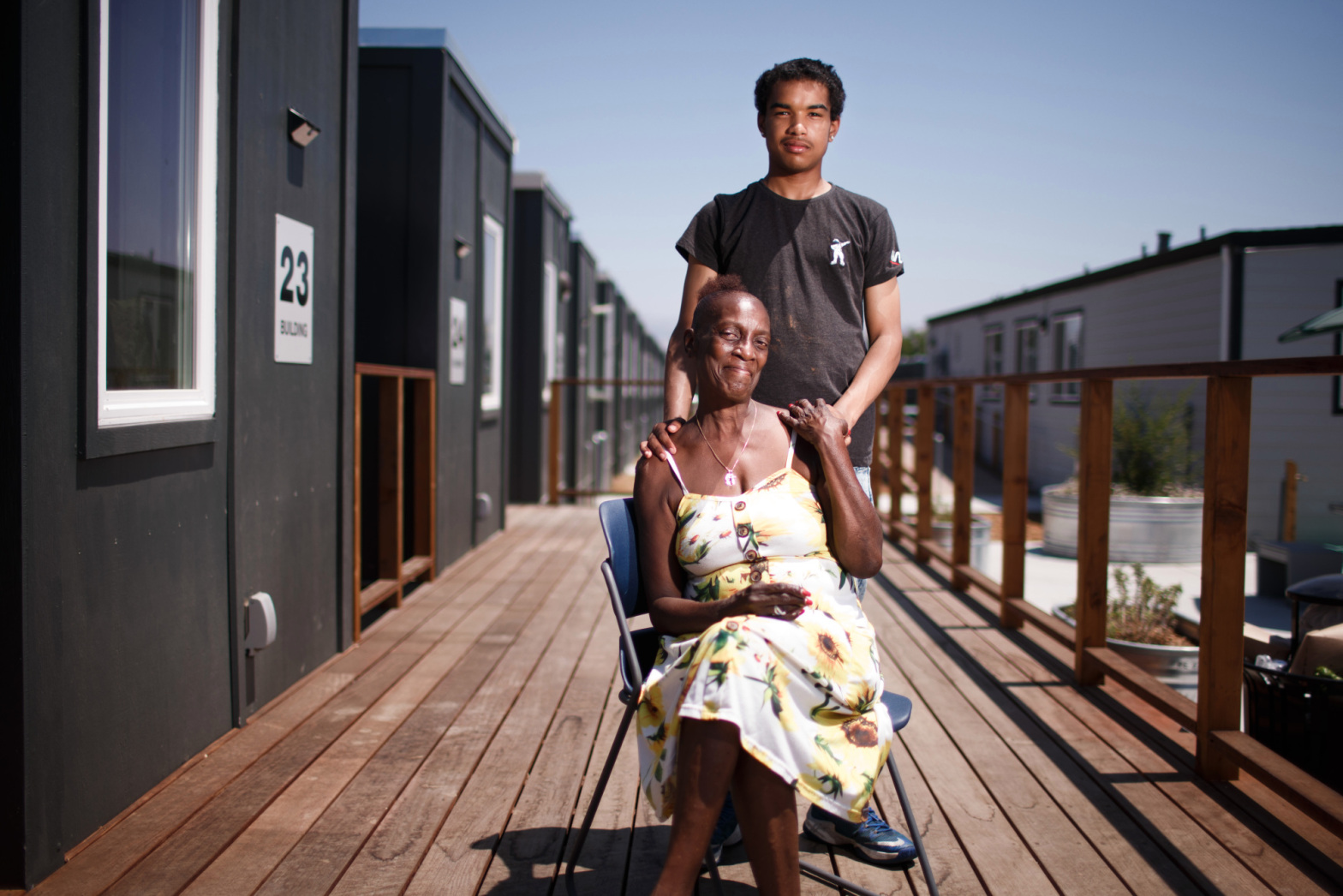 Like many 15-year-old boys, Dwon’ya looks up to his big brother, spends most of his free time doing what he loves most — making music — and can’t wait to finally return to school this fall with his friends.

But the highlight of his summer vacation, if anyone asks, was finally having a place where he, his 16-year-old brother Dwight and his grandmother Ludia can feel at home.

After more than a year of bouncing around hotels and sleeping in homeless shelters, Dwon’ya and his family moved into a studio in late May — one that was actually a shipping container, recycled for habitation. Today, they are members of San Jose’s newest community for unhoused residents on Evans Lane, near the Willow Glen neighborhood.

To some, their tiny 8-by-40-foot home might not seem like much. It kind of resembles a miniature dorm suite, complete with two small rooms — each furnished solely with a set of metal bunkbeds — and a bathroom that serves as a buffer in between.

But the family has their own space, with four walls and doors that they can close at night.

And for them, that’s a giant leap from the gymnasium they previously lived in with dozens of others at a homeless shelter set up during the pandemic in San Jose’s Camden Community Center.

“I was really happy about the move, because I didn’t want to be at the other place anymore,” Dwon’ya said with a beaming smile. “Now I won’t get distracted too easily, cause when I go into my room, I can close the door and just stay there.”

In 2019, Santa Clara County’s biennial count indicated that 269 families like Dwon’ya’s were experiencing homelessness. Nationwide, a third of the homeless population in 2018 were families, the majority of them headed by single women, according to the U.S. Department of Housing and Urban Development.

The Evans Lane housing, located on city-owned land sandwiched between Curtner Avenue, Highway 87 and the Almaden Expressway, is one of five interim housing sites the city has provided the past two years to help unhoused residents transition to eventual permanent homes.

What sets Evans Lane site apart is that it’s the only interim housing community in San Jose — and possibly all of Northern California — that is completely devoted to unhoused families.

As many as 49 families of various sizes can be accommodated in the community. The site, which is fenced and monitored by a security guard 24/7, features a playground, garden, dog park, basketball hoop, picnic area and communal kitchen and laundry room.

“We wanted to make it really integrated in the neighborhood, and there’s no better way to do that than to have children playing together,” said Councilmember Dev Davis, who represents the area.

Kenia Dominguez of nonprofit People Assisting The Homeless (PATH) has been serving as the caseworker for Dwon’ya and his family the past nine months. She meets with them regularly to establish goals related to finances, housing, health and employment, and she helps them gather and complete the paperwork needed to get there.

As Dominguez sees it, housing sites such as Evans Lane are precisely what it’s going to take to make sure more families and children get the stability they need to survive — and even thrive — in the Bay Area.

“This is the time frame in which parents need the most help,” she said. “And in such a short time since we’ve launched this program, I’ve seen such a drastic difference in their behaviors and their engagement and their trust for the system. I think that’s what is most important.”

Plans to turn the 6-acre plot into a community for unhoused residents had been in the works for more than a half decade, but the project kept running into delays, in part because of stiff resistance from some neighbors and also because of the original developer’s failure to secure sufficient financing.

City officials ultimately managed to get the project over the finish line partially thanks to private funding that came through to pay for the units and to pandemic-related state emergency orders that waived some time-consuming red tape.

The interim homes take up about a third of the property, and the city’s end goal is to transform the rest into an apartment complex that will serve as permanent housing for residents with a mix of incomes — from extremely low-income families such as Dwon’ya’s to moderate-income ones.

“This is just one of multiple steps in the process,” Davis said. “But it feels really good to be providing a home for people as they are waiting for their forever home.”

Evans Lane is meant to give families dignity and a feel for what it’s like having a place of their own, but they are expected to transition into more permanent settings within 120 days of arriving.

And although Dwon’ya’s family is elated about their new space, the mission of the new community appears to be taking hold.

“I didn’t know what to imagine, but it’s definitely a godsend,” said Dwon’ya’s grandmother, Ludia Burnett. “I have a better peace of mind to try and figure out what our next move is going to be, and I’m ready to do what I need to do to further myself out there.”