California renters locked out of 7,677 homes despite eviction ban 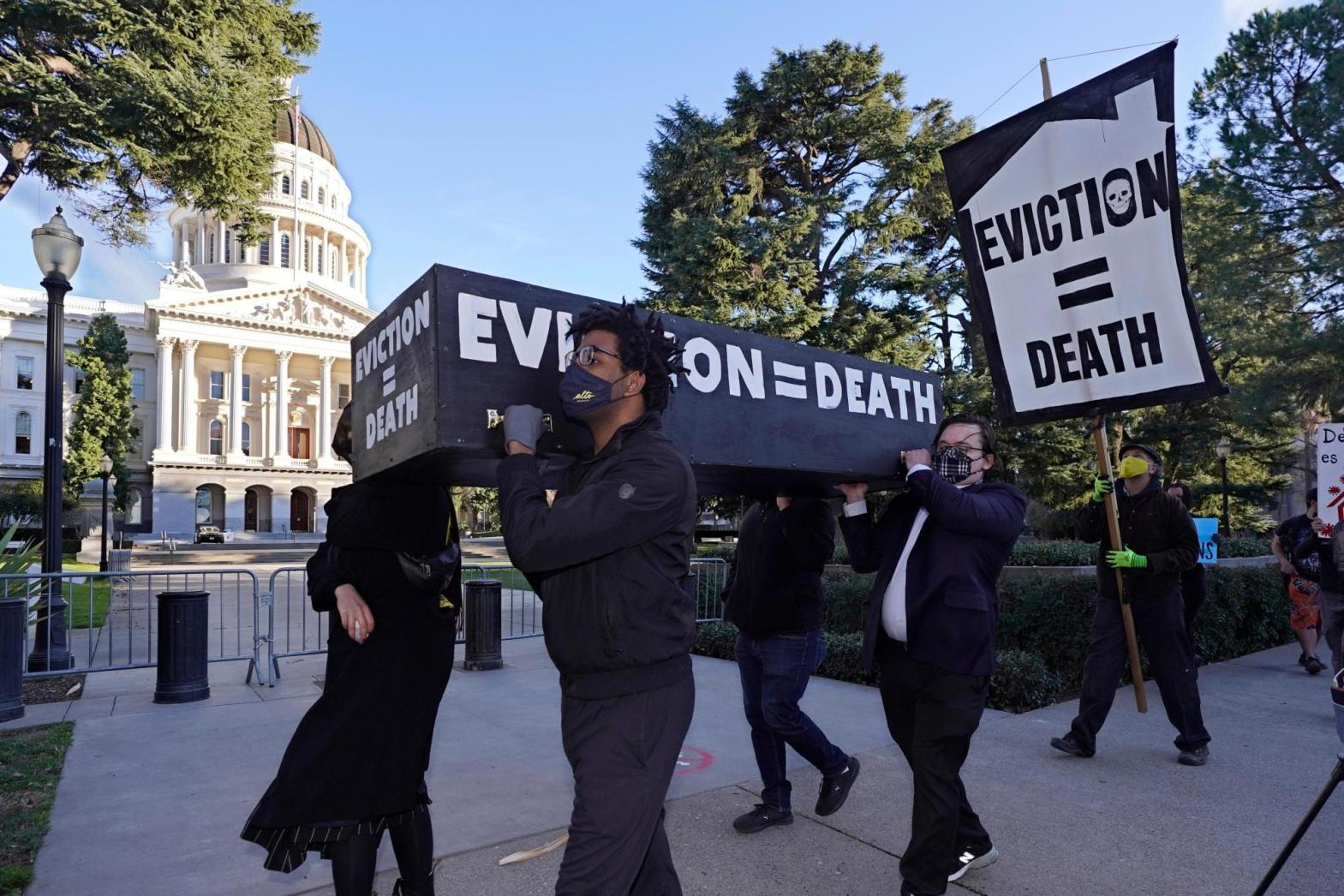 Gov. Gavin Newsom and the Legislature this week extended an eviction moratoriumdesigned to keep California tenants who missed rent payments in their homes during the 15-month coronavirus pandemic.

But that safety net has gaping holes — and thousands of renters have fallen through, a CalMatters analysis shows.

From July 2020 through March 2021, sheriff’s departments across the state-enforced lockouts of at least 7,677 households, according to data obtained through public records requests from all but two of California’s 58 counties.

The numbers show residential evictions increased dramatically in the first three months of 2021 — 3,675, compared with 4,002 in the last six months of 2020. The analysis also shows a wide gap in eviction rates across the state — far higher in parts of the Central Valley and Inland Empire compared with the Bay Area and some smaller coastal counties. Los Angeles also experienced higher-than-average eviction rates.

The total number of evictions in the data could be as many as 9,150; 16 counties either failed to provide addresses, which CalMatters used to verify if the lockouts were residential, didn’t confirm whether the eviction was carried to completion or provided incomplete data.

Similar data from March 2020 until August showed the state carried out at least 2,000 evictions, bringing the total number of households locked out throughout the pandemic to nearly 10,000, at minimum. The numbers also don’t include cases when tenants left their homes before a court got involved. Despite the limitations of the data, this analysis is the most comprehensive look yet at the pandemic’s impact on housing stability in California.

“Perhaps one of the greatest disservices that politicians and their staff had made through this whole process is using the term ‘moratorium’ because we have pretty much never had a true moratorium in the state of California,” said Katie McKeon, staff attorney at the Public Counsel Law Center in Los Angeles, which represents tenants.

At the same time, the state’s effort to provide rent relief has been slow and cumbersome; as of June 30, only about 6,600 households have received $73 million since January, while roughly 94,000 tenants have sought more than $775 million.

California’s eviction ban had been set to end June 30, but Newsom and lawmakers agreed at the last minute to extend the protections through Sept. 30, in part to give more time to distribute $5.2 billion in federal rent relief to tenants and landlords alike.

Chiu, who leads the Assembly Housing Committee, has also been cautious about touting the protections as a blanket ban: “At best, it’s a halt to one category of evictions, but there are many, many grounds for evictions that do not have protections,” he said.

Repeated attempts to beef up those protections have faced vehement opposition by the powerful landlord lobby, which has argued that many tenants are abusing protections at the expense of struggling landlords.

Debra Carlton, executive vice president of the California Apartment Association, chalked up a majority of evictions to nuisances and disturbances to health and safety, which are still allowed even under the moratorium.

“Unfortunately there’s a spin in the media that all tenants deserve to be protected, but unfortunately, we have all walks of life in apartments and in multifamily. And if you’ve ever lived there, sometimes you have a neighbor who just drives you nuts,” Carlton said. “Most of these have to be pretty egregious for the court to order it.”

Indeed, Carlton said she was surprised by how low the eviction numbers were, compared with the roughly six million rental units in California.

While there are no clear causes for the differences in eviction rates, CalMatters found consistent correlations with four factors: whether tenants had additional protections from a local moratorium; how much discretion a sheriff’s office used in carrying out evictions; whether county courthouses closed during the pandemic; and whether a county had a local eviction defense network before the pandemic.

“At the county level, we were just seeing a whole lot of nothing,” said Amber Crowell, an assistant professor of sociology at Fresno State who has been studying and advocating for eviction protections in Fresno. Crowell said most cities and counties did a poor job of communicating to renters their rights and protections, even under the state law.

The most significant halt, Crowell said, came from the state’s Judicial Council, which stopped eviction proceedings in courts between last April and September. After that, many courthouses stayed online, which delayed jury trials. That hiatus helps explain the jump in evictions from 2020 to 2021.

“If a landlord is actually doing a legal eviction, it does take some time,” said McKeon, from the Public Counsel Law Center. “And it’s taking a longer time because of the COVID restrictions and because of the backlog. So, frankly, I wouldn’t be surprised if there were a lot of cases filed in September and October that didn’t really work their way through the system until January or February.”

The California Apartment Association pushed to prevent local jurisdictions from enacting stronger protections atop the state ones. That push was successful in the latest round of eviction protections, at least in relation to nonpayment of rent. Cities can’t make it any more difficult for a landlord to evict over missed rent, but they can shield tenants from evictions over other reasons, according to Chiu.

For example, Los Angeles County last week passed a moratorium extension that said an elderly tenant cannot be evicted unless the person moving into the home is also elderly. That protection will remain in place through at least Sept. 30.