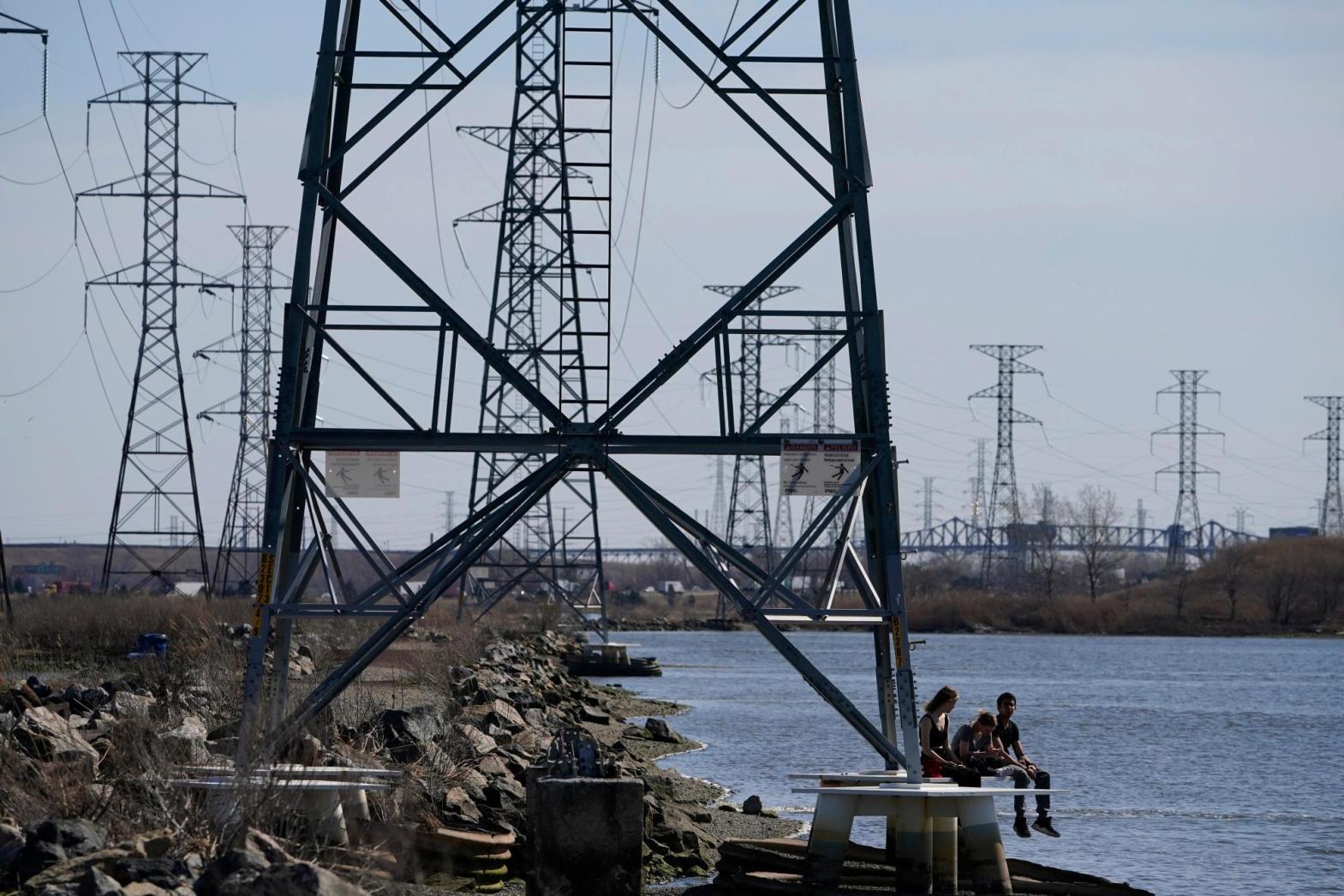 If the nation is to meet President Joe Biden’s goal of cutting America’s greenhouse gas emissions in half by the end of the decade, it will have to undertake a vast transformation toward renewable energy.

And to achieve that, the near-impossible will be required: A broad network of transmission lines will have to be built to carry solar and wind power across the continent to deliver electricity to homes and businesses — something the administration envisions accomplishing by 2035.

What’s more, utility-scale batteries on a widespread scale, to store renewable energy for peak-use periods, would be needed.

The financial and technological tasks of linking cleaner power sources to an aging electric grid pummeled by climate change are daunting enough. Add to them the legal fights that states and localities will likely mount to fight the build-outs of transmission lines in their areas, and the challenges become extraordinary.

It normally takes years to win authorization to build new transmission lines. Because many such decisions are made at the local level, critics across the country who oppose having wires strung through their landscapes could further prolong the battles.

“I’m very worried,” said Larry Gasteiger, executive director of the transmission industry trade group WIRES. “Given the timeframes we’re looking at, it’s almost hard to see how we meet them. We really need to have everyone puling on the oars at the same time and in the same direction, and unfortunately, we’re not seeing that, to be honest.”

The idea behind the Biden plan for cleaner power transmission is to transform the fuel for America’s power grid from mostly coal and natural gas to wind, solar and hydroelectric power. The U.S. electricity system relies on about 600,000 miles of transmission lines that carry electricity from power plants or dams to communities and 5.5 million miles of local distribution lines, according to the American Society of Civil Engineers.

Some of the consequences of climate change — more frequent storms, wildfires and other extreme weather — include damage to the nation’s electric grid. Severe weather was determined to be the predominant cause of more than 300 transmission outage events from 2014 to 2018, according to the American Society of Civil Engineers. An additional 200 outages were caused by transmission disruptions or interruptions, which are essentially unexpected failures. Most of the nation’s transmission lines were strung in the mid-20th century with just a 50-year life expectancy, the group said.

That reality hit hard in February. Severe snowstorms in Texas caused deadly power outages that lasted days, killing more than 100 people. In California, Pacific Gas & Electric’s crumbling equipment sparked a series of deadly wildfires in recent years, and the worst, in the town of Paradise, California, killed 85 people in 2018. Residents throughout California frequently lose power as utilities shut it off to reduce the chance that their old equipment could start a wildfire.

Even while extreme weather erodes the nation’s existing infrastructure, the need for reliable electricity to power an ever-growing number of electronic devices and vehicles is sure to surge. Given the state of the electric grid and the ambitious nature of the goals, Gasteiger calls Biden’s emissions goal, with its dependence on transmission lines, a “moonshot effort.”

To reach the president’s goal of a 50% reduction in overall greenhouse gas emissions by 2030, the nation would have to stop using coal entirely by then and let consumption of oil and gas decline by 2% every year, according to Philip Verleger, a longtime energy analyst. Yet to meet the nation’s energy demand, he said, the United States would have to double the amount of energy that’s produced annually by wind and solar.

“I doubt that’s practical,” Verleger said. “You just can’t put up that many windmills that fast. And there may not be that many places to put windmills.”

The electric power generated by wind and solar has been growing at impressive clips, with wind power generation rising at a 14% annual rate from 2010 to 2020, and solar growing at a rate of 54%, Verleger said. But he doubts that the pace for solar growth can be maintained.

The nation obtained about 21% of its electricity from renewable sources in 2020, a share is expected to grow to 42% by 2050, according to an estimate made by the U.S. Energy Information Administration in February, before Biden’s accelerated goal was announced.

But it can take years to get high-voltage transmission lines approved, let alone built. Many plans will face resistance from landowners or communities in the path.

Those battles have killed ambitious projects before, including the Clean Line — a quest to build a 700-mile transmission line to deliver wind energy from Oklahoma to Tennessee. The project had obtained federal approval. But given opposition from landowners and politicians in Arkansas and Tennessee, it couldn’t win all the rights of way. After a decade of planning, investing and efforts for approvals, the firm that was developing the transmission line accepted defeat and shut down.

Even projects that ultimately succeed tend to take far longer than expected. A 730-mile transmission line to carry wind energy from turbines in Wyoming to the electricity-hungry Southwest, begun in 2005, took 15 years to gain all the required federal and local permitting. Final approval ultimately paved the way for the construction of the TransWest Express Transmission Project to begin.

“It’s mostly local, not federal, authority,” Verleger said. “Is this administration going to issue rules that override the states? Will the Supreme Court approve them? How many years will that take?”

A fossil fuel power plant can be built near the populations that will use its energy. By contrast, wind and solar power is often developed in the Great Plains. Wind turbines in Texas, Iowa, Oklahoma, Kansas and Illinois provide more than half of the nation’s wind-generated electricity, according to the Energy Information Administration. Yet that power is most needed by bustling cities along the coasts.

“You have to build a lot of transmission lines, and people have made that very, very difficult,” said Michael Lynch, president of Strategic Energy and Economic Research. “You’ve got the ‘Nimby’ (Not In My Back Yard), the ‘Numby’ (Not Under My Back Yard), and ‘Banana’ (Build Absolutely Nothing Anywhere Near Anyone). Those are still very powerful political drivers around the country.”

Many steps and players are involved in building inter-regional transmission lines. The transmission system, which includes high-voltage lines that bring electricity from power sources to communities, is regulated by the Federal Energy Regulatory Commission. It approves rates for transmission lines.

But permitting and siting for transmission is typically approved at the state and local level, Gasteiger said. The distribution system, which strings power within communities, is regulated by a myriad collection of state and local agencies.

“It’s the nature of transmission that it takes an awfully long time to get it from start to finish to get it built and put into service,” Gasteiger said.

The cost of decarbonizing the power sector is yet another hurdle. Using the technology available then, Wood Mackenzie estimated in 2019 that to fully decarbonize the U.S. power grid, including eliminating all fossil fuels and building the new generation and transmission sources, would cost $4.5 trillion. That would cost every U.S. household about $35,000, or $2,000 a year for 20 years.

The expense of building or repairing transmission lines is often borne by utilities, which, in turn, generally pass the costs on to customers. Thousands of utilities dot the country. Building transmission lines requires coordination among those companies and the cities, states and private properties where the lines must cross.

To spur investment in transmission, Congress directed the Federal Energy Regulatory Commission in 2005 to begin providing incentives for transmission projects. The commission, though, began scaling back those incentives in 2012.

“I’m hearing a lot of happy talk,” Gasteiger said. “I’m not seeing actions that match up with the talk about how much transmission is needed.”

Analysts have been running scenarios to estimate whether Biden’s goal of slashing greenhouse gas emissions by roughly half over the next nine years is realistic. In S&P Global Platts Analytics’ most-likely-case scenario, which envisions a widespread adoption of electric vehicles, increased penetration of renewables and declines in coal generation, the United States would reduce its carbon dioxide emissions by about 27% by 2030 compared with 2005 levels.

Under that scenario, even if all remaining coal burning were eliminated by 2030, that would still account for only about a quarter of the reductions needed. The remaining cuts that would be needed to achieve a 50% reduction would be nearly equivalent to the total emissions that are expected from gasoline in 2030, said Roman Kramarchuk, head of future energy analytics at S&P.

Yet the goal isn’t necessarily impossible, Verleger said. Back in the 1970’s, he noted, there was concern that a lack of copper to string phone wires across Africa would prevent many Africans from attaining telephone service. Yet over time, most people obtained service via cellphones instead of from landlines. So what was imagined as a logistical hurdle evaporated.