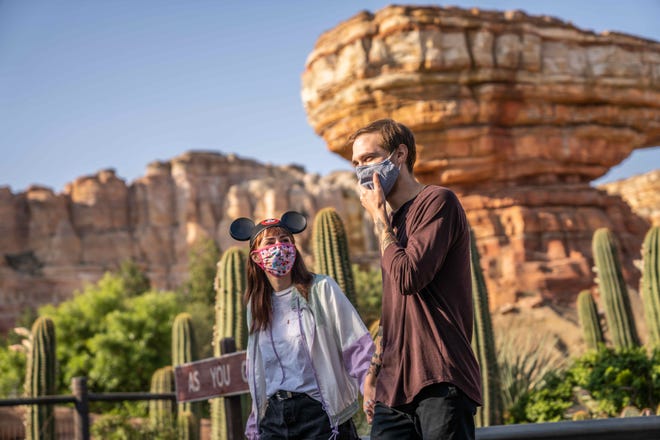 Buzz: The reopening of Disneyland’s theme parks and its tourist-attraction peers across California aren’t a miracle cure for the state’s battered job market. That’s because industries outside of leisure and hospitality account for 58% of California’s job losses in 13 months of pandemic life.

Source: My trusty spreadsheet’s analysis of a report by Fitch Ratings looking at job losses from February 2020 through March 2021. Fitch compared the leisure and hospitality employment niches — entertainment venues, recreation attractions, hotels and restaurants — with the rest of the workforce.

California’s decision to ease pandemic-related business restrictions means Walt Disney Co.’s two Anaheim theme parks can reopen Friday, April 30 for the first time in over a year. It will certainly be a boost to local tourism and related industries as will similar reopenings at other entertainment hubs across the state.

It’s good news for workers in what I call the “fun” businesses that make up the leisure and hospitality industries.They were the most affected slice of the state’s job market last year, accounting for 42% of California’s 1.25 million statewide jobs losses in the pandemic era.

But that means there were plenty of job cuts in other industries.

There were also 29 states in which leisure and hospitality industries were a bigger slice of job cuts over 13 months, led by Nevada at 72%, South Dakota at 61% and Montana at 55%. Nationally, 37% of all job cuts can be tied to the businesses of fun.

But we cannot overlook the rest of California’s economy, which remains 5% below its pre-pandemic employment — the ninth-largest loss among the states. The worst was seen in Hawaii, down 9.8%, followed by New York, down 6.7% and Louisiana, down 5.7%.

By the way, two states — Idaho and Utah — actually have more jobs than pre-pandemic employment levels. Oh, and the smallest share of job drops tied to fun businesses were seen in Wyoming at 5%; Oklahoma at 9%; and North Dakota at 20%.

The “stay at home” mandates saved lives. Since the start of the pandemic, California’s per-capita rate of COVID-19 deaths was better than 29 other states.

Mickey and his theme park pals, who are reopening at 25% of capacity, will be a welcome but modest boost to the job market.

Fitch analyst Olu Sonola does not expect a quick rebound for leisure and hospitality, writing “recovery in these sectors is picking up slightly, but will be prolonged given continued travel restrictions and consumer reluctance to travel.”