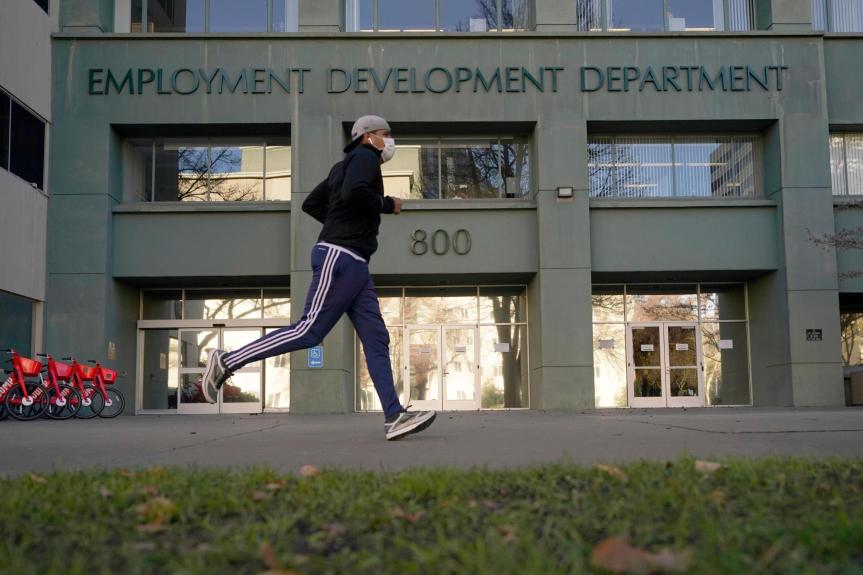 California Gov. Gavin Newsom’s administration on Thursday announced a major change in how the state pays unemployment benefits, potentially unlocking payments for up to 100,000 people who have gone weeks or months without assistance.

Getting unemployment benefits is a two-step process. First, state officials must decide if people are eligible. If they are, the state starts paying them. But those people must contact the state every two weeks to confirm they are still eligible to keep getting paid.

The Employment Development Department announced Thursday it would keep paying people unemployment benefits even while they are investigating their eligibility. The change is part of a lawsuit settlement between the state and the Center for Workers’ Rights, an advocacy group.

The change applies only to people who have certified for benefits and have already received at least one week of payment in the past. Daniela Urban, the group’s executive director, said it could impact up to 100,000 people.

“This is a monumental change by EDD that will allow more claimants to be paid on time,” she said.

Unemployment claims skyrocketed across the country during the pandemic, causing backlogs in many states. Claims have slowed since then, but California still has more than 3 million people receiving some form of unemployment benefits. The state has had a persistent backlog throughout the pandemic.

The change is not without risk for Newsom, who is facing a recall election in September. The governor has been heavily criticized for failing to stop billions of dollars in fraudulent benefit payments to prison inmates and others who were not eligible to receive them. But he’s also faced complaints for a growing backlog of people with legitimate claims who have been unable to get paid because of a complex bureaucracy overwhelmed by the pandemic.

“There’s a continuing trade-off between rapid payment of unemployment insurance claims and anti-fraud protocols,” said Michael Bernick, a former Employment Development Department director who is now an attorney for the Duane Morris law firm. “This action today in paying continuing claims that have had previous verifications seems to have low fraud risks, while reducing the backlogs.”

It’s possible this action will cause the state to pay people who are not eligible. In a news release, the Employment Development Department said people who get benefits when they are not eligible could have to pay those back at some point. But it is possible to waive repayment if people claim financial hardship and the overpayment was not the result of fraud.

State Assemblyman Jim Patterson, a Republican from Fresno, said the state’s action is a “stunning admission that they can’t do their fundamental task” of paying legitimate claims while rooting out fraud.

“Now to clear their giant backlog, they’re going to take the dangerous risk of paying fraudsters, too,” Patterson said.

Since March 2020, more than 23 million people have filed unemployment claims in California, and the state has paid $160 billion in benefits. Meanwhile, more than 226,000 people are still waiting for the state to resolve their claims and pay them.

They include 57-year-old Abdulkarim Adam, who lost his job as a bus driver for a private company during the pandemic. The state stopped paying him unemployment benefits in March and never told him why, he said.

Adam had to borrow money from friends and move in with his sons while he waited. He said he called the state every day but could not get through. He was surprised to later receive a text message from the agency, asking for feedback on their customer service.

Adam said he replied with a flattering message, hoping that would spur the agency to pay him faster. When that didn’t work, he later sent an angry message comparing the agency to the authoritarian dictatorship in North Korea.

He was relieved on Thursday to finally hear about the state’s policy change and hoped it would get him his money faster.

“It will ease a lot of financial difficulties, and it will improve our lives,” he said.

The Employment Development Department received more than 5.8 million calls from 421,005 unique callers in the final two weeks of June, according to a report posted on the department’s website. The department said it answered 478,749 calls during that period.

Urban said many of those calls were from people like Adam wondering why their benefits were halted. She said fewer of those people will likely call now that they know their benefits won’t be interrupted.

“I think it will allow claimants to be more confident in relying on the support of these unemployment benefits, while they still have them, as they look for post-pandemic work,” she said.