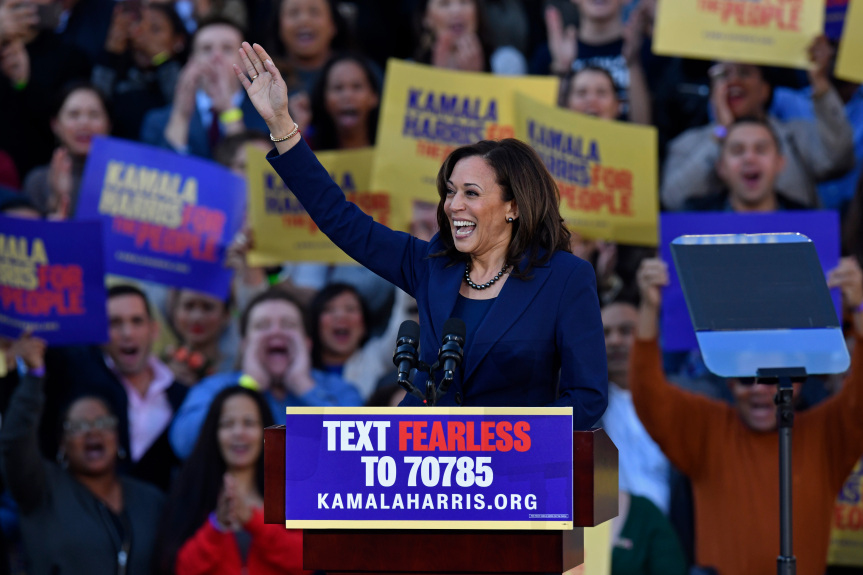 With Joe Biden on the cusp of announcing his running mate on the Democratic presidential ticket, two women of color from the Golden State appear to be on the shortlist. So why don’t California voters seem that excited?

Sen. Kamala Harris is considered a top contender, and Los Angeles Congresswoman Karen Bass’s name has also surfaced. Biden is expected to make an announcement as early as next week.

But the former vice president doesn’t need their help carrying the Golden State and it’s not clear Harris — with far more name recognition than Bass — would generate a lot of enthusiasm, even among voters in her home state.

After a rally to launch her own presidential campaign in Oakland drew thousands, some analysts predicted Harris would be a real contender for the top job. But amid scrutiny of her record and rumors of campaign infighting, her bid for the White House fizzled even before the California primary.

“I can’t see it exciting me that much,” said Michael Young, a Bernie Sanders supporter from Richmond who doesn’t like Harris’s record as a prosecutor and has little faith she’ll rein in what he sees as Biden’s worst impulses.

Vice presidential announcements, including ones this historic — with the likelihood of a Black woman joining the ticket — are meant to rev up parties and give campaigns a bump as the race enters its final 100 days. But Young isn’t alone in his lack of fervor.

With Biden enjoying a double-digit lead in some national polls, longtime Democratic strategist Darry Sragow has talked to donors, operatives, staffers and others and heard one message repeatedly.

“The overwhelming sentiment on the part of all these insiders is they want Biden to pick somebody who is going to cement his victory and they don’t particularly care who it is,” Sragow said.

That’s not to say that Harris doesn’t have her California supporters. Lateefah Simon, a Bay Area civil rights advocate who worked under Harris as leader of San Francisco’s youth anti-recidivism effort, thinks her former boss is the woman for the VP job. And while she’s heard the criticisms of Harris as too ambitious or the critiques of her presidential campaign as lackluster, she thinks that if Harris is chosen, the run-up to November will be different.

In the primary, Simon said, there were lots of candidates angling for attention by talking about free college or anti-poverty measures or universal basic income. Now she thinks Harris can help Biden build a coalition and harness that primary energy.

“Having a local girl raised in Oakland and Berkeley being the number two in the White House?” Simon said. “Listen, she’s had to go into mostly white spaces in criminal justice and and make her way. Kamala can be successful anywhere.”

But for some, Harris’ history as the state’s attorney general and San Francisco’s district attorney before that is a liability. Her record has come under fresh scrutiny as the Black Lives Matter movement, especially in her birthplace of Oakland, has pushed for police and criminal justice reforms.

Sierra McVicar is a Walnut Creek resident and co-founder of the group Bay Area for Bernie. While she hopes progressives in swing states who don’t care for Biden will still vote for him to oust President Trump from the Oval Office, she hasn’t committed to casting a ballot for him in deep blue California where her vote isn’t likely to matter much.  Harris, she said, is a “deterrent,” not a draw.

“I do think it would make it more palatable if we had a vice president who supported Medicare for All and was a progressive woman of color,” McVicar said.

Among the realistic possibilities, she said, Bass fits that bill. But not Harris.

Bass chairs the Congressional Black Caucus. She took a leadership role in crafting the House police reform bill and has pushed to end qualified immunity rules that shield police from lawsuits.

While Harris originally backed Sanders’s Medicare for All plan, she later said she would support allowing private insurers to compete with a government-run system, earning a label from many Sanders backers as a flip-flopper. Biden has criticized Medicare for All as too expensive and unrealistic.

Ultimately, the election will be about turnout. And if there’s a lack of enthusiasm for Biden as the candidate and more focus on beating Trump, a well-timed and thought-out vice presidential announcement could provide that jolt of enthusiasm, said Mindy Romero, director of the Center for Inclusive Democracy in Sacramento. But, she warned, he still needs to be careful.

No matter whom Biden picks, he won’t be able to satisfy every constituency he’s looking to lock in, said Sherry Bebitch Jeffe, a longtime political analyst in the state. He could choose someone fairly progressive, like Elizabeth Warren, but anger African Americans who expect him to select a Black woman. He could pick someone like Harris but upset Sanders supporters in the process. Or he could go for someone like Stacey Abrams, who rose to prominence during a high-profile unsuccessful bid for governor in Georgia, but risk selecting someone without enough experience.

With the coronavirus pandemic raging, civil unrest and the fact that Biden would be 78 by the time he took office, “this is not the time for on-the-job training,” Bebitch Jeffe said. “It’s got to be someone the electorate can trust.”

Political strategist Dan Schnur sees Harris as Biden’s “safest and most conventional choice” for vice president. But that isn’t about whipping up support in California, he said.

And while he acknowledged Harris’ critics have been particularly vocal in recent days, Schnur thinks that might have more to do with the fact that she’s viewed as a frontrunner for the job than with an actual swell of dislike for her.

Some critics have suggested Harris is too eager to ascend to the presidency herself, that she might overshadow Biden. But, Schnur said, Biden will want someone capable.

“Biden saw himself as Barack Obama’s partner,” Schnur said, “and it’s clear he’s looking for someone who can play that same role for him.”