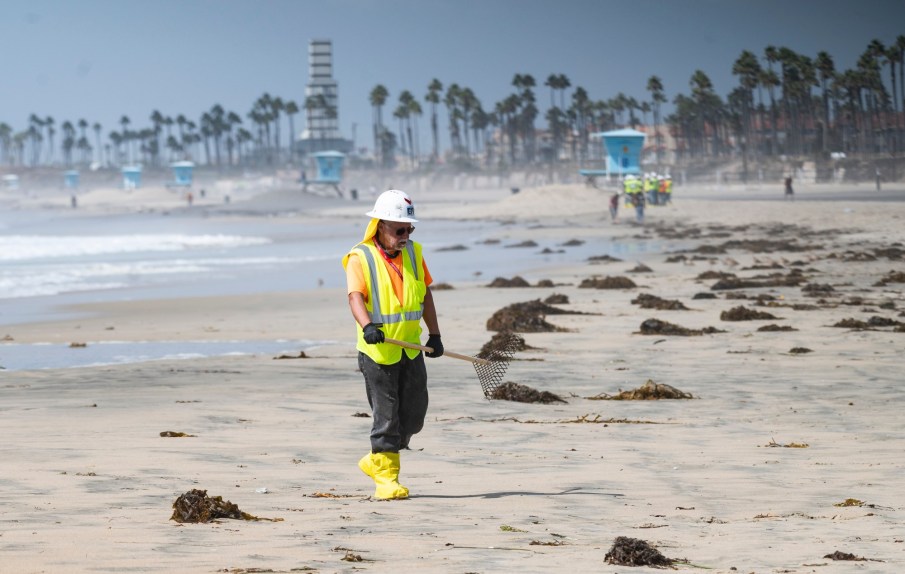 California’s Department of Justice has launched an investigation into what caused the oil spill off the coast of Huntington Beach, with both civil and criminal charges possible, Attorney General Rob Bonta announced during a press conference Monday with U.S. Sen. Alex Padilla.

“We are working in coordination with federal, state and local authorities to determine the cause of spill and what if anything could have been done to prevent or minimize this disaster,” Bonta said as he stood just off the sand of Huntington State Beach, with the outline of the oil platform connected to the damaged pipeline barely visible offshore through the afternoon haze.

“If our laws were violated, we will hold those responsible accountable.”

The news came the same day Huntington Beach reopened to visitors for the first time since a pipeline spill dumped up to 131,000 gallons of oil in the ocean off Orange County on Oct. 1 and 2, killing wildlife and hurting area businesses. City officials said Sunday that water quality tests showed “non-detectable” amounts of oil-associated toxins in ocean water.

Padilla and Bonta said they were encouraged by what they saw during a flyover of the spill area Monday. They said there was no visible oil in the water and praised the cleanup effort, with nearly 1,600 workers on the shoreline.

“But that doesn’t mitigate the horrific, lasting impact of this disaster, a disaster that we know has far-reaching consequences on our fish, on our wildlife, for our communities and for our economy,” Bonta said.

Most of the beach remained empty Monday afternoon, though a few dozen people were hanging out near the Huntington Beach Pier.

Collin Porter, 30, came to Orange County from Salt Lake City on vacation last week with his wife and 4-year-old daughter. They learned about the spill after they arrived and leave for home Tuesday, so they were happy to get one beach day in. But Porter said they were sticking to the sand, unsure about the water.

Such concerns didn’t keep Evan Bourret, 30, of Huntington Beach from surfing Monday. He said he figures rain runoff, nuclear waste from the Fukushima disaster and other things already impact local water quality, saying, “It is what it is.” But Bourret said he does hope we go “all-electric” soon and don’t need to drill for oil here anymore, to prevent future disasters like this from happening.

How this happened, and how to prevent it from happening again, are the big questions local, state and federal regulators are pursuing.

Also on Monday in Huntington Beach, state legislators announced the creation of a special committee to look into the oil spill. Assembly Speaker Anthony Rendon said he has appointed Assemblywoman Cottie Petrie-Norris, D-Laguna Beach, as chairwoman.

“This is an important step to ensure that we get to the bottom of this tragedy, and to ensure that we have oversight and accountability at the state level,” Petrie-Norris said at a press conference next to the Talbert Marsh, where several workers in small aluminum boats were using long-handled rakes and nets to scoop a brown foamy substance out of the water.

Some of the oil flowed into the marsh and was trapped there with containment booms so it could be cleaned up, but what can’t be scooped from the water may have to be washed off rocks and dug out with soil.

Petrie-Norris said the committee also will look at making any necessary changes to regulations for inspecting offshore oil operations and making sure the best technology is being used to detect and respond to future spills.

The committee is expected to start hearings in November.

“It is an outrage that Congress has failed to prevent this damaging oil spill,”  Padilla said, noting oil already has seeped into environmentally sensitive wetlands. “The tradeoff between oil production and environmental harm is simply not one that we should be making any longer.”

Along with working to bring financial relief, Padilla, who’s a member of the Senate Committee on Environment and Public Works, said he’s looking at ways to prevent future disasters.

Padilla recently joined his fellow U.S. senator from California, Dianne Feinstein, D-San Francisco, in calling on Transportation Secretary Pete Buttigieg to investigate the oil spill, including what he called “repeated safety violations of Amplify Energy and Beta Offshore,” the parent company and subsidiary that operate the pipeline. Padilla asked Buttigieg to make results of that investigation public and to commit to clear timelines of safety regulations, such as inspections, shut-off valves and leak-detection systems, in existing pipelines.

Depending on results of those investigations and what caused the spill, Padilla said they would consider specific legislative changes that might help lessen the chances of such disasters from happening again.

The House Natural Resources Committee, which includes local Democratic Reps. Mike Levin of San Juan Capistrano, Katie Porter of Irvine and Alan Lowenthal of Long Beach, on Wednesday will discuss the Offshore Pipeline Safety Act to require new federal regulations for pipeline integrity and safety issues as pipelines are taken offline. The committee also will consider the Offshore Accountability Act of 2021, which would require operators of offshore oil and gas facilities to report failures of critical systems to the Secretary of the Interior.

When asked about reports that there was a delay in reporting the latest spill, Bonta said, “We don’t want to get too far ahead of our investigation,” saying the state will take its time to make sure the process is thorough and gets to the bottom of what happened. He wouldn’t give an estimate for how long the investigation might take.

Bonta said they also can’t yet estimate the cost of the cleanup or the financial impact to businesses.

The only way to stop future spills is to ban all offshore drilling, Padilla said. That’s why he’s a cosponsor with Feinstein of the West Coast Ocean Protection Act, which was reintroduced earlier this year to ban any new oil and gas drilling off the coasts of California, Oregon and Washington. He has called for this bill to be included in the Senate version of the budget reconciliation package.

When asked if he supports trying to end current agreements for oil companies to drill in federal waters, which would likely require significant federal funding to buy out current contracts, Padilla said budget discussions will include “bringing existing production activity to an end as soon as possible.”

As beaches reopen, visitors are encouraged not to touch any tar balls if they’re found. Instead, they should report sightings of the toxic pollutants to tarballreports@wildlife.ca.gov.