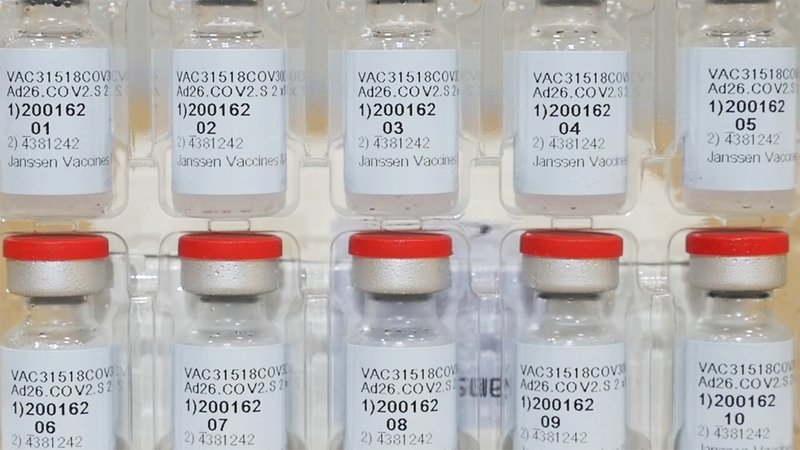 A COVID-19 vaccine produced by Johnson & Johnson — the company best known for producing Band-Aids — is safe and effective, according to a Food and Drug Administration review released Wednesday, paving the way for a third U.S. vaccine.

If approved after a Friday review by the FDA’s Vaccines and Related Biological Products Advisory Committee, the vaccine could be authorized as soon as Saturday. The company plans to begin shipping immediately.

While not quite as effective as existing Pfizer and Moderna vaccines, it has two huge advantages. It’s easy to store and ship. And it works after only one shot.

“It’s not the world’s best at preventing you from becoming infected or developing minor respiratory symptoms,” according to Dr. Warner Greene, professor of medicine at UCSF and the founding and emeritus director of Gladstone Institute of Virology and Immunology. “You may have a runny nose or a mild upper respiratory tract infection.”

“But this vaccine protects you from severe disease — having to go to the hospital and dying. And frankly, that’s what we want from a vaccine. That is fantastic,” he said. “I’d sign up for that type of vaccine any day.”

Here’s what to know about this new vaccine:

Q: How effective is it?

A: In U.S. trials, the Johnson & Johnson vaccine provided complete protection against COVID-19 death. It showed 86% efficacy against severe forms of the disease. The overall efficacy rate in the U.S. was 72% in the United States.

The efficacy rates of Moderna and Pfizer vaccines are higher — both around 95%. But comparing the three vaccines is challenging because of differences in the designs and dosing regimens of the clinical trials, say experts.

Q: Can the new vaccine defend against dangerous variant viruses?

A: There is good news on that front.

The vaccine was tested at the height of the global pandemic. Its effectiveness was not influenced by the high prevalence of a variant in Brazil. In South Africa, with a different variant virus, the vaccine reduced severe or critical COVID-19 by 81.7% starting 28 days after vaccination. It was 64% effective against more moderate disease. In response, last week the South African government switched to J & J’s vaccines, instead of using Novavax or AstraZeneca vaccines.

Because Pfizer and Moderna’s vaccines were tested before the emergence of these troubling new variants, it’s not entirely clear how well they will work. In the lab, however, they showed a decreased ability to neutralize the strain now dominant in South Africa, worrying some researchers.

Q: Is there a plan if it fails to work against a variant?

It’s relatively easy to modify all three vaccines. With the Pfizer and Moderna vaccines, scientists just synthesize a different strand of messenger RNA, said Georgetown University virologist Angela Rasmussen on the “Track the Vax” podcast. It is a little harder to manufacture a different viral vector vaccine, like J&J’s.

“It may be… that people who got vaccinated initially with Johnson & Johnson might be getting a Pfizer or Moderna booster that addresses the variant,” she said.

Q: Are there side effects?

A: Side effects seem milder – and there were no reports of anaphylaxis.

All three vaccines have modest side effects, such as pain at the injection site, fatigue, headache, muscle pain, and joint pain. This doesn’t mean they’re unsafe. Rather, it shows that the immune system is kicking into gear.

Unexpected side effects for the J & J vaccine occurred at the same rate overall among volunteers who received vaccine and placebo — about 0.5%. A few rare conditions appeared more common with the vaccine, such as blood clot-related conditions or tinnitus, a ringing in the ears.

Significantly, no one suffered a severe allergic reaction called anaphylaxis, which is seen in Pfizer and Moderna vaccines.

That means that people who get the J&J vaccine might not have to be monitored for 15 minutes after injection – easing and speeding up clinics.

Q: How does it work?

A: The J&J vaccine uses a harmless virus, called an adenovirus, to carry the genetic code.

The Pfizer and Moderna vaccines are made using messenger RNA, or mRNA, a technology that delivers a bit of genetic code to cells.

In all three vaccines, this code acts like a recipe to make a protein, called a spike. Our body sees this spike protein as an invader and triggers the immune system, producing antibodies and T cells.

If the body later encounters the actual COVID-19 pathogen, it is able to respond faster and more effectively, as immune cells and antibodies specific to the virus are produced rapidly in the body to prevent disease.

Q: What is the advantage to J&J’s approach?

A: It makes it a simple one-dose shot.

The J&J vaccine is the first vaccine to show efficacy given as a single dose. That’s a huge advantage when it comes to vaccinating as many people as possible, especially in rural areas.

“We can set up more mobile units – ‘pop ups’ — that can really help get vaccine into the venues where some of our hard-to-reach populations are,” said Dr. Virginia A. Caine, director of Indiana’s Marion County Public Health Department, at a CDC forum on Wednesday. “This will give us access where we might not have had it before.”

It’s also more convenient to ship and store. It doesn’t need ultra-cold storage, like the Pfizer and Moderna vaccines. Instead, it can be kept at standard refrigerator temperatures for three months. At colder temperatures, it is estimated to remain stable for a very long time: up to two years.

“This means that this is a vaccine that we can bring to people — rather than asking people to come to the vaccine,” said Dr. Nirav D. Shah, director of Maine’s Center for Disease Control and Prevention, at the CDC forum. “That will open up multiple new avenues of vaccination.”

A: True. It was founded in the 1890s to sell disinfectants, bug-killing fumigants and a soap to wash dogs. During the 1910s, its national “Clean Up Week” campaign every March became a tradition we now call “spring cleaning.” In the 1920s, it invented the indispensable Band-Aid, made from a simple strip of surgical tape and a pad of gauze. Its first-aid kits are in homes around the country.

But now it’s focused on harder problems. The company was one of the first to vaccinate its employees during our devastating smallpox outbreak. It mass-produced masks during the 1918-1919 Spanish flu pandemic. It created an Ebola vaccine. In January 2020, it launched a major research effort for a COVID-19 vaccine

Q: When will people get the new vaccine?

A: Due to manufacturing issues, there will only be about 4 million doses of its COVID-19 vaccine available to ship immediately as soon as the vaccine is authorized. Of those, about 2 million will be shipped to states; the other 2 million will go to pharmacies and community health centers.

That’s far below the 12 million doses the company originally promised by the end of February. And it’s a drop in the bucket to protect the estimated 260 million vaccine-eligible Americans.

And more doses are coming. Globally, Johnson and Johnson has far larger dreams, aiming to produce 1 billion doses by the end of 2021.

It has pledged to provide doses to lower income countries beginning this year through COVAX, the initiative led by the Global Alliance for Vaccines and Immunization, the World Health Organization, and others, Johnson & Johnson’s Dr. Richard Nettles told legislators at a subcommittee hearing of the House Committee on Energy and Commerce on Tuesday.

“Johnson & Johnson recognizes the global nature of the pandemic and the need for broad access to COVID-19 vaccines,” he said.

Q: Johnson & Johnson is an iconic American company. Is its vaccine manufactured here?

A: Actually, each dose has multiple passports.

The key first step of vaccine production is now taking place at facilities in three sites: Baltimore, the Netherlands and India. The production of the actual drug substance takes about two months, due to the time needed to grow the biological cells and then purify the active vaccine. The manufacturing of the final drug product takes about five to six weeks to produce, test, and release.

To accelerate production, the company will soon get help from French manufacturer Sanofi. It also plans to open eight other international sites. In a remarkable example of global interconnectivity, a single batch of the vaccine will likely visit multiple countries in its journey from a raw drug to a fi­nished vial for injection.