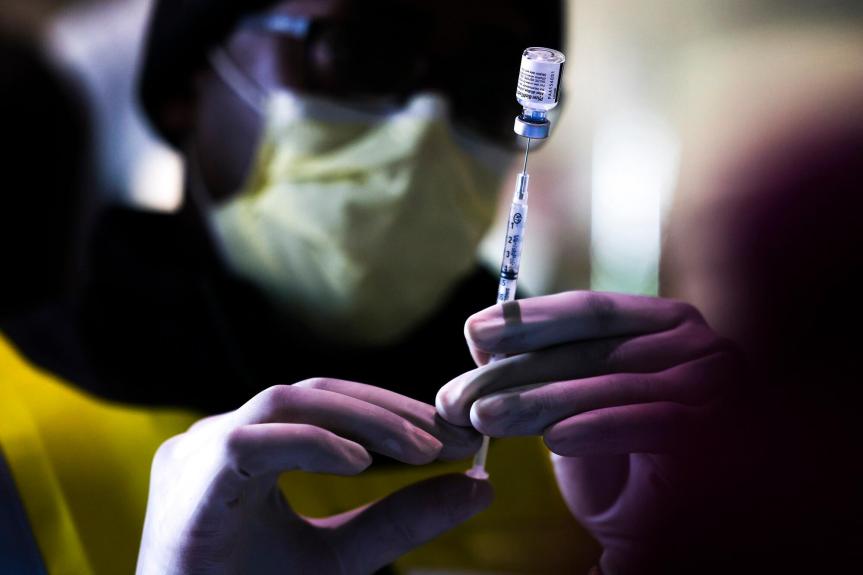 An Indiana couple says they took their family to get their annual flu shot at the local Walgreens, but all of them, including their 4- and 5-year-old, were given a Covid-19 vaccine by mistake. Mistakes like this can happen, but they’re incredibly rare, public health experts say.

Pharmacists and other specialists who give the shots say there are dozens of safeguards built into the system to limit the possibility of human error. And, in the case of Covid-19 vaccines, if someone is getting a second dose, for example, and accidentally gets a Moderna vaccine, when they had Pfizer’s first, that likely won’t cause side effects or other health problems, according to findings from an ongoing National Institutes of Health study.

“A single bad situation like that gets a lot of coverage, but hundreds of millions of doses and second doses have been administered in a very effective, accurate and careful way,” said Jennifer Kertanis, the director of health for the Farmington Valley Health District in Connecticut who has overseen many public vaccination efforts. “While these types of mistakes are really unfortunate, they don’t happen very often and people administering these vaccines are doing everything they can to put steps in place to reduce that potential for human error.”

The CEO of the National Association of County and City Health Officials, Lori Freeman, said vaccine mistakes like this are as “rare as a plane crash, thankfully.”

‘Checking, double-checking and even triple-checking’

It’s unclear what went wrong in the case of the Indiana family.

Joshua and Alexandra Price said they learned about the mistake from the pharmacist who called them about 90 minutes after they received the shots. The couple had already been vaccinated against Covid-19 earlier in the year, and their children aren’t old enough to get a Covid-19 vaccine yet, as they’re only authorized for children 12 and older. The vaccine they received was three times the dose being considered for children’s vaccines. The kids experienced side effects from the shots, the family said, and are currently being treated by a cardiologist.

A Walgreens spokesperson said the company could not comment on a particular case due to privacy concerns, but released a statement that emphasized safety was a “top priority.”

“Our multi-step vaccination procedure includes several safety checks to minimize the chance of human error and we have reviewed this process with our pharmacy staff in order to prevent such occurrences,” a statement from the company said.

It’s those safety steps that vaccine managers said are crucial to protect people who get a vaccine, particularly when more kinds of vaccines are being added to the mix, like Covid-19 boosters and flu shots, and possibly Covid-19 shots for kids that would require a different kind of dosage.

“The system that pharmacies use is very similar to what they use in medication,” said Mitch Rothholz, the head of immunization policy at the American Pharmacists Association. “It’s checking, double-checking and even triple-checking everything.”

Vaccine safety starts with how the product is stored and labeled, Rothholz said. If products look similar, stores will keep the vaccines in different parts of storage.

At mass vaccine clinics with multiple vaccines, people seeking different shots will wait in separate sections. People who need a Moderna shot, for example, will be filtered into one section of the site, another section will be for Pfizer, another for Johnson & Johnson. Each section will be clearly marked with signs.

Often, Freeman said, clinics will provide just one kind of vaccine at a time to avoid any possible confusion.

Freeman said there is a lot of thought and redundancy that goes into giving out a vaccine. At many clinics, people will be asked to pre-register and then when they get to the clinic, a greeter will verify the person’s information. Then there’s registration, and then another check when the person administers the shot.

Some personal responsibility is also involved, the vaccine managers said. A vaccinator can steer that with a conversation as they give someone the vaccine.

Rothholz urged people to bring their vaccine cards with them as an additional check. That way, the vaccinator can reconfirm that the vaccine they are giving the person comes from the same manufacturer if it is a second or third shot.

What happens after a rare mix-up

Communication should happen immediately, and the person who got the wrong vaccine should seek care right away — and follow up to get the vaccine they should have received in the first place.

How much the wrong shot would impact a person’s health depends on a number of factors, Freeman said. If a small child gets a larger Covid-19 vaccine dose meant for an adult, they may feel side effects, for example. If someone is allergic to one of the mRNA vaccines, that could be an issue.

But if someone gets a Moderna vaccine when they were supposed to be getting a Pfizer booster, they are unlikely to notice. There’s no recommendation for now to mix Covid-19 vaccines, but early study suggests no side effects result from mixing vaccine types — especially the Pfizer and Moderna vaccines, which use the same mRNA technology.

Ultimately, it’s always good to talk to a doctor in the unlikely event that a mix-up would happen, she said.

“I think you just want to get it checked out,” Freeman said.

In the case of the Indiana family, Dr. Peter Hotez, dean of the National School of Tropical Medicine at Baylor College of Medicine, said the children should “probably do OK.”

“It is concerning they got a higher dose and they have to be monitored, but they should do really well,” he said. “There is a lot of data out there now in 5-year-olds and older.”

Pediatricians who have been testing Covid-19 vaccines in younger children tried a variety of doses, including full adult doses. And children 12 and up have been receiving the adult dose safely.

As for the parents, getting the Covid-19 vaccine would be like getting a booster shot.

“The big concern there is that it may not be as effective as it would be if they received it after six months,” Hotez said.

Vaccine maker Moderna asked the FDA to authorize a booster that is half the dose of the initial two shots. To prevent mix-ups, it plans to prepare a “Dear Health Care Provider” letter explaining how the different doses will need to be administered. “We recognize that this will require some education and enforcement,” the company told the FDA on Thursday.

From a provider perspective, Rothholz said, he wants to reassure people that even with all the complicated logistics of administering multiple different kinds of vaccines, providers put a lot of thought into the safety systems they use. And with the Covid-19 pandemic, they’ve had a lot of practice refining the vaccination process.

“It’s a lot of moving parts, but we have experience with this,” Rothholz said. The clinic in his community has given 50,000 vaccines without any trouble, he added.