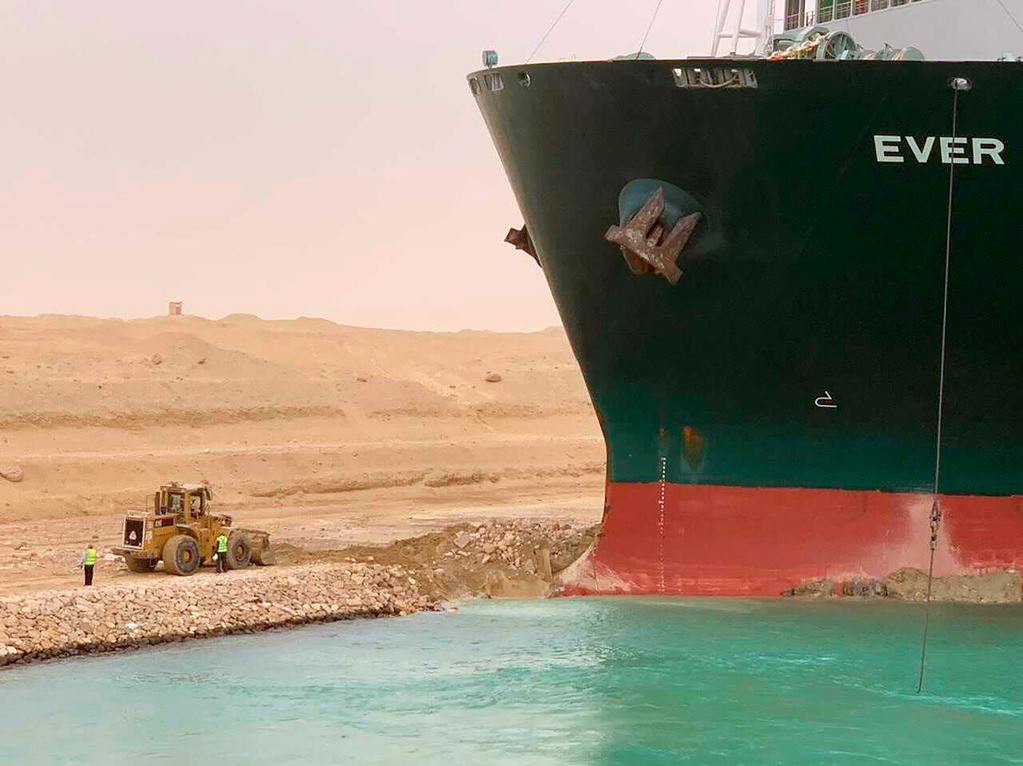 Rescue teams working to dislodge the giant container ship blocking the Suez Canal have failed in another bid to free the boat, according to the vessel’s technical manager.

“Another attempt to re-float the vessel earlier today … was not successful,” Bernhard Schulte Shipmanagement (BSM) said in a statement, adding that more equipment is expected to be brought in to assist further efforts. The US Navy is also planning to send assistance over the weekend.

The Ever Given, a container ship almost as long as the Empire State Building is tall, ran aground in the Egyptian canal on Tuesday after being caught in 40-knot winds and a sandstorm that caused low visibility and poor navigation.

It has blocked one of the world’s busiest and most important waterways, prompting frantic salvage efforts, including the use of two dredgers, nine tug boats and four diggers, and a growing traffic jam at either end of the canal.

“The focus is now on dredging to remove sand and mud from around the port side of the vessel’s bow,” BSM said, adding that a special suction dredger will be used to move 2,000 cubic meters of sand and mud around the ship every hour.

Up to 706,000 cubic feet of sand in the canal need to be removed to free the gigantic container ship, according to the canal authorities.

Dredgers are hard at work removing sand and mud from the bow of the ship — and they will need to move between 530,000 to 706,000 cubic feet of sand in order to reach a depth of 39 to 52 feet, which could allow the ship to float, the Suez Canal Authority (SCA) said on Thursday. That’s approximately eight times the size of an Olympic swimming pool.

The US Navy in the Middle East plans to send an assessment team of dredging experts to the site as soon as Saturday, according to two defense officials.

The move comes after the Egyptian government agreed to accept an offer of help relayed through the US Embassy in Cairo.

“The Biden administration is tracking the situation closely,” a US official told CNN Friday.

“As part of our active dialogue with Egypt, we have offered U.S. assistance to Egyptian authorities to help re-open the canal. We are consulting with our Egyptian partners about how we can best support their efforts.”

The US military often sends assessment teams to disaster situations overseas to offer technical expertise when requested. There is no indication yet of any further assistance beyond the team going to Egypt.

The Ever Given is owned by Japanese shipping company Shoei Kisen KK. The vessel’s owners hope to re-float the ship by Saturday night Japan time (Saturday morning ET), contrary to the belief held by shipping experts that it could take days or even weeks to free the boat.

“The aim is to re-float the container by Saturday night local time,” Toshiaki Fujiwara, the company’s senior managing director, told CNN on Friday.

The crisis may lead to numerous legal claims.

Discussing potential damages claims, Fujiwara said that “the company has not received any claims at this point” adding that “it may take one [to] two or several years to come up with those details.”

Evergreen Marine, a Taiwanese company which operates the ship, has claimed that Shoei Kisen KK bears responsibility for the accident, Fujiwara confirmed.

Shipping experts remain concerned about the situation, with a CEO of a salvage company saying that the ship was “stuck rock solid.”

“Fortunately, the ship is in good shape, undamaged, so that is an important basic condition,” Peter Berdowski, CEO of Boskalis, told Dutch television on Thursday. “But the first impression is also that it is stuck rock solid.”

Boskalis’ sister company Smit Salvage is one of the firms working to free the Ever Given.

The senior canal pilot at the SCA told CNN Wednesday that re-floating the massive vessel is “technically very complicated” and could take days.

A team of expert salvors from Dutch Smit Salvage and Japan’s Nippon Salvage, who worked on several high-profile operations in the past, have been appointed to help the SCA re-float the ship, the charter company Evergreen Marine said in a statement.

But each day that passes is comes at a high cost to companies and countries whose trade has been held up by the gridlock. About 12% of the world trade volume passes through the Suez Canal, and it usually handles about $10 billion a day in cargo.

At least 160 ships carrying vital fuel and cargo are now waiting to pass through the blocked waterway, according to a senior canal pilot at the SCA. Some ships are deciding to divert their journey around Cape Horn to avoid the Suez Canal blockage — but they face an extra 3,800 miles and up to 12 days extra sailing time, according to the International Chamber of Shipping.

A new catamaran from Norway’s ferry and freight company Fjord Line is among the stranded vessels.

“We are anchoring outside Suez and just waiting to pass through canal,” a Fjord Line spokesperson told CNN.

The catamaran was “on its way home to Norway and Denmark. All of sudden it all stopped,” the spokesperson added. Eleven people from the firm are on board.

“It’s a bit boring of course but they are fine,” the spokesperson said. “They have water, they have food. The weather is nice.”

At least 10 ships, including oil and LNG tankers and container ships, have rerouted away from the canal, according to Marine Traffic and data intelligence firm Kpler.

“There are already now multiple ships … bypassing [the route from the Mediterranean into the canal] and are now going south … it is the right point in time to make that decision,” said Lars Jensen, the head of Sea Intelligence Consulting, a firm provides consultancy to the shipping industry.

“So for now, it will appear that the vessels that are waiting in line [in the canal], would simply cross [their] fingers and hope that this will be resolved,” he added.

The situation is expected to worsen over the weekend, with over 100 ships scheduled to join the vessels waiting at the waterway, bringing the total stranded to more than 300 vessels, financial data provider Refinitiv said.

“Not only will the goods aboard the Ever Given be severely delayed on their journey, but the hundreds of other ships are also affected. The damage done to the global supply chain will be significant,” said ICS Secretary General Guy Platten.

Experts worry that if the ship isn’t freed soon, the logjam could impact the oil market, shipping and container rates, leading to a rise in the cost of everyday goods.

“The majority of trade between Asia and Europe still relies on the Suez Canal, and given that vital goods including vital medical equipment and PPE, are moving via these ships we call on the Egyptian authorities do all they can to reopen the canal as soon as possible,” said Platten.

Raphael Bostic, president of the Atlanta Federal Reserve Bank, said Friday that the delays could lead to a temporary spike in the prices of goods.

“If this were to go on for weeks and weeks, I think you could actually see some pretty significant disruptions in goods provision,” Bostic told CNN Business, though he added the blockage is not expected to last that long.

“We may see some temporary spikes, but they will only be temporary,” he added.

“I’m confident we will return to more equilibrium pricing as quickly as possible. I don’t think this is going to be an enduring issue.”

This isn’t the first time the canal, which opened in 1869, has faced a shutdown. It had to close between 1956 to 1957 due to Suez Crisis, also known as the second Arab-Israeli war. It shut down again in 1967 when Israel occupied the Sinai peninsula, and didn’t reopen until 1975.

But the closure now may have a much larger, more disruptive impact than during the last two shutdowns because the level of trade between Europe and Asia has grown substantially in the decades since.

“The size of shipping has become so big that it’s very hard for the Egyptian authorities to, basically, keep up with the growth,” said CNN’s senior international correspondent, Ben Wedeman, on Thursday. “The size of the Suez Canal in the last 50 years, the width of it, has basically doubled and clearly it’s still not big enough.”