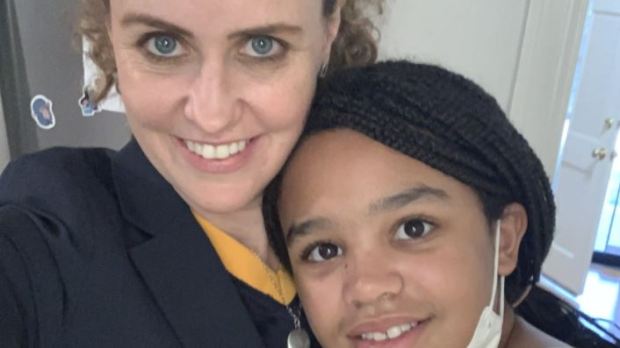 A woman and her 10-year-old daughter were stopped by police at Denver International Airport last month after a flight attendant flagged the duo as suspicious, an assumption the woman said is racist.

Mary MacCarthy, who is white, and her 10-year-old daughter, who is Black, flew from San Jose, California, to Denver on Oct. 22 to be with family after the sudden death of MacCarthy’s older brother the night before. When they arrived in Denver, they were met on the jet bridge by a Southwest Airlines employee and two Denver police officers.

“The officer said, ‘We’re talking to you because you were reported to the pilot for suspicious behavior,’” MacCarthy said. “And it immediately occurred to me what was going on. This is the type of situation that mixed-race families and families of color face all the time while traveling.”

The flight attendant who reported MacCarthy told police she was suspicious because the two were the last to board the plane and because MacCarthy asked other passengers to move so her daughter could sit next to her, according to a copy of a police report obtained by The Denver Post through a records request. The attendant also reported that the pair did not speak during the flight.

MacCarthy said they boarded the plane last because they were assigned the last boarding group and that the passengers on the plane did not have a problem rearranging their seating. MacCarthy said she and her daughter did not speak much during the flight because she was trying to catch up on lost sleep and her daughter was listening to an audiobook.

“The whole thing is based on what I believe to be a racist assumption about a mixed-race family,” MacCarthy said.

Mixed-race families have made multiple public complaints about being questioned as human trafficking suspects while flying in the United States.

A white Phoenix man flying home from vacation with his family, including his adopted Chinese daughter, was stopped by police after a Southwest flight attendant reported him as suspicious. A Black woman from Colorado flying with her adopted white sister was stopped by police in Dallas after a passenger on a Frontier Airlines flight reported her to airline staff as a potential trafficker.

Cindy McCain, widow of Sen. John McCain, in 2019 apologized after incorrectly claiming she stopped a human trafficking crime when she reported a woman traveling with a toddler of a different ethnicity at the Phoenix airport, saying the pair “looked odd” and that “something didn’t click with me.” Phoenix police later confirmed McCain reported a woman but said they investigated and there was no evidence of a crime.

In August, a Southern California woman was arrested after she publicly alleged a Black teenager she saw at Costco was being abused by her White parents.

MacCarthy wants an apology from Southwest for its employee’s racist assumption about her and her daughter.

The police report on the incident also angered MacCarthy because the officers wrote MacCarthy “did not want to give any information.” But MacCarthy gave an explanation of why she was traveling and gave the officers her identification, she said. A video she recorded of part of the interaction shows her explaining her travel.

Southwest’s media team declined to answer specific questions about the incident, including who reported MacCarthy and her daughter, the basis of that person’s suspicions and what signs Southwest employees are trained to look for as evidence of trafficking.

“Southwest regrets that this family reports anything less than a positive experience while traveling with us,” the company said in an emailed statement. “The customer’s report has been shared with Southwest’s Customer Relations Team, and they will be following up with the customer directly.”

Southwest Airlines in 2019 announced it would provide online training to all of its employees on how to identify human trafficking and what steps to take if trafficking is suspected. Public-facing employees, like pilots and flight attendants, attend additional training.

The entire incident at the airport made an already difficult day even harder for Moira, MacCarthy said.

“She just kind of clams up when we talk about it,” MacCarthy said.