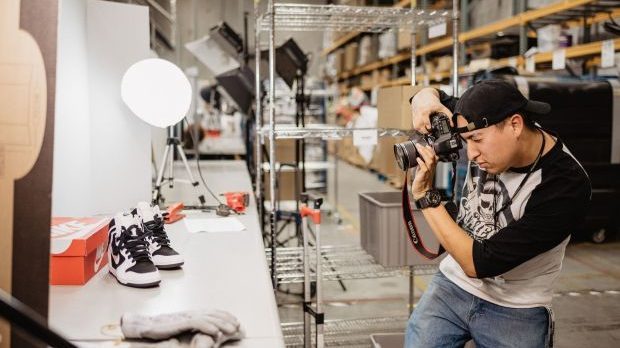 Launched in 1999, shopgoodwill.com was designed as another source of funding to support the Santa Ana-based organization’s mission to help people acquire job skills and find lasting employment.

More than 20 years later, the site plays a significant role in its revenue generation.

“This is a best-kept secret,” said Nicole Suydam, president and CEO of Goodwill of Orange County, which owns and operates the site. “The remarkable part is that half of that $1 billion was generated in the last three years alone.”

Suydam said 129 Goodwill organizations throughout the country list and sell items on the site.

Goodwill sellers have the option of listing items at a fixed price, she said, but the auctions generate more value.

“It helps the market set the price,” she said. “Sometimes some really valuable things go through the site. It becomes competitive and the winning bid gets it.”

The most popular items

The average price for a single item sold last year on shopgoodwill.com was $35.50, considerably more than the $15 to $20 dollars customers typically spend for a few items at Goodwill stores.

Jewelry is the most popular online item, followed by clothing, computers, electronics, collectibles, toys and games. More than 90% of an item’s sale price goes back to its local Goodwill community to support the specific needs of job seekers there, officials said.

The nonprofit’s mission is to serve and support people facing barriers to employment. That includes people with disabilities, those with criminal records and others dealing with homelessness or drug addiction, among other challenges.

“These are people who in many cases have been marginalized,” Suydam said.

Goodwill of Orange County has 24 stores and employs about 1,200 workers through all of its services. The nonprofit maintains a 36,000-square-foot e-commerce warehouse on South Yale Street in Santa Ana, California.

Goodwill, like other retailers, has taken a hit during the COVID-19 pandemic as a result of the on-again, off-again closures of non-essential businesses.

“It’s been a huge challenge,” Suydam said. “We had to temporarily close our brick-and-mortar stores in Orange County. We thought it would just be for a few weeks, although it was longer. But we realized we could operate the e-commerce site safely, so we were able to get back up and running.”

Goodwill operates nearly 3,000 stores throughout the U.S. and Canada, and the organization had approximately 141,000 employees at the end of 2020.

Suydam assumed the top role at Goodwill of Orange County in October 2018, replacing CEO Frank Talarico Jr. who left in April of that year.

She had served as Goodwill’s vice president of development for nearly a decade before moving to Second Harvest Food Bank of Orange County in 2012.

Goodwill of Orange County’s most recent annual report shows the nonprofit generated more than $142 million in public support and revenue in 2019, up from $132.5 million the previous year.

Suydam tied the success of shopgoodwill.com to changing consumer habits.

“There is a lot more interest in re-commerce and online thrift from the younger generation,” she said. “They are interested in shopping with a purpose and knowing it will help change lives.”