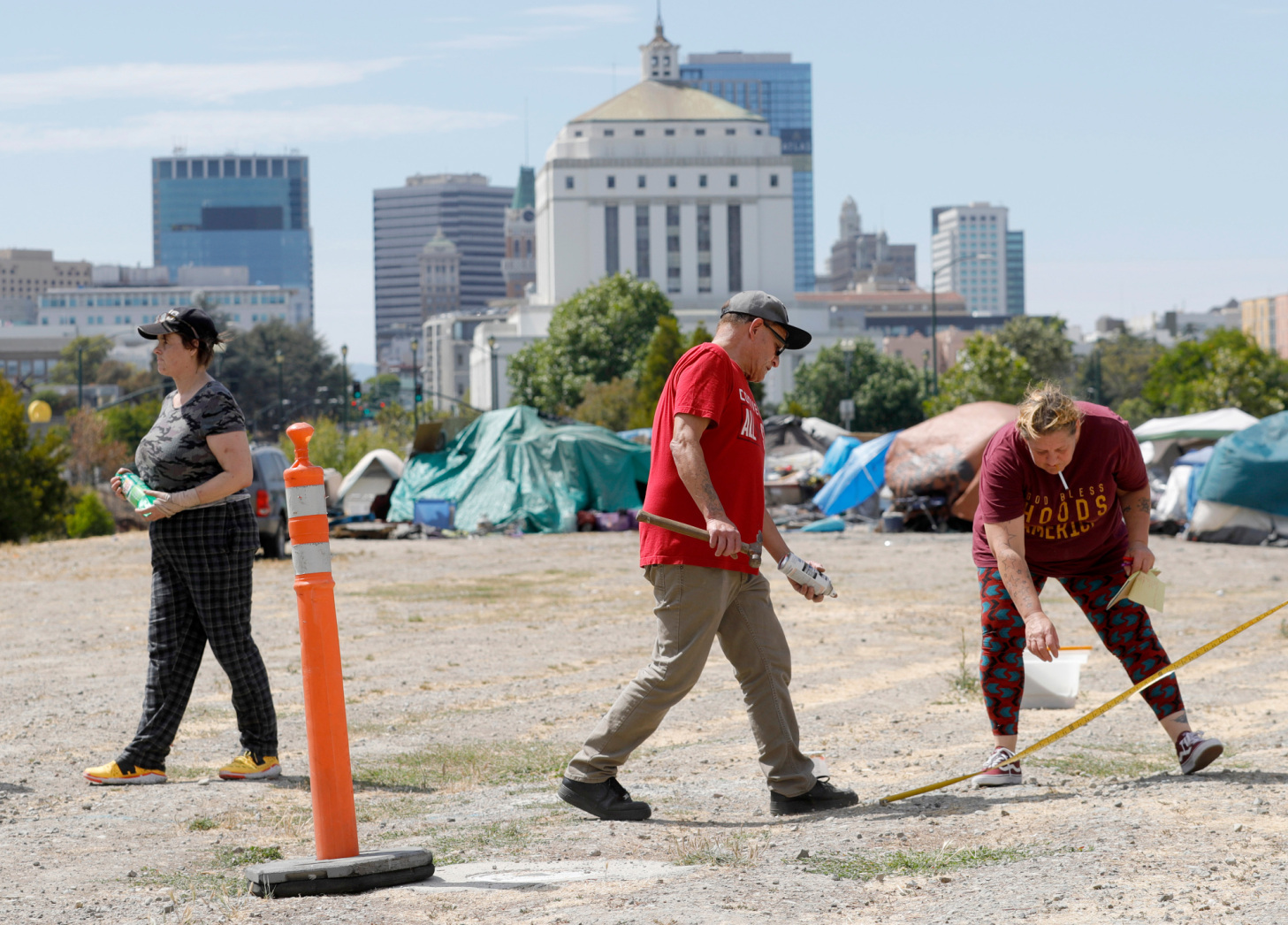 Oakland is the first major Bay Area city to experiment with “co-governed” shelter programs, where residents work with the city and nonprofit service providers to design the setup, write the rules and even help run the sites. The City Council recently approved two locations to test the concept — one near Lake Merritt and one in West Oakland — where occupants will sleep in small, modular cabins while awaiting permanent housing.

It’s a markedly different approach than the traditional top-down method, where residents are told where, how and with whom to live — often chafing under strict curfews and assigned roommates.

“The main goal is the residents are going to be central to controlling their space — to making it beautiful, to the kind of conduct they would want to live around,” said Justin Tombolesi, a constituent liaison for Councilwoman Carroll Fife.

Mike Dominguez, who is slated to move into the Lake Merritt site in the next few months, is cautiously optimistic about the co-governed model. But he’s waiting to see how much control the city actually gives to the unhoused residents.

“It definitely has potential,” he said.

Similar programs have succeeded in Washington, Oregon and Colorado, and Bay Area activists for years have been urging local officials to give them a try. In the meantime, some homeless camps are organizing themselves, often with help from grassroots groups such as Safe Organized Spaces Richmond, which pays unhoused people stipends to clean or provide security for their encampments.

But local cities mostly have not embraced the co-governed model, which can be logistically tricky to carry out — it requires building consensus among unhoused people who may have differing viewpoints and unstable lives that prevent them from attending regular meetings. San Francisco avoided the model when setting up several sanctioned tent encampments during the pandemic. And earlier this year, San Jose rejected the idea of sanctioned encampments altogether, citing a lack of funding and staff. Instead, San Jose has set up several shelter sites with modular units, all run by nonprofits.

Oakland’s co-governed sites will house residents temporarily in “Pallet Shelters” — rudimentary units manufactured by a company in Washington that are one step up from a tent. One of the locations will house 40 people on a vacant Caltrans lot at Peralta and 3rd streets in West Oakland, where residents will have bathrooms.

People should be moving in by Labor Day, Tombolesi said. If it works, he hopes it will inspire more co-governed sites.

The second Oakland program will house about 75 people in Pallet Shelters on a vacant lot at E 12th St., a block from Lake Merritt — 15 of whom will test the co-governed model. Developer UrbanCore for years has been planning to build apartments there, but the project has been bogged down by delays, and the lot remains vacant. If the UrbanCore project eventually moves forward, the Pallet Shelter community would have to leave.

Co-governed sites have been a long time coming to the East Bay. The Oakland City Council set aside $600,000 in 2019 to test the idea, commissioned a report last year and set a goal of opening the city’s first co-governed site by February. After failing to meet that goal, council members approved the Lake Merritt site in June. They granted final approval to the West Oakland site this week.

Combined, the two sites will cost more than $5 million. Of that, $3.9 million comes from state funds leftover from projects that were closed or delayed in the last fiscal year, and $1.2 million is from Measure Q, a tax Oakland voters passed last year to fund homelessness interventions.

At the site near Lake Merritt, about 15 spots will go to people who were displaced when the city shut down an encampment at Union Point Park. When city workers showed up at the park with bulldozers back in March, residents put up barricades and refused to leave— forcing the city to negotiate with them. After several rounds of back-and-forth talks, the city agreed to work with the occupants to set up a co-governed site.

Since then, the residents — who for now are living in hotel rooms paid for by the city — have been meeting once a week to hash out plans for the co-governed site. They’re working with Tiny Logic, a startup specializing in tiny homes and RV communities.

On Tuesday, several future residents took a tour of the site, sticking metal stakes in the ground to mark where the Pallet Shelters and the security fence will go.

“This is my house, right here,” 51-year-old Lucy Brum said, standing in the middle of an eight-foot by eight-foot square.

Brum, who lived at Union Point for seven years before the camp was dismantled, is hopeful the co-governed site will work.

“I have faith in it,” she said, “because this is our last resort.”

But there already have been instances where residents feel their voices weren’t heard by the city. Several people say the 64-square-foot sleeping cabins the city ordered are too small, said Tiny Logic founder Adam Garrett-Clark. And the city so far has resisted their requests to install a sewer line, instead opting for portable bathrooms, he said.