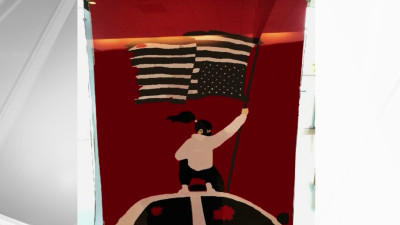 A controversial painting displayed at Mineta San Jose International Airport is creating quite a stir.

The artwork was on display at the airport’s Terminal B and it showed a demonstrator on top of a police car. The windows of the car are cracked – and some say it looks like two blood splatters.

It has since been removed but not before stirring up a lot of emotion.

“To me, when I saw the display, it demonstrated violence against law enforcement. And that doesn’t have a place in a city facility,” said a retired police officer who did not want to be identified.

The San Jose Police Union declined to comment on camera but said the painting angered and hurt them.

“Attacks on police officers that are sitting in their vehicles. That’s what I got from it,” said the retired officer.

The artwork was part of the city’s Public Art Program where artists submitted their work reflecting on the global pandemic and this difficult time.

“You always want to create something that hits home with people,” said artist Eric Bui.

Bui was commissioned by the city to paint the controversial artwork titled “Holding the Moment.” He said he wanted to express the pain many were feeling after the George Floyd murder.

When asked if the painting was not anti-police, but anti-police brutality, Bui said, “Exactly. They have a roll in or society with respect to police officers. I believe they do a very tough job and go out and risk their lives to protect.”

On Thursday, the display case was empty as the art was removed by the city, which issued the following statement:

“The city has heard concerns from airport employees, the police officers association, and members of the public that one of the artworks exhibited in a public facility could be seen to encourage violence against police.“