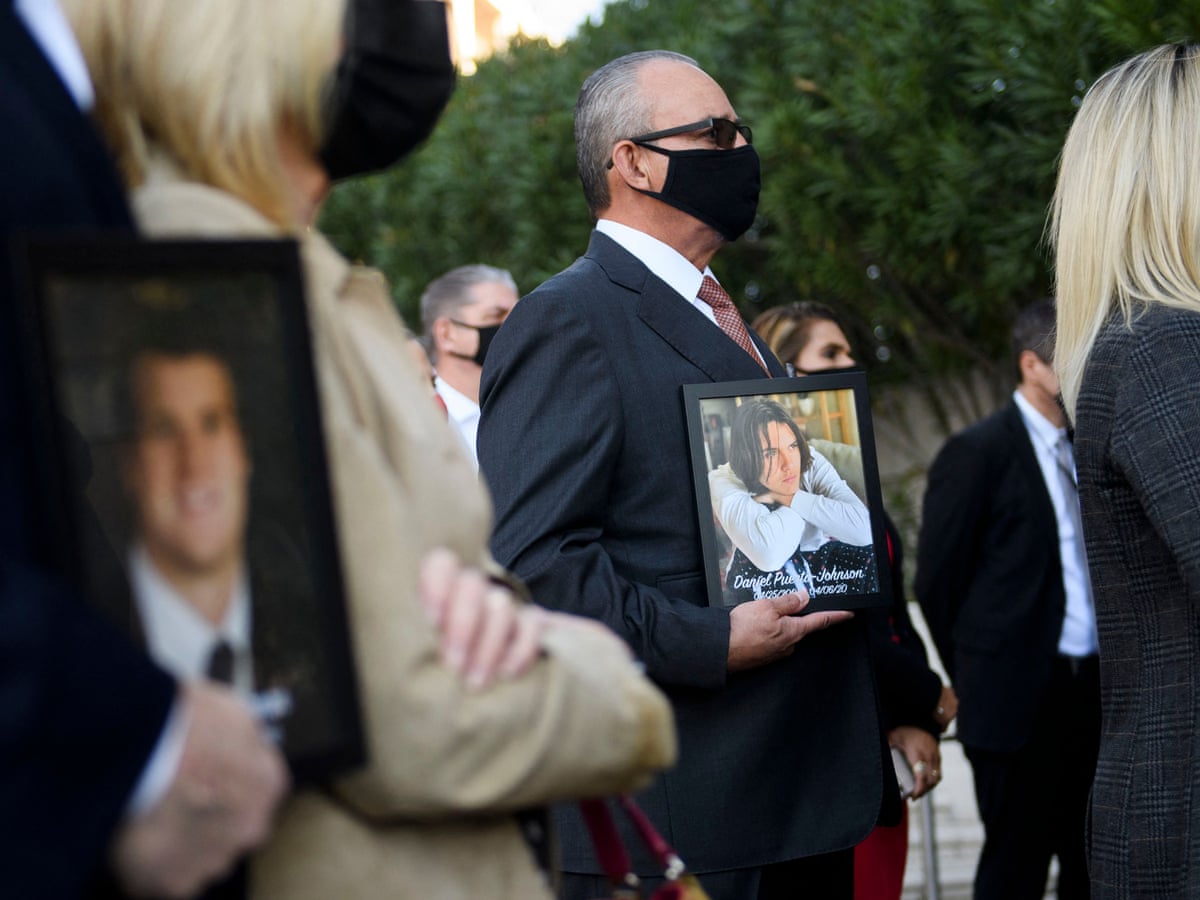 Federal prosecutors say it was posted by Tobin Oliver Wood of Costa Mesa, who allegedly gave the drugs to a San Clemente man, who then died of fentanyl poisoning.

Wood, who has pleaded not guilty to criminal charges, is one of dozens prosecuted by federal officials for allegedly hawking deadly fakes masquerading as bona fide prescription pills on platforms like Snapchat, Instagram and Craigslist.

With drug-related deaths in the United States smashing the grim 100,000 mark in a single year — think of that as 274 people dying every day, or 11 dying every hour, or one dying every five minutes — federal and state authorities are urgently trying to stem the death toll.

Wood was charged not with murder, but with “distributing narcotics resulting in death,” which carries a penalty of 20 years to life. It’s less cumbersome to prove than murder because it doesn’t require prosecutors to wrestle with intent to kill, an integral part of a murder charge.

But local prosecutors in Orange, Riverside and San Bernardino counties don’t have that option. Instead, they’re trying something new: warning convicted dealers that their crimes can end in death, and that murder charges loom if future drug deals turn deadly.

It may be a heavy lift. To avoid hearing the warning, a defendant recently resorted to song, humming loudly in Orange County Superior Court as the prosecutor spoke. That didn’t go over well with the judge, who canceled the defendant’s negotiated plea deal.

The battle against fentanyl — a cheap synthetic opioid that’s 50 to 100 times more powerful than morphine — is being fought on this and other fronts:

-Parents who’ve lost children to the drug will take to the streets outside Snapchat’s Santa Monica headquarters on Friday, Jan. 21, demanding that the platform do more to rid itself of dealers who peddle deadly wares online.

-Snapchat unveiled its latest efforts to block dealing on its platform, expanding artificial intelligence and nonprofit partnerships aimed to educate folks about fentanyl’s dangers and steer them toward help.

-And lawmakers in Sacramento are eyeing a state law that would work like the federal one.

“As a mom, I am terrified, I am so terrified about this poison and how it’s becoming way too common and killing way too many of our kids,” said Assemblywoman Cottie Petrie-Norris, D-Laguna Beach.

“We absolutely need to arm our prosecutors and law enforcement with as many tools as possible to fight this and protect our communities. I do think that California should have a statute for this sort of crime — distributing narcotics resulting in death, and I have started working with legislative counsel on a proposal.”

Over in the state Senate, Sen. Pat Bates, R-Laguna Niguel, is working toward the same end.

“We plan to do a bill that mirrors the federal law,” said Bates, whose bills to stiffen penalties on fentanyl dealers have received the cold shoulder in Sacramento. “Rat poison is illegal because it can kill mountain lions — but we can’t come down harder on fentanyl for killing people?”

In 2018, when drug-related deaths started spiking, the U.S. Attorney’s Office partnered with the U.S. Drug Enforcement Administration to figure out how to respond.

“We started by reviewing many of the overdose deaths in Los Angeles County — and then moved to the other counties in our district — to identify the drug dealers who provided the fatal narcotics,” said Thom Mrozek, spokesman for the U.S. Attorney’s Office, by email. “As a result of this project, we have now charged approximately 28 suspected drug dealers with distributing narcotics resulting in death. Most of these cases involve fentanyl.”

The sentences are serious. On Jan. 7, Edwin Oliva of Montebello was sentenced to 33 years in federal prison for providing a lethal dose of fentanyl, purporting to be cocaine, to a woman who then stopped breathing. In the nearly six hours between when he realized she had stopped breathing and when he called 911, he cleaned his apartment and removed evidence, prosecutors said. He also pleaded guilty to one count of possession with intent to distribute heroin.

That’s the longest sentence federal officials have seen imposed, with most falling in the range of 15 to 25 years in federal prison, Mrozek said.

DEA Special Agent in Charge Bill Bodner said the feds don’t use the “distribution resulting in death” charge because it’s easier to prove, but because there’s really no mechanism to bring federal murder charges in these cases. To prosecute a federal murder case, there must be a specific federal jurisdiction, such as the murder of a federal employee, or in a place under federal control, Mrozek said.

Federal authorities are pleased to see any and all efforts on this front from state and local officials.

“Fentanyl has become the primary driver of the ongoing opioid crisis across the nation, with this drug now being now involved in more overdose deaths than any other illicit drug,” Mrozek said. “This is a major public health crisis, and we are pleased to see authorities across the nation responding to this issue so we can save lives and bring to justice those responsible for distributing lethal doses of narcotics.”

Thirty years ago, Bodner noted, heroin was the opiate on the streets. The “bars to entry” for using it were very high: You had to know where to find it, often in dangerous parts of town, and it had to be injected intravenously, which was a bridge too far for many.

In contrast, today’s opiates come in polite pill form, purporting to be real prescription medication, he said. They can be taken with a sip of water. They can be ordered from the comfort of home on any number of online platforms, and they can be delivered right to your front door.

But these street drugs are not what they claim to be, Bodner said. Everything contains fentanyl.

“That’s what’s killing people today — deception,” he said. “Calling them overdoses isn’t really right – that implies you know what you’re taking and you take too much. Here, you’re being deceived into thinking you’re taking prescription Oxy or Xanax. But it’s fentanyl.

“Deception is why we’re seeing the spike in deaths. The amazing thing is, it could be as little as one pill.”

Heartbroken parents know that all too well.

Alexander Neville, 14, of Aliso Viejo, died after buying a pill on Snapchat that purported to be oxycodone in 2020. His family formed the Alexander Neville Foundation so other middle and high school kids would understand the deadly danger of fentanyl in street drugs, and that it takes only one pill to kill.

The social media giants aren’t doing enough to combat dealing on their platforms, parents maintain. The Alexander Neville Foundation and Victims of Illicit Drugs are organizing a protest at 11:30 a.m. Friday, Jan. 21, at Santa Monica’s Clover Park, 2600 Ocean Ave. Participants will then walk to Snapchat headquarters to make their case.

The groups’ request is specific: That Snapchat convene a nine-member oversight committee of outside experts in law enforcement, public health and safety, and parents who have lost children to work with Snapchat on policies, procedures and enforcement techniques to end the abuse of the platform.

“Every time we bring up an outside audit, it goes unanswered,” said Amy Neville, Alexander’s mother.

A spokesperson for Snapchat expressed sympathy in an emailed statement.

“The fentanyl epidemic has devastated the lives of too many Americans and our hearts go out to the families who have suffered unimaginable losses,” it said. “We share their outrage over how drug dealers have abused Snapchat’s services and are working tirelessly to eradicate them from our platform.”

The company is constantly improving its work on this front and has made enormous strides, it said.  When users type a drug name into the search bar, they’ll get content about the dangers of fentanyl and how to get help. It has an in-app series dedicated to the fentanyl epidemic, done by its news show Good Luck America. PSAs were viewed more than 260 million times last year, and it has partnered with two more nonprofits to provide content.

Neville is unimpressed. “Until they let an independent third party verify what they’re doing, it’s just words,” she said. “We can’t trust Snapchat at this point.”

She’s pleased that lawmakers and district attorneys are paying attention to the problem, but is under no illusion that putting dealers behind bars will eliminate it. “There’s no shortage of drug dealers, and people with drug-seeking behavior are still going to go out and find them,” she said. “We need to work on prevention, awareness and education. But there does need to be accountability.”