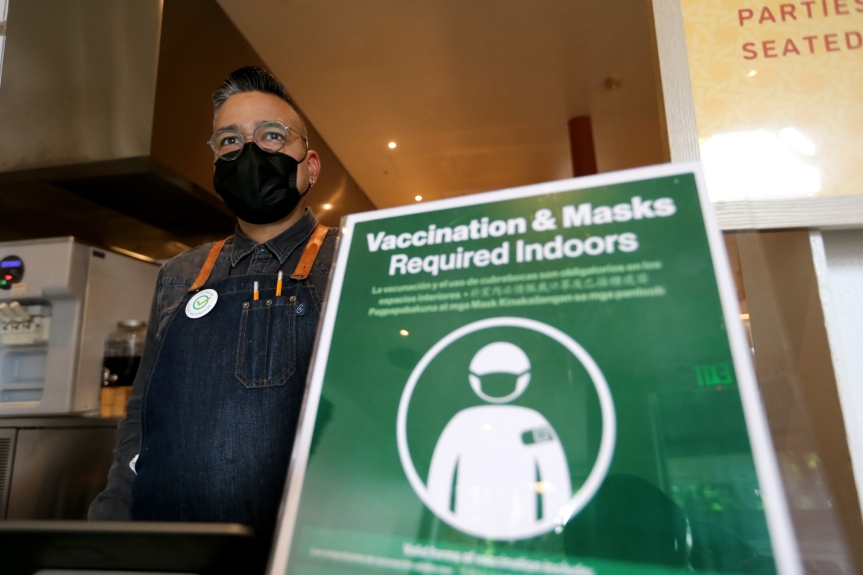 With COVID-19 infection rates easing after a summer surge, Bay Area health officers are poised to announce plans Thursday for an eventual end to the region’s indoor masking mandate.

But when masks can come off is still uncertain. Health officials are finalizing criteria that counties would have to meet to lift the restrictions. As in the past, the new threshold will likely include case rates, vaccination rates and hospitalizations, officials said.

“Our plan is to develop a set of metrics we all share that are common across the region as to when to lift indoor masking,” Santa Clara County Health Officer Dr. Sara Cody told supervisors this week.

Health officials across the country are struggling to chart a path out of the pandemic after the optimism that followed COVID-19 vaccines was upended by the virus’ highly contagious delta variant and a resurgence of infections.

The U.S. Centers for Disease Control and Prevention in May said vaccinated people no longer needed to wear masks in most indoor public places, with exceptions for schools, public transportation and health care and correctional facilities. In late July, the CDC walked that back a bit, advising that even the vaccinated should wear masks indoors in places where COVID-19 rates are substantial or high.

Most Bay Area county health officers restored the indoor mask order Aug. 2, even though the region achieved some of the highest vaccination rates in the nation. In Alameda, Contra Costa, Marin, Santa Clara, San Francisco and San Mateo, more than 80% of eligible residents ages 12 or older are fully vaccinated.

As of Tuesday, every Bay Area county except for Solano requires everyone — regardless of vaccination status — to wear masks in all indoor settings.

But as case rates subside again, health officials are hoping to give people a sense there’s an end in sight.

“That way, for the public, it’s not, ‘Gee, when is this going to end?’ but ‘It’s going to end when we achieve this goal,’ ” Contra Costa County Supervisor John Gioia said.

Some counties will get there sooner than others. How that will play out depends on the new metric, with details expected Thursday. Gioia said Contra Costa County will post a public tracker on its COVID-19 dashboard to show the county’s progress toward lifting the mask mandate.

Even when his county lifts its mask mandate, Ori Tzvieli, the chief medical officer of Contra Costa County, said that he would still recommend that people mask up indoors.

Health officials remain mindful of California’s deadly winter case spike a year ago that began accelerating in November following the relaxation of restrictions in September and October.

“You have to be pretty careful about it,” said Dr. George Rutherford, an epidemiology professor at the University of California-San Francisco. “Our experience last year was the winter surge started the last week of October. On the one hand, we have a lot of people vaccinated now. On the other hand, you’ve got colder weather, people coming indoors, larger indoor events, which could tip the balance in the other direction.”

Rutherford said it would make sense for the counties to more or less follow the CDC’s mask guidance, which is based on local case rates and positive test results. But it also would help to factor in hospital capacity and vaccination rates.

The Bay Area officers’ anticipated announcement comes just about a week after Santa Cruz County rescinded its indoor mask mandate issued Aug. 19. But just as the county trumpeted the end of its mask order Sept. 29 based on reaching the CDC’s “moderate” virus transmission rate, the CDC’s data tracker bumped Santa Cruz County back up to the “substantial” level where it remains.

After a Cal State Monterey Bay professor pointed that out on Twitter, Santa Cruz County replied that it still wouldn’t reinstate the mask order.

Infection rates remain significant throughout the state and country. California and Connecticut are the only two states the CDC lists as not having “high” case and positive test rates, but their rates are still listed as “substantial.”

And among California’s 58 counties, only a dozen have dropped from the high to substantial rates, including San Francisco, San Mateo, Santa Cruz, Santa Clara, Alameda, Contra Costa, Marin and Sonoma, according to the CDC.

Under the color-coded reopening plan California retired in June, which used different metrics than the CDC, the Bay Area’s most populous counties — Santa Clara, Alameda, Contra Costa, San Francisco and San Mateo — would be in the second-highest red tier.

Dr. Monica Gandhi, an infectious disease specialist at UCSF, says metrics like the CDC’s and the old state system are flawed. Case rates are no longer a good gauge of the virus’ impact with so many now vaccinated or with immunity from past infection, and the percentage of positive tests are skewed by who is being tested and how often. She favors a hospitalization metric.

But in any case, Gandhi said conveying a clear roadmap toward lifting restrictions is important.

“Specifying metrics and objective criteria for when mask mandates can be lifted increases trust in public health officers and agencies,” Gandhi said. “The public has been frustrated by the lack of clear metrics for mask mandates, which it sounds like the Bay Area health officers will finally put into place tomorrow.”

Many in the Bay Area aren’t in a hurry to ditch their masks.

“I’ll keep wearing one out of an abundance of caution,” said Jack Fuis, 77, of La Honda, getting his haircut at Sam’s Barber Styling Shop in Palo Alto, where barber My Vo said he too would continue masking up.

Esther Lugo Torres, owner of the Au Natural Skin Rejuvenating Center in Oakland, has no plans to do away with the requirement for clients and staff.