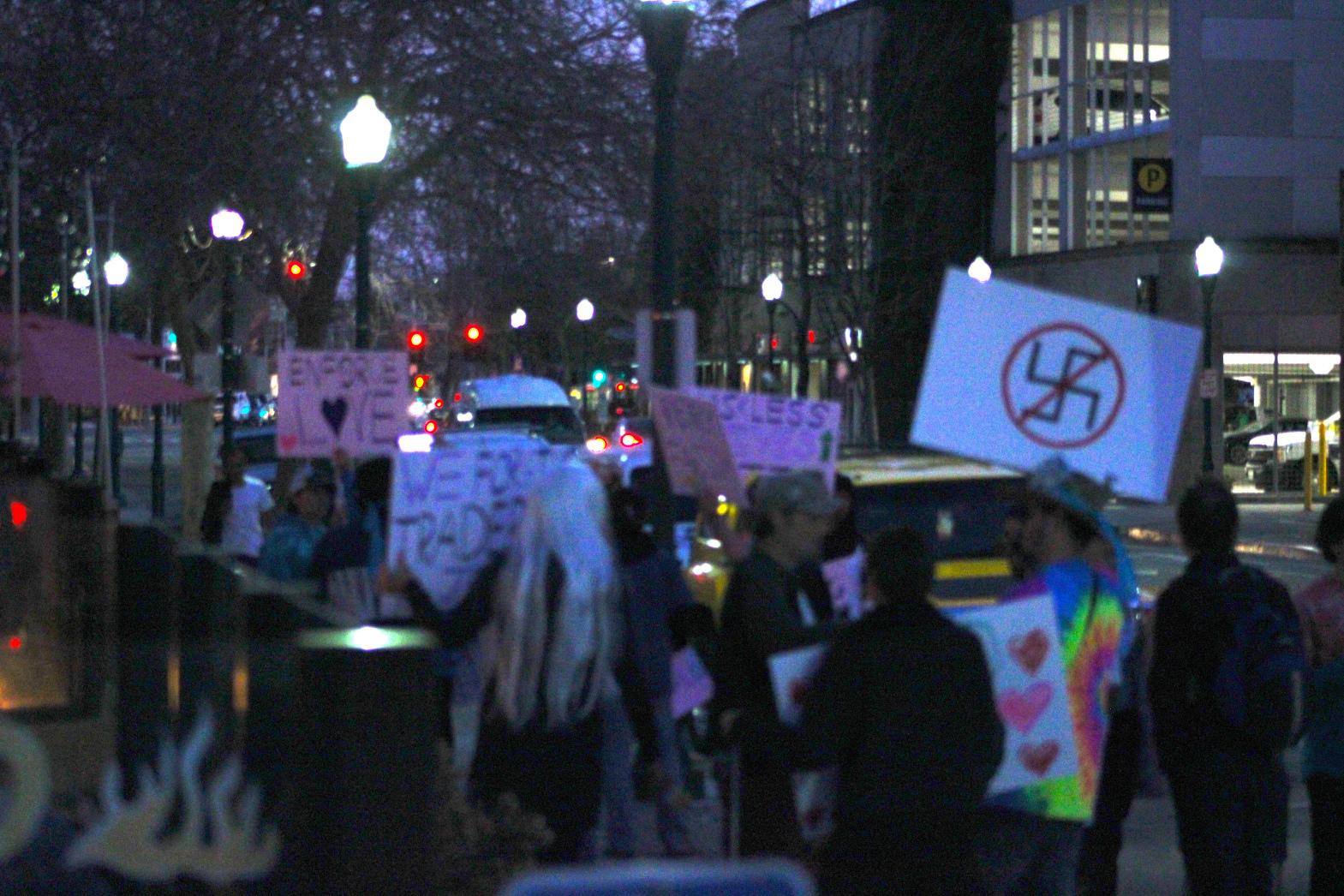 Anti-mask protesters returned to the Trader Joe’s in downtown Santa Cruz on Sunday but did not gain access to the store this time.

The group began at the corner of Laurel Street and Pacific Avenue in front of Asti, a restaurant that features outdoor dining booths on Pacific Avenue, south of downtown. Armed with picket signs, the group marched into the downtown sector.

Signs the protesters were wielding made references to loving one’s neighbor, breathing air freely, and stated, “Maskless Lives Matter.” One sign showed symbols of a circle-slash over a swastika.

The choice of symbolism on the signs is in line with National Maskless Day propaganda. Fliers around the city, which referred to the day as Freedom Day, urged people to walk “into a Nazi store without a mask and share the pictures and videos.”

The group stopped again at Trader Joe’s in a return adventure from the Valentine’s Day excursion. The maskless protesters are also known for an anti-mask demonstration at the downtown farmers market and for offering free hugs on multiple occasions on West Cliff Drive near the Santa Cruz Surfing Museum.

At Sunday’s demonstration, the protesters attempted to go inside the grocery store, but were quickly thwarted. A line of Trader Joe’s employees formed at the front of the store to impede the protesters from entering the market. Employees continued to allow masked patrons to shop inside.

The group heckled shoppers as the left the grocery store. One protester got in a mocking match with another shopper in which she asked if the shopper was wearing a jockstrap on her face.

Part of the group moved around the corner to protest in front of Woodstock’s Pizza. They preached their beliefs to patrons dining on the outdoor patio before they continued their march downtown back to where they started.

During the previous event, the anti-mask protesters recorded themselves entering the grocery store grabbing food and leaving cash at the register after employees asked them repeatedly to leave and refused them service.

Trader Joe’s did not respond to phone calls from the Sentinel Sunday.

Mask mandates within the county already exist and allow police, as well as other city employees, to issue citations for failure to comply to the order. City and county laws make failure to comply a $100 fine for the first offense, followed by $200 and eventual $500 fines for later offenses.

“Officers have been instructed that there is zero tolerance for this type of behavior,” said Santa Cruz Police Chief Andy Mills last week. “In terms of public health, this is unacceptable behavior in our community.”

Police were on scene but were not involved in the incident. One officer on scene called the event a demonstration but did not offer more information.

Interactions between the protesters and police appeared to be positive without officers ever stepping out of their squad cars. No citations or arrests were made.