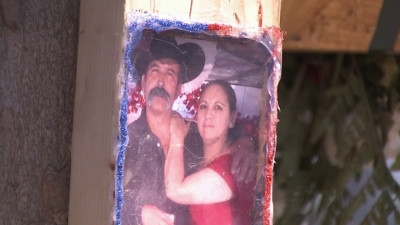 Three children in San Jose are trying to cope with an unimaginable loss. Their parents were killed Sunday by a suspected reckless driver.

Galdino Limon and Lourdes Garcia were on their way to a laundromat when the driver of a truck ran a red light and struck the family car, police said.

Limon and Garcia leave behind two young girls — a fourth-grader at Russo/McEntee Academy and a sixth-grader at William Sheppard Middle School — and a 19-year-old son.

The Alum Rock Union School District is providing counseling for the girls and their brother.

“I’m still in shock,” Superintendent Hilaria Bauer said. “And usually, I have a lot of things to say, but in this moment, we are speechless.”

The Flores family, the victims’ neighbors, stopped by the scene Tuesday to pay their respects.

A witness told NBC Bay Area that the driver was driving recklessly before crashing into the victims. The witness said the driver ran out of the truck to help and started crying when they realized how serious it was. The driver could face vehicular manslaughter charges.