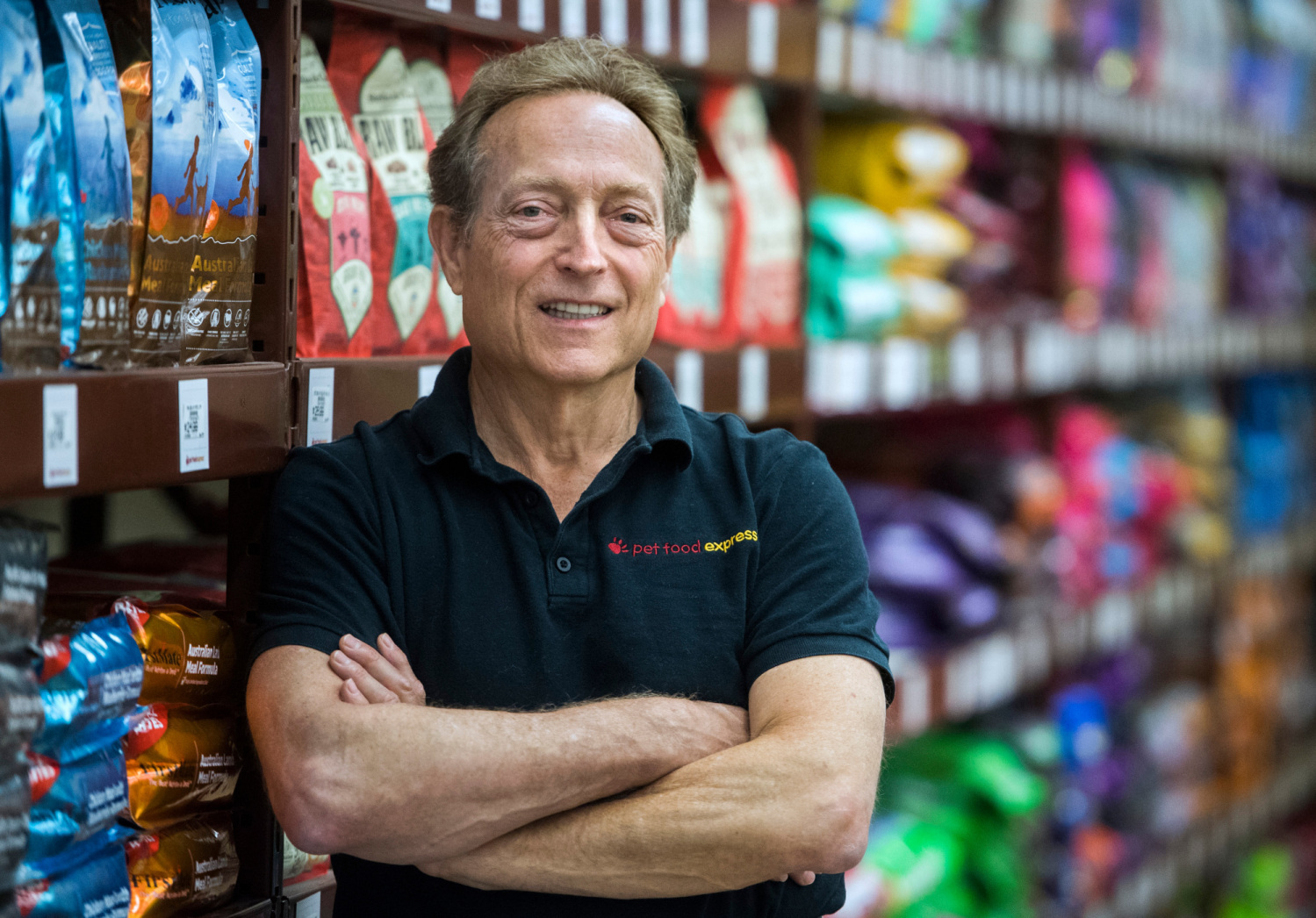 Michael Levy has watched up-close and professionally how Americans’ love for their cats, dogs and other pets has grown over the decades and intensified during the COVID-19 pandemic.

He’s the CEO of Pet Food Express, the Oakland-based independent retail chain that has sold premium pet food and supplies to dedicated pet owners since the 1980s.

Certainly, the company faced challenges in 2020. But its 64 stores throughout California were deemed essential, and people in lockdown raced out to adopt animals for company or to spend money on pampering the fur babies they already had. Pet Food Express and the rest of the pet industry reached a historic high of $103.6 billion in sales in 2020, according to the American Pet Products Association.

Levy’s own love for animals developed early. At 9, he was rescuing cats in New York City’s Central Park, and he launched his own dog-walking business as a teenager in the 1960s. Here, Levy talks about how providing personal service to customers, working with community groups and promoting animal health and happiness remains his personal and professional focus.

Q Do you have any pets now?

A We lost our French bulldog about a year and a half ago, and we lost our wonderful cat several years ago. I’m like a grandparent with grandchildren: I get to play with everyone else’s pets. I also get my dog fixes and kitty fixes at work.

Q Your biography says you couldn’t have pets as a kid because you were raised in Manhattan.

A My family lived in a little apartment in Central Park West. When I was about nine, I started bringing stray kitties home. I found them in Central Park (but) we would have to take them to the shelter.

Q When did you get your first pet?

A I started a little dog-walking business. I had one customer, and I was paid 25 cents a walk, which was a lot of money back then. But I would have done it for free. When I was 15, I got my first dog. It was a German Shepherd puppy named Baron. That led to me learning I had an ability to train.

Q What brought you to the West Coast?

A Like everyone else I grew up watching television in the ‘50s and ‘60s, and saw how wonderful the West Coast was. I started at City College in San Francisco to study to become an architect. For spending money, I became a professional dog trainer. The referrals grew. Within a year, I had to decide whether to be a full-time dog trainer or to continue my studies.

Q Did training dogs evolve into opening a pet store?

A Not right away. With two partners, I had a dog-training company. We did everything from housebreaking family pets to working with police K-9s units. We also started selling some products, including brands of higher-quality dog food that, back then, were not available in grocery stores. In 1986, we split up the business. (My partners) kept the dog training, and I kept the store in San Francisco and became a retailer at that point.

Q How did improving pet nutrition become important to you?

A Going back to the ‘80s, I would say 98 percent of pet food was sold at the grocery store. We started to carry small brands that had higher levels of meat in them, and the quality was a little better. Pretty much all the way through, I’ve been driven by what was best for the pets.

Q Why do you think Americans are so attached to their pets?

A There are huge benefits to treating pets like family. That trend started in the 1980s and ramped up in the 1990s. In the past year and a half, through COVID-19, people relied on pets for companionship. The thing about pets is that there’s a similarity to babies. Babies grow up and develop, but pets really don’t. We have a greater responsibility for them. That’s a factor in them becoming part of our family. You’re really taking care of them for their life.

Q How was your company impacted by COVID-19?

A We mostly kept our stores open, but we had to shut down our (extra) services, including our self-service dog washing stations. We had launched same-day delivery at the start of 2020. Following shelter-in-place, it grew tremendously.

Q Did your business end up growing?

A It was a total roller coaster. Right when shelter-in-place hit in March 2020, our sales were stratospheric. Then they dropped significantly for the next three months. By the end of June (2020), we had climbed our way back, and we’re doing pretty well now.

Q You’re vice president of the Independent and Neighborhood Pet Retail Association. Why are independent pet stores so important to what you call the industry “ecosystem?”

A The history of the pet industry is based on innovation coming from the independents. Customer needs are identified by the independents. They take on the products, and they grow the brands. But it’s not just the innovation, it’s that they are the source of reliable information and personal service to pet owners.

Q Why has community involvement and supporting pet adoptions been so important to Pet Food Express?

A You can attribute that to me rescuing cats when I was nine. Our employees love pets, but part of loving pets — it’s not just your pets, not just your friends’ pets, but all pets that need help.

We’ve been doing the Bay Area Pet Fair, where we partner with 100 different Bay Area shelters and rescue groups to get pets adopted. With the Kitten Season campaign, we promote fosters and raise money to rescue kittens from being euthanized. The Fill the Food Bank campaign raises money to buy pet food for food shelters to help people who are struggling to care for their pets. It could be the last important thing in their lives. A pet can be everything to someone, whether it’s a person living in a palace or someone living in a tent.

A We’re going to continue to grow. We opened a store a couple months ago in El Dorado Hills, and we opened a store in Sacramento during the pandemic. We’re negotiating six new leases. We believe in brick-and-mortar stores in the pet industry.