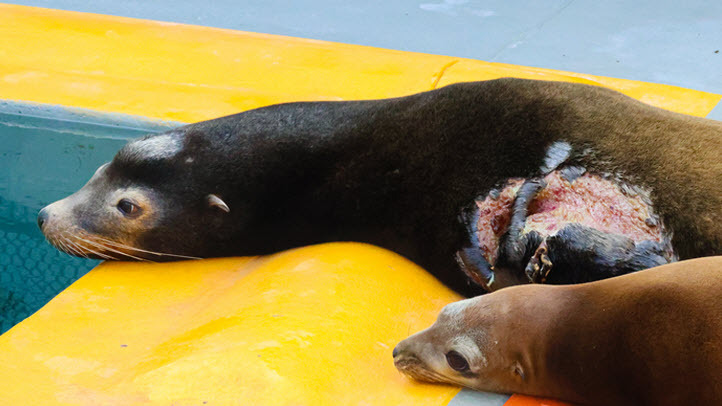 A sea lion was back home in the Pacific Ocean waters Monday after a long recovery from a severe shark bite wound as well as domoic acid poisoning, according to the Marine Mammal Center.

Volunteers with the Sausalito center released Jenya back to the wild Monday morning at Rodeo Beach in the Marin Headlands after the subadult male sea lion underwent five weeks of intense rehabilitation.

“Jenya’s road to recovery was one of the most inspiring patient cases I’ve seen this year,” Marine Mammal Center veterinarian Dr. Emily Trumbull said in a statement. “Watching this animal transform back into a feisty, thriving sea lion that’s ready to head home is a testament to the intensive rehabilitative and medical efforts the Center provides sick and injured marine mammals in need.”

enya was rescued Nov. 15 by trained responders at San Francisco’s Aquatic Park after reports of a lethargic sea lion with a large left shoulder wound. The open wound later was confirmed as consistent with a shark bite, and blood samples revealed Jenya was also suffering from domoic acid poisoning, the Marine Mammal Center said.

Domoic acid poisoning causes lethargy, disorientation and seizures and could be deadly to sea lions, the center said.

Jenya’s release is one of the highlights of the Marine Mammal Center’s more than 440 seal and sea lion patents cared for this year, the center said.