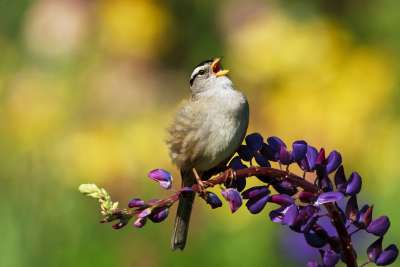 Your ears are not deceiving you: Songbirds in San Francisco have changed the way they sing this year, and in unexpected ways.

Throughout the shutdown San Franciscans reported an unusual amount of birdsong ringing through the city streets, and a scientific study has now shown that birds have indeed changed their singing habits.

San Francisco is a noisy place, but during the coronavirus pandemic the soundscape changed dramatically. In May, traffic on the Golden Gate Bridge was reduced to levels not seen since 1954, and the noise pollution on city streets was comparable to the rural parts of Marin County. Normally, San Francisco is around three times louder than Marin, the report says.

This gave songbirds in the city an opportunity to make their voice heard, and they took it, according to the study published in Science magazine.

David Luther, assistant professor of Biology at George Mason University and Elizabeth Derryberry, associate professor at the University of Tennessee, worked with a team of ecologists on the study. They discovered that while the songbirds of San Francisco increased the frequency of song, they did so at a lower volume than usual, as there was less noise to compete with. However, to residents’ ears this resulted in a perceived increase in birdsong volume.

The findings were based on a comparison of soundscapes and songs of the white-crowned sparrow across the Bay Area.

“When I saw photos of an empty Golden Gate Bridge, it struck me just how little traffic there was.” Derryberry said in the report. “I realized we were in a unique position to look at how changes in human behavior might affect wildlife and what the noise reduction might mean for the songbird we study.”

The song samples obtained in May this year were compared to previous samples from 2016 from across the Bay Area.

The researchers found that the birds responded to the quiet by producing higher performance songs at lower amplitudes, maximizing communication distance. The sparrows began singing more joyfully, with a wider vocal range as males tried to woo females, the scientists found.

“When you’re shouting at a cocktail party, your voice is not at its best,” Derryberry explained in the study. “Our findings illustrate that behavioral traits can change rapidly in response to newly favorable conditions, indicating an inherent resilience to long-standing anthropogenic pressures like noise pollution.”