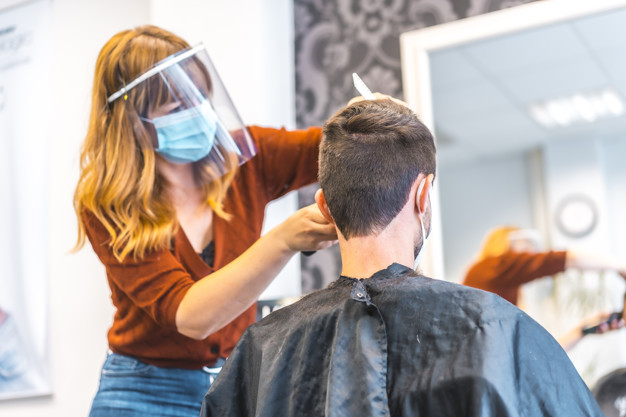 Back in March, when Santa Clara County announced that non-essential businesses had to close, James Griffiths boarded up the windows of his San Jose studio, Salon Blu.

And then he kept working.

“I vowed on day one that they were going to have to take me away in cuffs to get me to close down, and I’ll be right back to it the next day,” Griffiths said in an interview with Bay Area News Group on Wednesday. “As soon as I get out of jail, I will be right back doing it again. I told my staff that, and I’ve stuck to it.”

Despite the pandemic — and restrictions that have shuttered local hair salons and barbershops for months — Griffiths never closed shop, defying local and state health orders and risking fines and jail time in the process.

As other salon owners applied for Paycheck Protection Program loans and filed for unemployment, Griffiths ushered customers through the back door, his windows boarded up to maintain the illusion that the salon was closed.

Around half of his stylists kept working since March, and about a quarter of his customers have still been coming in regularly.

Griffiths has spaced out his stations and added extra sanitation measures, and he bought masks to hand out to customers who want them.

But, Griffiths says, over 80% of his customers choose not to wear masks, and he doesn’t force them to.

“It’s hard because we’re service-oriented, and if a client really doesn’t want to wear a mask, it’s really hard to force them to do it,” he said. “And also, cutting around the ears and whatnot, it’s really difficult.”

Despite the boarded-up windows, Griffith’s surreptitious salon services haven’t completely escaped notice. He said he has received hate mail online from other salon owners angry that he’s remained open while others have closed.

“We do not endorse any of our licensed establishments to work in defiance to the law,” said Fred Jones, legal counsel for the Professional Beauty Federation of California.

Griffiths has also gotten calls from the San Jose Police Department and the Santa Clara County district attorney’s office, warning him that there have been complaints about his continued operations, but Griffiths says that there hasn’t been any followthrough.

“San Jose PD had come by, and they said they received complaints that we were open,” he said. “They didn’t ask to come in. They didn’t bring a warrant. They didn’t threaten any sort of punishment or citation or anything like that, and really, honestly, they seemed very uninterested in enforcing any of it.”

A spokesperson for the San Jose Police Department confirmed that the department had issued a warning to Salon Blu, and said the department’s “focus continues to be education.” Deputy district attorney Angela Alvarado said the office couldn’t comment on individual cases.

In general, she said, the district attorney’s office is largely trying to avoid citing people and businesses in violation of the health code. Less than 50 citations have been issued so far, and no charges have been filed.

When people call in complaints to the health referral hotline — anything from a resident reporting a loud party on their block or an employee blowing the whistle on their employer for unsafe practices — Alvarado’s team tries first to educate the offending party. For the most part, she said, businesses comply once they’ve been made aware of what the rules are.

Business owners who remain open face the possibility of misdemeanor charges that could carry fines of thousands of dollars and up to 90 days of jail time.

“My cosmetology license would be my biggest risk, because that’s attached to my name. My establishment license — I could shut this business down and open up a new entity and have an establishment license in a few days,” Griffiths said. “I don’t want to play cat and mouse, but my main problem is that there’s been no cohesive policy in place and seems to be no coordination between the different levels of governmental agencies.”

Now that California is allowing salons to operate outside, he’s gone “mostly legal,” he said, conducting most of his salon’s business under pop-up canopies on the sidewalk in front of the building and in the parking lot out back.

On Wednesday morning, an unmasked stylist offered a haircut to an unmasked customer in the salon’s main room, its soaring white walls lined with mismatched gold-framed mirrors. The stylist declined an interview — spooked, Griffiths said, after receiving a call from the District Attorney’s office Wednesday morning.