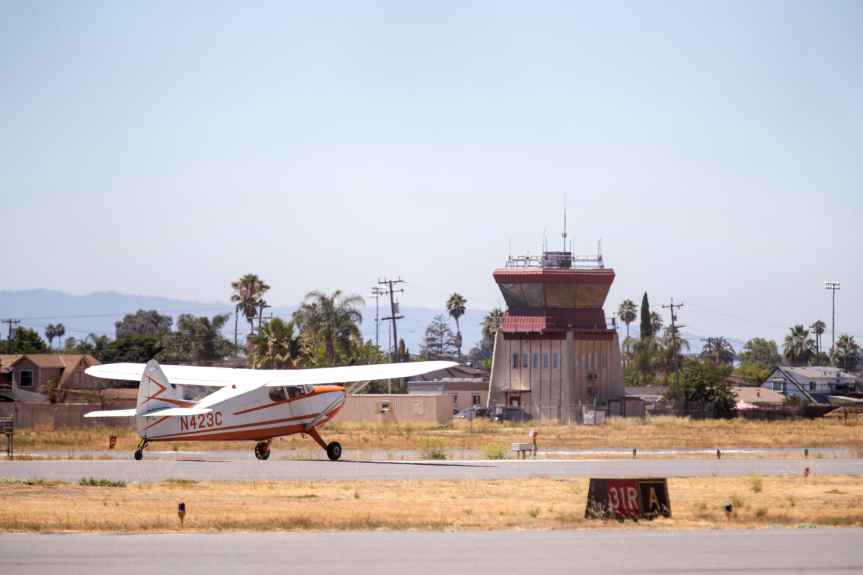 Neighbors of Reid-Hillview Airport who have long complained about the loud buzz of aircraft flying overhead, feared that a plane could come crashing into their home and stressed about leaded aviation fuel poisoning their children received a major victory Tuesday night.

Following a five-hour public hearing and discussion, the Santa Clara County Board of Supervisors voted unanimously around midnight to ask federal regulators to hasten the closure of the 180-acre general aviation airport in East San Jose and meanwhile ban the sale of leaded aviation fuel there.

“We are all in agreement that lead exposure for residents living near Reid-Hillview is unacceptable and must be alleviated,” Supervisor Susan Ellenberg said.

The requests could set off a lengthy and contentious battle between the county and the Federal Aviation Administration, which has ultimate authority over airport operations.

In Santa Monica, for instance, city leaders voted in 2016 to close its airport in two years. But the FAA legally challenged the action and a resulting settlement will see the airport remain open until 2028 — a decade longer than the city desired.

Santa Clara County Executive Jeff Smith said Tuesday he was preparing for “a challenge that will take considerable fortitude.”

Santa Clara County supervisors in 2018 took their first step toward closing the county-owned airport when they voted to stop accepting grants from the FAA — a move that the agency strongly opposed. That decision paved the way for the county to close the airport in 2031, when its grant obligations to the FAA would expire. The supervisors’ Tuesday’s decision aims to expedite that process.

The move comes just two weeks after the county released a new study declaring that leaded fuel used by piston-engine planes that fly in and out of the airport was contributing to elevated levels of lead in the blood of children living around Reid-Hillview.

The county’s push to close the airport early disappointed aviation advocates who want to keep it open as long as possible and touted last weekend’s transition to unleaded fuel at Reid-Hillview as a solution to lead exposure concerns.

“This will be an expensive and unneeded litigation that will go on for years,” Michael McDonald, a private pilot who flies out of Reid-Hillview, said about the closure effort. “A significant solution is here now and a full solution will be here long before litigation is ever completed.”

Although lead-based automobile gasoline was fully phased out more than two decades ago, the same standards were never set for aviation fuel. The piston-engine planes that use Reid-Hillview run on the last type of gasoline permitted to contain lead in the U.S.

Efforts by Santa Clara County officials and East San Jose community members to shut down Reid-Hillview began nearly four decades ago. Congresswoman Zoe Lofgren was one of the first elected officials to call for the airport’s closure in the mid-80s when she was a county supervisor.

Calls for closure of the airport heated up in recent weeks after the release of a county-commissioned study that analyzed blood samples of 17,000 children under the age of 18 who lived within a mile and a half of the county-owned airport from 2011 to 2020. The study concluded that children living closest to the airport had higher levels of lead in their blood than those living farther away.

“In this study, we show repeatedly across hundreds of independent tests that the lawful buying and selling of lead-formulated aviation gasoline appears to impose harm on innocent others,” said Sammy Zahran, a Colorado State University professor who conducted the study.

According to county figures, 52,000 people — predominately lower-income Latino and Vietnamese residents — live within a mile and a half of Reid-Hillview Airport, including more than 12,000 children. About two dozen schools and childcare centers are also located in that same vicinity.

Reid-Hillview supporters argue that the airport serves many essential needs, including as a host to San Jose State University’s aviation program and as a critical reliever to the Mineta San Jose International Airport.

Seeking to quell concerns about lead emissions, fuel providers at the airport first began selling unleaded fuel to pilots this past weekend, but it’s unclear how much effect it will have on overall lead emissions around the airport. Pilots can still opt to purchase leaded fuel at this point, and the unleaded product cannot yet serve all aircraft.

Nationally, only one company has received clearance to sell its unleaded aviation gasoline, and higher-end airplanes that require premium gas cannot use the unleaded option currently available. Although a premium product has been created, it is unclear how long it will take to get through mandated testing and make it to the market.

Still, aviation business owners, private pilots and some elected officials are holding out hope that a transition to unleaded fuel will solve the lead exposure issue at Reid-Hillview and prevent the airport’s pending closure.

“The airport is not the enemy, the lead is the enemy,” Supervisor Mike Wasserman said. “Remove the lead and we’ll stop the poisoning.”