She had a baby and bought her own business in the Bay Area. Then the coronavirus pandemic started 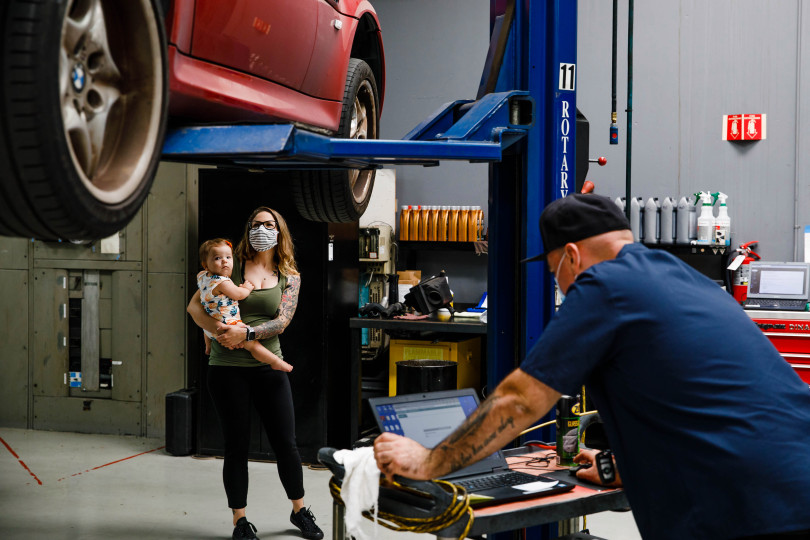 Erin Gomes’ dream of owning her own auto shop finally came true when she purchased the Mountain View business where she’d been hired as a receptionist more than 16 years earlier.

Not long after giving birth to her second child, she was signing the incorporation papers to take over and open up as Bavarium Autoworks. It turned out her timing couldn’t have been worse.

“And then two weeks later the stay in place order happened,” Gomes said. “Luckily, it’s an essential business so we were able to stay open, I can only imagine if I had bought a hair salon and then had to shut down two weeks later.”

The COVID-19 pandemic has thrown Gomes’ new business, and her growing family, into chaos as they struggle to adapt to health regulations, shuttered schools and the worst economy since the Great Recession. She joins the thousands of Bay Area small business owners who have been rocked by the pandemic, caught between the need to stay afloat and protecting themselves, their employees and their customers from the virus.

“It’s unbelievable. You almost have to laugh because what else can I do,” she said.

Gomes didn’t start out a car fanatic eager to own her own auto shop. When she first started at the Mountain View shop, she was just answering an ad in The Mercury News for a receptionist. The shop, previously called CarBahn Autoworks, was owned by Steve Dinan, an internationally recognized BMW specialist, and catered to European cars.

Gomes took to the job, and when there was an opening for a service advisor she was asked to step in. After a stint working at a BMW dealership, Dinan about four years ago asked Gomes to come back to run the Mountain View shop — he owns a second location in San Jose.

“People would call in and I would attempt to answer their question and I literally have someone say — on multiple occasions — ‘Can I talk to a man?’” she said. “It’s hard to be a woman in this industry and to gain people’s respect because they can’t imagine that I would ever know or want to know anything about cars.”

When she went on maternity leave before the birth of her second child, Gomes and her husband, a shop foreman at a BMW dealership, decided to open their own business. She called the CarBahn owners to say she wasn’t coming back.

“They said, ‘Why don’t you buy this one?’” Gomes said. “Within a month we were proud owners.”

The shop does everything from oil changes to engine replacements. It also specializes in performance tuning, making sports cars run even faster, she said, although Gomes herself opted for more low-maintenance cars, like older 3-Series and 5-Series BMW sedans.

Although they’re allowed to stay open, business has slowed at Gomes’ shop, where she works with her husband and one other employee. Stay home orders have idled the cars of those who still have a job, delaying the need for auto repairs and maintenance. Gomes said she’s lucky to still have regulars coming in.

Those are the customers who have known her since before she got married, before the birth of her son who is now 6 years old or her newborn daughter. And she has seen them through marriages, divorces, new jobs and other major milestones. They call her trying to schedule maintenance checks or to ask her to install new tires, even though they don’t need them.

“I’ll go bankrupt before I tell somebody they need something that they don’t,” she said.

While she waits for business to pick up, Gomes has been applying to every pandemic aid program she can find. Her application for a Paycheck Protection Program loan was denied because she was told she needed payroll from at least February 15. A disaster loan from the Small Business Administration was first approved, then denied without explanation, she said.

She did receive money from California’s worker’s compensation fund for personal protective equipment for the shop, she said. She hasn’t heard back on applications for grants and aid from the city of Mountain View or Facebook’s small business grants fund.

In the meantime, she’s figured out a routine, answering customers’ calls and emails while homeschooling her 6-year-old, making sure he gets his exercise time in the morning. Now that it’s summer she makes sure he reads to his baby sister, and he goes into the shop with his dad a couple of times a week.

“I’m making it through a pandemic with a newborn and a new business,” she said. “It can only get better, it can’t get worse.”

She paused. There is one thing that could make thingsmore complicated, she joked.

“All I need to do is get pregnant again.”