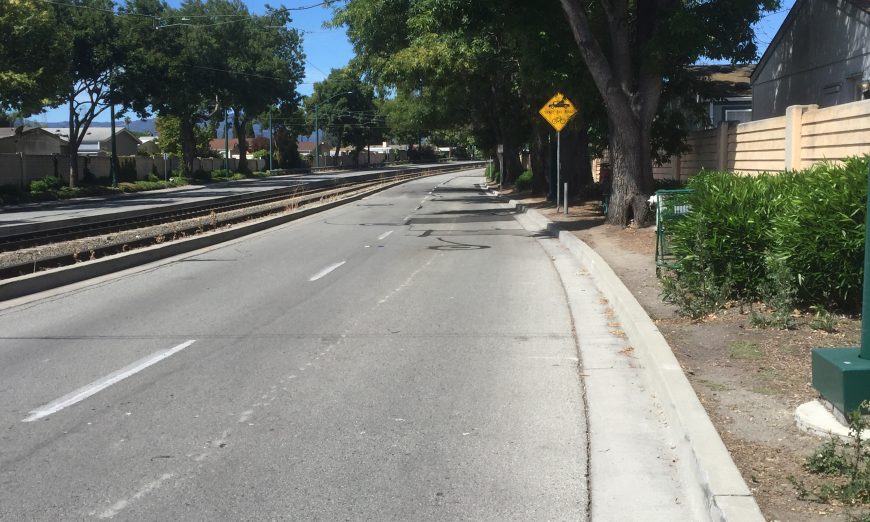 Among the sweeping societal changes brought on by the COVID-19 pandemic, traffic volumes have greatly diminished as many office employees continue to work from home. This traffic reduction was noted among Sunnyvale residents who live along Tasman Drive between Fair Oaks Avenue and Lawrence Expressway, who for years have lamented the 1,600 foot gap in sidewalks on that stretch of road. The missing sidewalks are due to a cramped four-lane vehicle corridor that shares space with a light rail line that bisects it in the middle, leaving little space for pedestrians and cyclists.

“When the Tasman Light Rail Line was extended into Sunnyvale to its current terminus in Mountain View in the late 1990s, there was insufficient width along the Tasman corridor to install complete sidewalks and bicycle lanes without purchasing and demolishing existing mobile homes that back onto Tasman Drive and removal of all mature trees for long segment,” Sunnyvale City staff explained in a report. “Today’s roadway configuration reflects the compromise, with large gaps in the sidewalk along both sides of Tasman Drive and lack of bicycle facilities.”

Ari Feinsmith, who’s lived at the Casa de Amigos mobile home park on Tasman Drive all his life, said that the lack of sidewalks has been an ongoing issue resulting in many near accidents between motorists and pedestrians.

“Consistently, people in my neighborhood have been wishing that there was a continuous sidewalk,” said Feinsmith.

Feinsmith said that at one particular section, pedestrians trying to cross all four traffic lanes as well as the two light rail tracks have great difficulty because there’s no advance warning of when a train may come, and if the road is full of vehicle traffic when a train is present, there’s no safe place to wait until it passes. He said it’s not an uncommon sight to see pedestrians walking alongside the roadway gutter with cars whizzing past at 45 mph.

A civil engineering student at Mission College who wants to specialize in transportation engineering “to make streets safer and more enjoyable for all,” Feinsmith began speaking with his family and neighbors about the issue before deciding to broaden his efforts by creating a website devoted to advocating for a temporary lane closure that would allow for safe walking and biking on Tasman. Through that and other forms of outreach he was able to gather 30 letters of support for the lane closure.

Although Feinsmith said that most residents he spoke with were supportive of the lane closure, some said that there’s generally too much traffic on Tasman Drive to lose a lane. Others hope that the lack of one lane will promote walking, biking and use of VTA.

City Council had approved the temporary eastbound Tasman Drive lane closure on June 30 for purposes of implementing the temporary sidewalk for a 10-month period, and Public Works plans to execute the closure on Aug. 24. The project will cost $30,000, which includes an ADA curb ramp and the ongoing maintenance of lane barriers. Dennis Ng, transportation and traffic manager, said alert signs of the pending lane closure had been put up to warn motorists, and that a subsequent electronic board will be added to remind drivers to move out of the lane.

“We’ve been collecting data before the closure to have a baseline and will be monitoring throughout the process,” said Ng. “We’ll be conducting counts of cars, drive times and the number of pedestrians and cyclists that are using it.”

Council voted in favor of the measure 6-1, yet one point of contention was deciding what exactly was meant by “temporary.” Although traffic remains lower due to COVID-19, that reality is subject to change. Some residents such as Feinsmith hope that the closure will ultimately become permanent after the 10-month period.

“We’re talking about adding a service to what goes on right here and it’s extremely difficult to remove a service,” said Councilmember Glenn Hendricks.

Ng said that the ongoing monitoring will be reported to Council and staff will advise whether the 10-month period should be extended due to continued low traffic conditions. The implementation of a permanent pedestrian lane would require CEQA analysis, and additional funding.

“I think it’s good that’s it’s temporary,” said Feinsmith. “I think that people are going to really like it and there will be a lot of community support to keep it there. I hope that something permanent will be implemented in the future.”