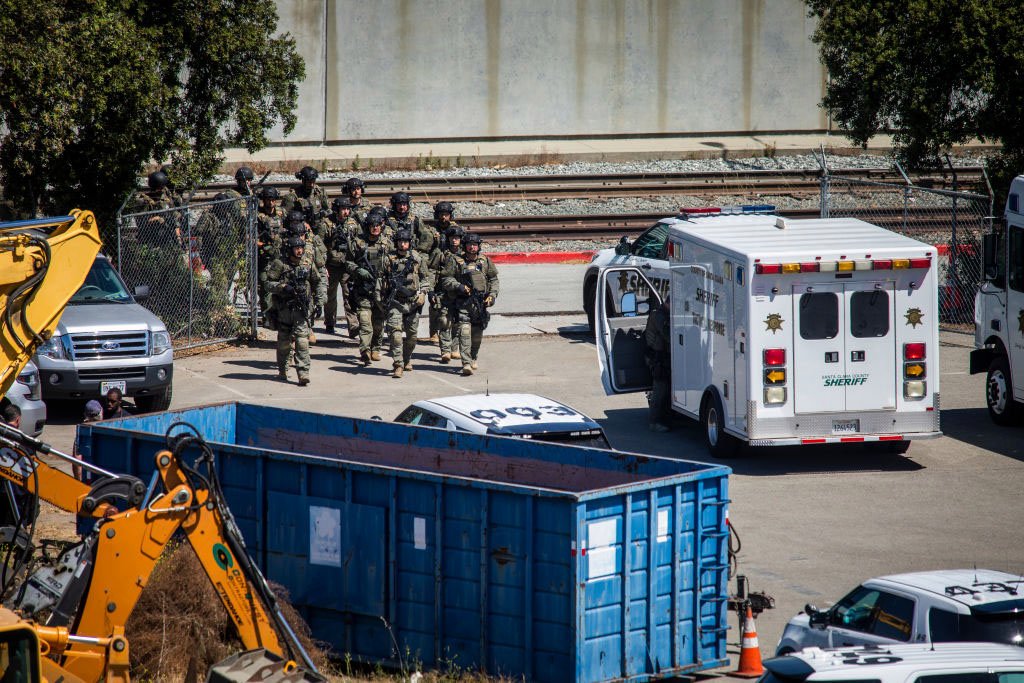 As a mass shooting rampage unfolded inside a Valley Transit Authority maintenance facility in San Jose last week, a Santa Clara Sheriff’s deputy can be heard on body camera video assessing the situation with his team as they approach the building,

“We need access to these doors,” one deputy said.

Newly released body camera video shows that a VTA supervisor was escaping the building just as law enforcement was looking for a way in.  After making sure the man was not armed, a deputy asks, “Are you able to open that door for us?”  The manager had a key card and was able to allow the deputies into the building. It remains unclear how deputies might have gained access had that employee not have been there to let them in.

At workplaces across America, varying security systems, including multiple locked doors, can delay first responders from gaining access in times of crisis.

“If you make a facility too much of a fortress, you can slow the bad guy down, but then an unintended consequence is you slow the good guys down as well when they get there because they’re not able to get in,” said Tom Foley, who chairs the Global Security and Intelligence department at Embry Riddle Aeronautical University in Arizona.

Foley has been studying security risks and mass shootings for more than 20 years and was awarded a grant by the National Institute of Justice to research how to better protect public schools from mass shootings.

“The Sandy Hook shooting took six minutes from first shot to last shot – and over 20 people were killed,” said Foley.  “So cutting seconds off police response may very well save a few lives in an active shooting situation.”

“We’ve constructed a way that can send the ability to unlock the door in a digital fashion,” said Kamkar.

As a teenager, Kamkar achieved overnight fame, and some trouble with the law, when he wrote a few lines of code now known as the ‘MySpace Worm.’  His code forced every MySpace user looking at his profile to automatically send Kamkar a friend request and added the phrase “Samy is my hero,” to their MySpace pages.  Overnight, Kamkar had a million friends and worshippers.  MySpace was forced to temporarily shut down its site in order to close the technological loophole that allowed Kamkar to inject his work.   The entire internet took note of the breach.

Now, Kamkar is the co-founder of Openpath, which sells software that allows users to remotely open and lock doors as well as share a sort of ‘digital key’ with anyone they’d like in order to offer them access as well all by just using your smart phone, similar to how you’d send a text or a picture.

“Instead of sharing the photo, you’re sharing a door.” said Kamkar.  Utilizing a smart phone, users are able to share digital links with law enforcement so that they might be able to can unlock a building’s doors during an emergency.  “We’re actually taking advantage of that sharing technology that’s built into every mobile device out there,” said Kamkar.

It’s unclear how deputies would have entered the transit maintenance facility, and ultimately reached the lone gunman, had that VTA employee not given them his key card.  The Santa Clara County Sheriff’s office tells us that it has tools to breach buildings, however, it couldn’t say how long it would have taken deputies to force their way inside or whether any of those who responded to the massacre actually had any of that equipment with them.

A spokesperson for the Valley Transit Authority said: “Discussions are in progress to determine what, if any, additional security protocol can or should be put into effect, or if any changes should be made.”

Foley acknowledges that mass shootings are rare – on the order of being struck by lightning.

“However, if it does happen and either security’s too light or is at a level where it impedes law enforcement response, obviously you have the potential for injury and loss of life,” he said.

“So you really have to when you’re designing a physical security system, try to balance the slowing people down, but still accounting for a way to let the first responders access the area as quickly as possible.”