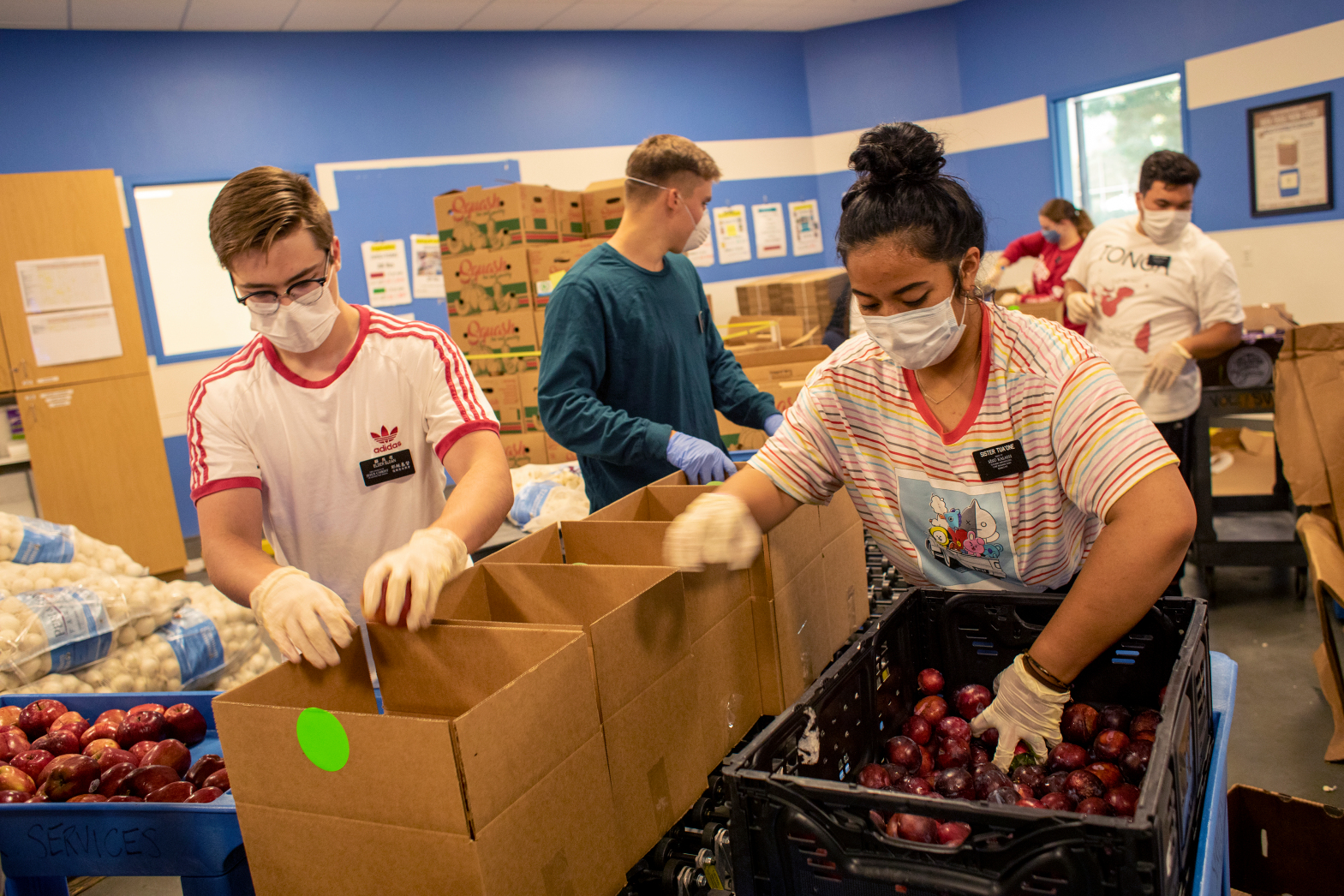 As the coronavirus pandemic overwhelms hospitals and claims dozens, sometimes hundreds, of lives each day in California, the deadly disease is also exacting a punishing economic toll on residents. And in a particularly cruel twist, it is those who were struggling the most before COVID-19 struck that are now being hit the hardest.

According to a new survey from the Public Policy Institute of California, 43% of households making less than $40,000 a year have seen their earnings shrink. And with little to nothing to spare, 42% of low-income families are cutting back on food. In contrast, 36% of households earning $80,000 or more have seen their work hours or pay reduced, and just 12% have had to scale back at the grocery store.

The numbers reinforce what food banks and the throngs of cars lining up at their doors have been saying for months: While wealthy tech workers continue to clock regular hours from home, thousands of poor families in one of the richest regions of the country are being forced to decide between basics like food and rent.

Most lower-income families say they would have trouble affording a $1,000 emergency right now, and many don’t have protections such as paid sick leave, meaning they are at risk of losing income if they or someone in the family becomes ill. While 84% of those making more than $80,000 have paid sick leave and health insurance, just 59% of workers earning below $40,000 have paid sick leave, and just 48% receive health coverage. Most also don’t get retirement savings or help with education or training.

Latinx households are more likely than Asian Americans, African Americans and Whites to be very worried about both illness and the coronavirus hurting their family’s finances.

“It is hitting the immigrant Latino population very, very hard on all kinds of levels,” said Salvador (Chava) Bustamante, executive director of Silicon Valley-based Latinos United for a New America.

Recently, he talked to a woman who ran a small house-cleaning business but whose work has dried up.

That’s especially true for undocumented immigrants who are trying to scrape by without much of the safety net offered to citizens. One man, Bustamante said, was selling snacks and whatever he could on a street corner but got infected with coronavirus and died. The people in the house where he had rented a room cobbled together enough money between them to pay for his cremation.

Unlike other racial and ethnic groups, a slim majority of Latinx residents think children today will grow up to be better off than their parents. But 63% of Californians think the opposite is true, including majorities of White, Asian American and African American residents, and all income brackets.

And there is widespread agreement among residents that the gap between rich and poor people in their part of the state is getting wider. Just 6% think it is narrowing. Most Golden State residents agree that racial and ethnic discrimination contributes either a lot or a fair amount to economic inequality. That sentiment is particularly strong among African Americans.

Bustamante thinks the way the coronavirus vaccines are distributed also has the potential to deepen inequities. Many Latinx residents are essential workers at restaurants and retail stores where they must interact with coworkers and the public, putting themselves at risk. And yet, most won’t be among the first to receive a vaccine.

“I think the people we work with should also be made a priority,” he said. “The virus continues to spread in this community.”

Most residents also don’t think the economy is going to get much better in the near future. Just 40% anticipate a good financial situation in the next five years, and most expect periods of depression or widespread unemployment. The vast majority say a lack of well-paying jobs is a big problem — significant enough that some are considering fleeing the state altogether.

“Californians have a gloomy economic outlook, and one in four are seriously considering leaving California due to a lack of well-paying jobs in their region,” PPIC President Mark Baldassare said in a statement.

Yet despite their gloomy outlook, 58% of residents approve of how Gov. Gavin Newsom is handling the economy.

When it comes to improving the economic standing of residents, more than 80% of Californians, across party lines, want to see more government funding for job training. Most residents also support boosting child care funding, a government health insurance plan like Medicare, expanding the Earned Income Tax Credit, free college and eliminating college debt. Half even support the idea of guaranteed, or universal basic, income, an idea currently being tested in Stockton.

After one of the most contentious and drawn-out election cycles in history, the survey also found widespread support for voting, agreeing, Baldassare said, that the practice “gives people like them a say in government.”

The survey findings are based on interviews conducted by Ipsos in English, Spanish, Chinese, Vietnamese and Korean with 2,325 adult residents of California between Nov. 4-23, with a sampling error of 3.1%.