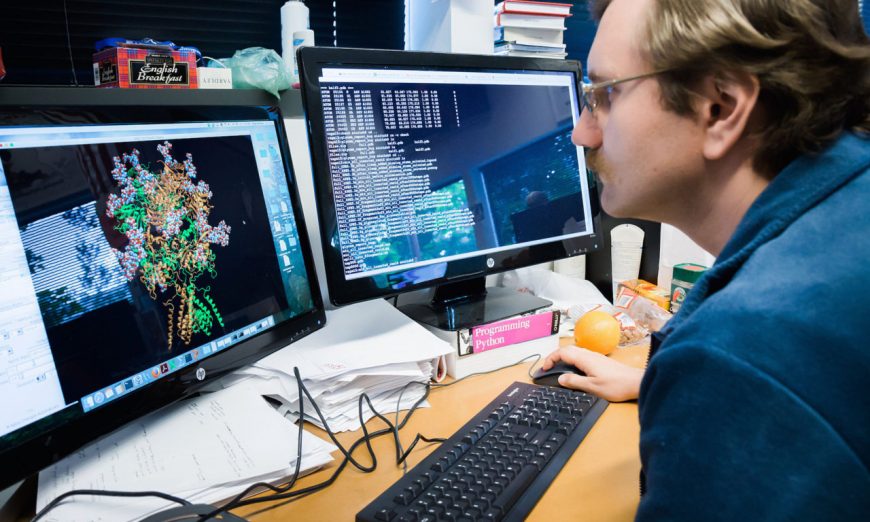 At the end of May, Post Era reported that 28 compounds identified by its showed ability in models to inhibit COVID-19  — eight showing a high ability to do so. These eight will be manufactured and tested. The drug candidates were culled from 7,000 possible compounds examined by Post Era’s algorithms.

The year-old company’s virtual chemistry* system designs compounds with the best chance of being effective in treating disease and then builds the recipe for making them. Developing recipes for making compounds takes chemists weeks. Post Era’s platform can develop thousands of recipes in a matter of days.

Post Era uses algorithms that ‘learn’ from data that is provided and subsequent experience — machine-learning — to compress the job of identifying chemical compounds with therapeutic potential. Post Era’s software can process and remember millions of examples to quickly identify the best candidates for testing.

The longest, costliest part of drug discovery is sorting through haystacks of possibly therapeutic molecules looking for the effective ones, and then figuring out the best way to make them, explained co-founder Alpha Lee.

“Preclinical research takes four to five years to develop molecules,” said Lee. “Modern technology can reduce that by half. We can cut it down to two months.” This also benefits research that has been neglected, he adds, such as developing new types of antibiotics.

The company has enlisted hundreds of scientists around the world in a COVID-19 “moonshot” program to suggest theoretical compounds that would bind to the virus and Post Era’s platform identified over 500 with the best chances of working, least likelihood of being toxic, and simplest to manufacture.

The Value Chain of Virtual Chemistry

Designing drugs requires an understanding of how infectious agents work. Some of the understanding that underlies Post Era’s work comes from another crowd-sourced project in the Moonshot consortium, Folding@Home (FAH).

Folding — literally — is the process by which proteins adopt shapes that enable them to function. Proteins spend more than 90 percent of folding time in intermediate configurations, which lets them evade the immune system.

“It’s like making a journey across mountains,” explained Bowman. “We could have one hiker explore a million routes to make a picture of what’s in that valley. Or we could have a million hikers explore a piece of the valley and then assemble those into a map.”

One of the things FAH is modeling is the protein on the COVID-19’s virus’ “spike,” which binds with human cells.

“It’s a very clever mechanism,” said Bowman.  “It’s buried. The proteins open up to infect cells. We don’t know much about that open state, how it opens and the stages on the way.”

The project started as a 2006 graduate project by Bowman, working with his advisor Vijay Pande, FAH’s first director.

The project was already running simulations of proteins involved in other diseases, including Alzheimer’s, cancer and Ebola virus.

“We were able to pounce on Covid-19 because of this kind of crowd-sourced research,” Bowman said.

“This is the very edge of what is scientifically possible. And it allows people who aren’t scientists or researchers …[to] advance those efforts. I hope people will appreciate the importance of this research and stick around. There are still big problems to be solved.”

No scientific, engineering or computer science expertise is needed to join the Folding@Home effort. All you need is a computer running Windows, Linux or Mac OS/X and a browser.

The simulations run on both CPUs and GPUs. Bowman notes that Intel, NVIDIA and AMD are project supporters and, with other tech giants, have been instrumental in helping to improve the software so simulations run as fast as possible.

To join, visit Folding@Home.org and click on “Start Folding.” The site will identify your computer and show you the right software to download.

Installation takes less than five minutes and the application starts running automatically. When your computer contacts the server, it downloads a piece of a simulation. As they complete, simulations are uploaded to the project’s database servers.

Simulations run in the background and you can have them run all the time or only when the machine is idle.

*Virtual — computational — chemistry uses computer simulations to calculate structures and properties of molecules. Computational chemistry was an early use of digital computers in the 1950s.