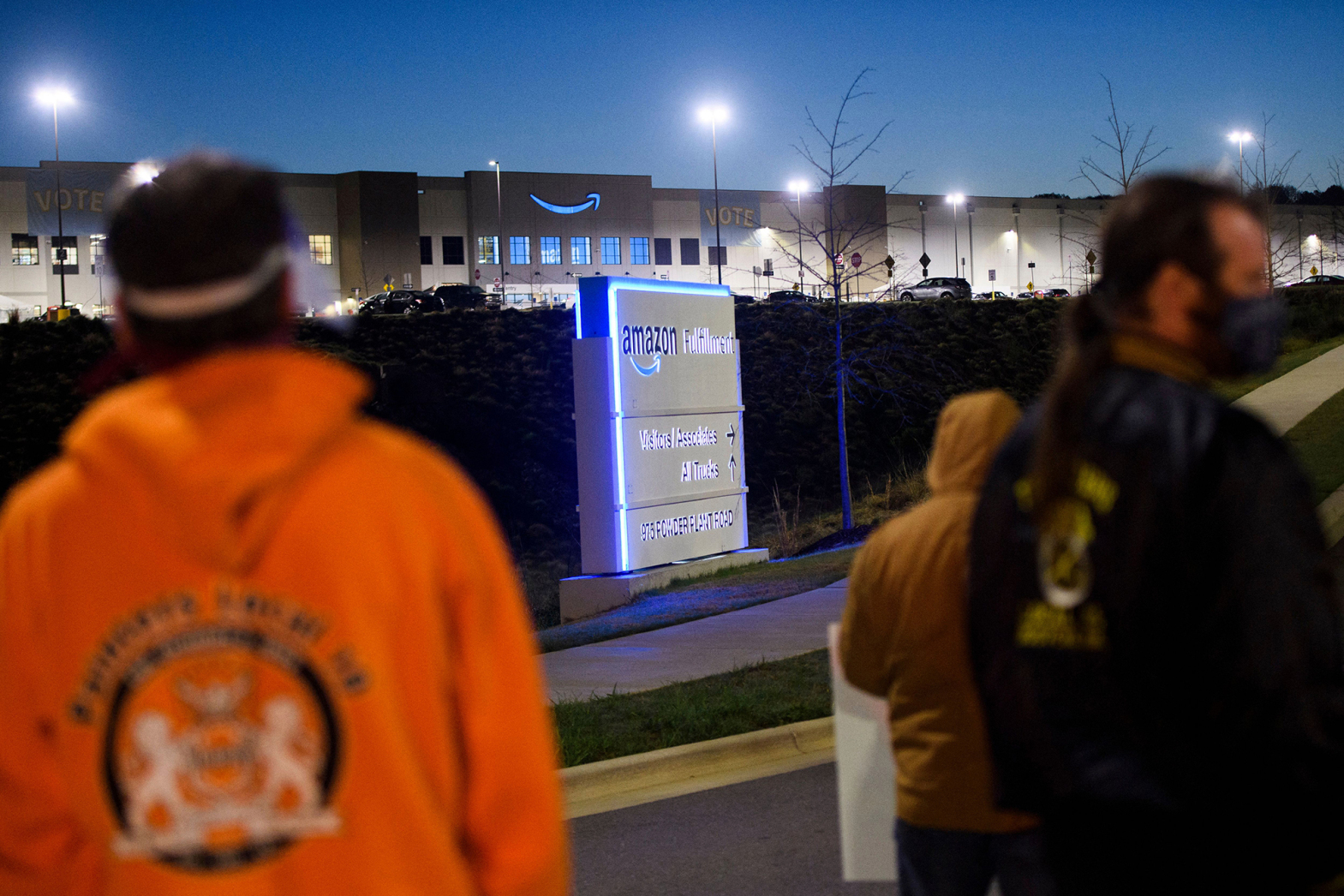 Amazon has gained enough votes to defeat a union drive that would have established the company’s first US union, according to an ongoing tally of the vote.

The vote count against unionization reached over 1608, the simple majority needed for either side to prevail, on Friday. The Retail, Wholesale and Department Store Union, which is behind the Bessemer union drive, may contest the results.

The union election, which took place by mail over a nearly two-month period due to the pandemic, received national attention, with celebrities, politicians — including President Biden — and employees at other Amazon facilities all lending public support to workers driving the unionization effort.

Amazon, which has previously fended off unions in the United States, waged an online and offline campaign to combat the drive, including posting signage in bathroom stalls and pulling workers into meetings before the start of the election to convey its anti-union stance. The company’s messaging around how it pays and treats its workers only grew more aggressive in public in the final days of the election, with the company feuding on Twitter with Senator Bernie Sanders and Rep. Mark Pocan of Wisconsin.

For Amazon, and its workforce, the stakes of the vote were incredibly high. A successful union drive in Bessemer could have encouraged Amazon employees around the country to make similar pursuits, potentially changing how Amazon works with many of its 950,000 US-based employees.

According to Retail, Wholesale and Department Store Union, which is behind the Bessemer union drive, the NLRB received 3,215 ballots. About 500 of the ballots are being challenged by either the NLRB, the union or Amazon, the union told CNN Business while noting that Amazon challenged ballots at a rate of nearly 4 to 1. The public tally of the votes, which is being conducted at the NLRB’s Birmingham, Alabama office and broadcast over Zoom to select viewers including press, began Thursday afternoon after more than a week of reviewing the ballots for possible challenges over factors including improper job classification, ineligibility based on dates of employment, and more.

Some Amazon workers in Europe are unionized, but this was the largest effort by US-based Amazon workers to unionize thus far. In Delaware, a small union election was held at a warehouse in 2014 but resulted in workers rejecting representation. The Bessemer union election, however, was much larger in scope, with nearly 6,000 warehouse workers at the one-year-old facility were eligible to vote.

The effort was galvanized by a group of employees at the Amazon facility, as well as unionized workers from other local plants and facilities, including poultry workers, who are already represented by RWDSU.

It was an uphill battle from the start. Not only did the workers take on the second largest employer in the United States but they are based in the South, where union representation is lower than in other parts of the country.

While the pandemic has been a boon for Amazon’s business, safety precautions related to the virus, as well as general workplace conditions, have been a factor behind a more general employee uprising at its facilities. Workers at Bessemer were also motivated by the ongoing racial justice movement, according to Stuart Appelbaum, president of the RWDSU, who said roughly 85% of the workforce is Black. “This campaign has been as much of a civil rights campaign as it has been a labor campaign. We’re talking about basic dignity for working women and men,” Appelbaum said in February.

The Bessemer union push once again cast a harsh light on the realities of working for Amazon, including from recent testimony by one of the facility’s workers before the Senate Budget Committee. Jennifer Bates, a vocal organizer behind the union effort, described “grueling” work conditions.

“We take employee feedback seriously, including Ms. Bates’, but we don’t believe her comments represent the more than 90% of her fulfillment center colleagues who say they’d recommend Amazon as a great place to work to friends and family,” an Amazon spokesperson said in a statement following Bates’ testimony. The spokesperson added that Amazon employees “earn at least $15 an hour, receive comprehensive healthcare and paid leave benefits.”

Outside of its Bessemer workforce, the company continues to face pressure from its workers at home and abroad. Last month, unionized workers in Italy went on strike over working conditions; a German union went on a four-day strike over wages. In the United States, more than 1,000 warehouse workers have contacted the RWDSU union in recent weeks, Appelbaum has said, amid all the attention on the Bessemer effort.