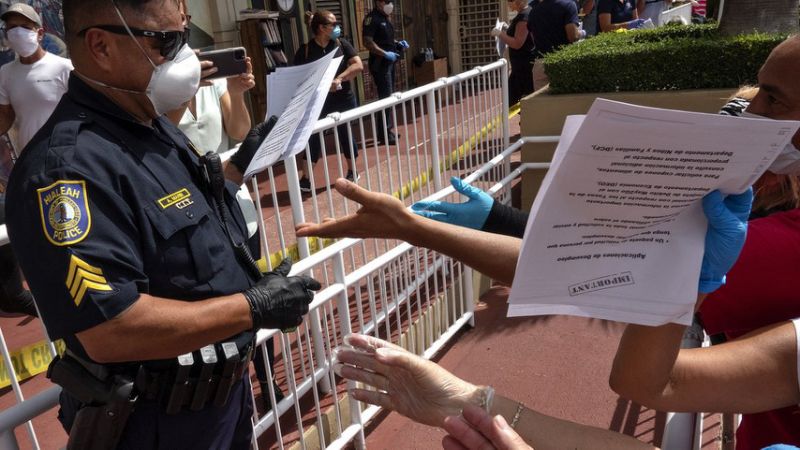 A further 4.4 million Americans sought unemployment benefits last week as the economic toll from the coronavirus pandemic continued to mount.

The new applications brought the total number of jobless claims since mid-March to 26.4 million.

That amounts to more than 15% of the US workforce.

However, the most recent data marked the third week that the number of new claims has declined – a sign that the worst of the shock may be over.

“While this week’s 4.4 million jobless claims are staggering, there are signs that the pace of layoffs has reached its peak,” said Richard Flynn, UK managing director at financial service firm Charles Schwab.

“The key questions at this point are when can the economy reopen and what happens when it does?”

Economists have warned that the world is facing the sharpest slowdown since the Great Depression in the 1930s.

In the US, the economy is expected to contract 5.9% this year, according to the International Monetary Fund. The surge in jobless claims over the last six weeks exceed the number created in the near-decade of expansion that ended in February.

In response, the US government has approved more than $2 trillion in rescue funds, expanding eligibility for unemployment benefits and increasing the payments.

But many people have had trouble getting through to state offices processing the applications.

“It’s very frustrating because you have no control and no information. You already have so much anxiety about Covid-19, you know the economy’s falling apart and I don’t have much left in savings – maybe about a month left.”

A $349bn relief programme for small businesses ran out of fund within two weeks.

Reviews subsequently found that roughly two-thirds of the money went to large, publicly traded companies rather than the small firms it was intended for.

“We’re just waiting,” said New York restaurant-owner Larry Hyland, who had hoped the programme, which provides loans that do not need to be repaid if the firm meets certain conditions, would help his Brooklyn-based beer garden, Greenwood Park.

He said he had completed all the paperwork to be ready to file as soon as banks started to accept applications at the start of April, but he hasn’t received a reply, accept for a courtesy confirmation.